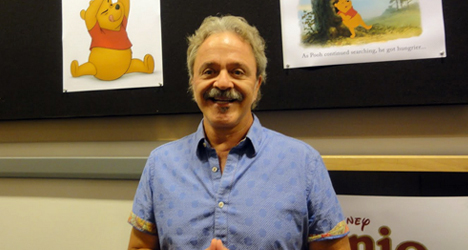 We’re proud to introduce DisneyExaminer Audio, exclusive audio reports that will feature Disney and Disney-related talent. Make sure to subscribe on Anchor or wherever else you listen to your podcasts for future episodes.

Right on the heels of Comic-Con, Disney is about ready to release its next feature film that takes us back to the Hundred Acre Wood. And what better person to take us there than one of its “official” residents.

Jim Cummings had his start in voice acting when he was chosen to take over as voice of Winnie the Pooh in 1988 and Tigger just one year later. Since then, he has amassed more than 400 other voice roles ranging from TV, films, video games, theme parks, and more. However, he credits his honey-filled, bouncy roles as his professional start in voice acting and keeps the characters close to his heart.

We had the opportunity to chat with Jim just before Comic-Con this year to chat about his work and his return as Pooh and Tigger in “Christopher Robin,” alongside Ewan McGregor and Haley Atwell. Listen to our audio report below.