When we first meet Star Wars’ Han Solo in “Solo: A Star Wars Story,” we also have the opportunity to see the beginnings of other Star Wars famed icons including the one and only Millennium Falcon.

As the story of “Solo” goes, the Falcon originally belonged to Lando Calrissian (played by Donald Glover). It was that critical piece of information that visual designers used to create the interiors and exterior of that ‘piece of junk.’

Design supervisor James Clyne said, “When redesigning the most iconic ship in the galaxy, how exactly do we do that without losing the thing that makes it iconic?”

For the exterior, Clyne and his team went to the script itself. “The script describes it (Millennium Falcon) as a sports car in a junkyard,” said co-producer John Swartz. Mock-ups of the new Falcon started to emerge with ideas from designers that included larger thrusters in the back, bigger fins that resembled a sports car’s spoilers, and most importantly – a new paint job.

And just like a sports car, the team actually pitched around a version that had the Falcon painted in flames. 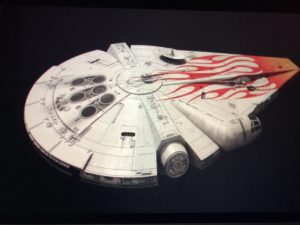 For the interior, designers thought of the character of Lando and his personality and style. “It’s so much of him,” said Joonas Suotamo (who plays Chewbacca in the film). From the yellow cushions, the closet that includes all of his iconic capes, and to the bar and Holochess board, the Falcon was designed to be a party ship as Lando is the life of many parties in this Star Wars galaxy.

You can watch a full behind-the-scenes video of the redesigned Millennium Falcon and much more that’s included in the special bonus features for “Solo: A Star Wars Story” available now on Digital HD and Blu-ray.