When Disney animators were tasked with creating what a visual representation of the internet would look like for “Ralph Breaks The Internet,” they didn’t know where to start. The “net” is just a bunch of bits of code and has no physical look, so animators at the studio needed to find a reference point to then create the rest of the setting and people to fill it in the “Wreck-It Ralph” sequel.

Their research eventually led them not too far away from their Burbank, California home to downtown Los Angeles to a building called One Wilshire.

“Little do people know, like us, that this building houses the entire internet hub for the West Coast of the United States,” said art director for environments Matthias Lechner. “Every internet connection started on this coast needs to pass through this point.”

The rooms the team explored had miles of cable elevated by metal trusses that wound its way all around and through walls. “It all looked like roadways and skyscrapers to us,” Lechner continued. And it was in that moment that they found their inspiration to visually create the internet in city form. 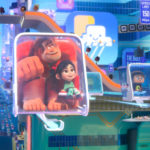 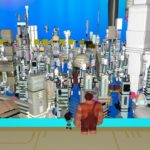 The internet-city you see in the film is grand in scale, just like the other sets you see in Disney’s animated films like “Zootopia” or “Big Hero 6.” Just like a real city, there are back streets, apartment blocks, shopping complexes that might have some familiar names to them like Amazon, Google, and more. “With using real web company names, we wanted to make the internet familiar in our world because it’s something that’s already familiar to us in the real world,” said Larry Wu, head of environments.

As for the people who populate the internet, that needed even more creative thinking. While digital characters like Ralph and Vanellope can live and occupy the digital internet, real life humans cannot. However, humans or (Net Users as they are called in the human world of the film) do interface with the net a lot, so how do we make their presence known there?

“Avatars,” said Dave Komorowski, who is head of characters and technical information. “We actually call them Netizens.” These square-shaped heads of citizens of the internet were inspired by the square-like shape that app icons on a smartphone are.

For the rest of the design of the netizens like their body shapes, clothes, and facial features, animators in charge of creating the millions of netizens in the film wanted variety and realism like avatars usually are. To do that at scale, animators needed to create new software to create variants. “Like character design in a video game or social media app, we created a system that created random variations of netizens so that each one would be unique,” production designer Cory Loftis.

Altogether, the internet and people you see in “Ralph Breaks The Internet” are not only massive at scale, but very detailed and specific. And that once again done on purpose – to keep you emotionally invested in what you’re seeing.

“We need to be able to create worlds and people that are believable,” said crowds supervisor Moe El-Ali. He continued, “The moment we don’t care about detail even in large things like sets and crowds, we risk you not believable and therefore enjoying our story. So we care!”

“Ralph Breaks The Internet” comes to theaters on November 21, 2018.