Perhaps it’s because I’m a Millennial and dislike most things, but I didn’t enjoy it for a few reason. Chiefly among them, I think that the story was told in a voice that was fit for audiences back then in that it was slowly told and didn’t have that many exciting beats to keep my attention with it.

However, what I did really enjoy is the magic, wonder, and happiness that seems to not be found in films for today’s audiences. I’d argue that most of what young and older people remember about “Mary Poppins” and the character is her ability to be harshly human (in British nanny form) and yet, conjure magic to make it less so.

That magic came in many forms: jumping into a painting and living in its scene, dancing and singing on London’s chimney tops, and the ability to clean a messy room using no limbs.

Some cinephiles call this type of film ‘magical realism’ and its a delicate card to play when creating a movie that needs to be believable and entertaining at the same time. Striking a balance between the harsh realities of a father who loves his job more than his children and stepping in time to dancing penguins is pretty darn tough. But it worked back then.

And it worked for the sequel that has come nearly 60 years later. “Mary Poppins Returns” nearly takes that magic and fuses it with a contemporary story of realism.

The story is set 30 years after the original and has a grown-up Jane and Michael Banks trying to rediscover how the happiness experienced with Mary Poppins can help them in their dire current situation. That situation, without giving anything away, has ties to a lot of the things that audiences encountered in the 1964 film.

Nostalgia does indeed play a part in the story, but shouldn’t affect the enjoyment of the film at all. Instead, filmmakers and director Rob Marshall did a fine job including themes and visual ‘Easter eggs’ from first movie and using them as nuggets of nostalgia that viewers of the original will enjoy, including Dick Van Dyke’s cameo. 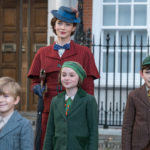 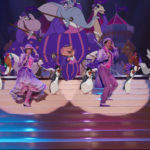 However, nostalgia does have a shortcoming in “Mary Poppins Returns” when it’s used as a plot solution toward the end of the film. You can bet that if you hadn’t seen the first film and didn’t know at least the core of its story and its conclusion, you’ll be wishing for more of a fitting and satisfying ending.

The new story of 2018’s Mary Poppins film is only supported by an extra talented cast and good music. Emily Blunt playing the titular character surprisingly captures the famous nanny’s spirit first exhibited by Julie Andrews while putting her own stamp with her performance. Lin-Manuel Miranda as Jack the Lamplighter is the same ‘ol singing and dancing guy we met in ‘Hamilton,’ but with more childlike wonder in him. The music and lyrics of Marc Shaiman and Scott Wittman won’t be the ear worm songs like the Sherman Brothers’ “Supercalifragilisticexpialidocious,” but they are as fun and heartfelt.

One aspect I particularly loved the nostalgic sequence that is this movie’s jumping-into-the-painting scene. Combining hand-drawn animation and live-action, you are transported into the a piece of art on a ceramic bowl. Just like the scene that inspired it, its a straight 10+ minutes that will make you smile ear-to-ear.

And that smiling will ultimately carry itself past that scene and into most of the sequences in the film. “Mary Poppins Returns” is a feel-good movie in its own way.

The story brings a timely tone to today’s world. Simply put, if you come out of the theater very emotional, it’s probably because prior to entering the theater, you have been bombarded by reminders of how bad the days have been, including in your own life. Then you’re met with over two hours of something hearty, sincere, and happy like this movie. If you hate being happy, this movie is not for you.

So, perhaps you need some happy and magic in your life right now. Enter Mary Poppins again and there you have both.