“There’s a terrific power to music,” Walt Disney once said about his movies. “You can run any of these pictures and they’d be dragging and boring, but the minute you put music behind them, they have life and vitality they don’t get any other way.”

Memorable music has been a staple in nearly every Disney product or experience offering because Walt’s deep connection to music and the power they have to move people as much as his stories.

That love for melody ultimately spilled over into his first theme park in Anaheim, California, where your favorite and memorable Disney tunes are played even before going through the entrance gate turnstiles.

When visiting in the morning, you’re bound to run into the Disneyland Band with their brass instruments and drums welcoming you and hyping you up. From there, it’s you’ll hear a live band that you’ll most likely stay for. Let’s not forget the nighttime parade live acts and even the solo piano performances in the Grand Californian Hotel lobby.

What you’ll probably not notice while listening and watching these performances is the name and logo on all of the instruments.

“You probably will never see it even though it’s there. Unless you’re me.” He is David Jewell, Yamaha Corporation of America’s Partnerships and Alliances Manager. It was a quick 15-minute drive from the Disneyland Resort in Anaheim to Jewell’s office located at Yamaha’s headquarters in Buena Park, California. That proximity is something that Jewell said was part of the reason why their Disney partnership was a ‘natural fit’.

As for how that fit fits together, it’s quite straightforward.

Yamaha Music USA is the official instrument provider of the Disneyland Resort, meaning that the Asian conglomerate’s instrument segment is responsible for providing all the instruments for any and all of Disneyland’s music needs. That includes the marching band’s brass trumpets all the way to using Yamaha-branded sound systems like the ones used in the Hyperion Theatre in Disney California Adventure park.

When the annual NAMM show, a trade show for music merchants, came to the Anaheim Convention Center across the street from the Disney resort in 2013, Yamaha hosted an all-star concert to thank its vendors at the Hyperion with a headlining performance by Elton John, who, as you probably guessed, plays Yamaha pianos. 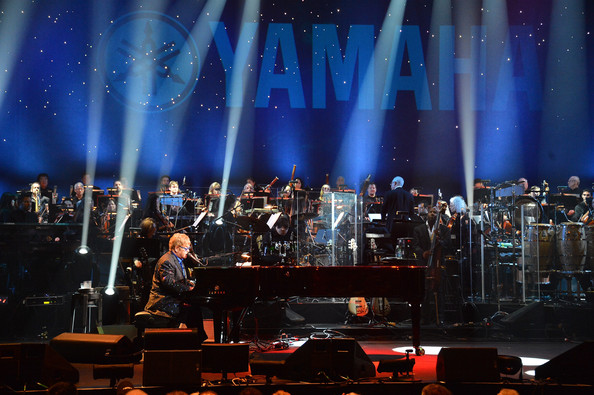 He continued, “Have you been to Club 33 before? The magnificent grand player piano you hear playing in their lounge is ours, too.”

The relationship between Yamaha and Disneyland began in 2005, right as Disneyland park was celebrating its 50th anniversary. “They needed a lot of high-quality instruments for that, and so we happily provided through that first contract,” said Jewell.

Details of the contract in its purest form is that Disneyland would be provided Yamaha instruments and related equipment (plus any maintenance required on them) free of charge in exchange for Yamaha to be the exclusive provider for the resort in all of its music capacities.

That type of brand exposure for any company would probably cost companies millions knowing that millions of people will see their product at one of the most respected and well-known places on Planet Earth.

Every summer, the Disneyland Resort brings together the best university musicians from across the country to be a part of the Disneyland All-American College Band. Once selected after rounds of auditions, they travel to Yamaha headquarters to hand-pick their instrument for the band.

Jewell said, “It’s a moment I’m proud of every time I see them arrive. Their eyes just light up like if they were kids in a candy store. This thing becomes theirs.” 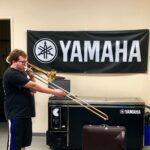 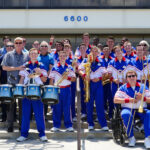 It’s a professional using a Yamaha instrument that Jewell believes to be supremely important. “Through our Disney ties, we get to be in front of people who are leaders in music performance and education,” he said.

The Disneyland Resort has always been that music epicenter for years. Through the Disney Performing Arts Program, students from K-12 schools and universities have been invited to take part in shows and performances at the theme parks. Ask any high school within a 20-mile radius around the resort and chances are that their marching bands have performed down Main Street USA at some point.

Building the community up as a corporate citizen in to the surrounding areas are something that Jewell says Yamaha is fully invested in, too, through some creative and unique ways. “We often take back instruments that have been used by bands and have been in popular shows and parades at Disneyland and sell them,” he says.

Jewell continued, “We then take the money made and donate it to charities and initiatives that support music education.” Some of those who have received financial and resource support from Yamaha include the Boys & Girls Club (who got the money from Yamaha auctioning off the used guitars used in the now shuttered Mad-T Party at Disney California Adventure park) and the Anaheim Elementary School District.

Yamaha also sponsors and upkeeps the high-tech recording studio located backstage near the Team Disney Anaheim building on Disneyland’s property where bands like the All-American College Band learns, rehearses, and records every year.

Like the performers that use their instruments and equipment, it’s that front-and-center visibility at the Disneyland Resort that Yamaha hopes would yield a greater return than money.

“I know our efforts have and will inspire more people, including Disney guests, to play music,” Jewell concluded.

Our special thanks to Yamaha Music USA and David Jewell for contributing to this story!