If you’ve seen any of the trailers for Disney’s ‘live-action’ Lion King, you’d probably be surprised to know that what you’re seeing is NOT a nature documentary on National Geographic (even though Disney owns that too, now).

What you’re actually seeing is 100% digitally created imagery. “With the exception of one shot,” added director Jon Favreau.

It’s true. Everything you’ll see in The Lion King was created with nothing but 1s, 0s, and a very vivid imagination from talented artists and technologists. Similar to what Favreau did with the filmmaking techniques he used to make 2016’s “The Jungle Book,” 2019’s “Lion King” relies on a wholly digital workflow in order to make the movie.

“I learned a lot of things utilizing the tech from ‘Jungle Book’,” Favreau continued at “The Lion King” global press conference in Los Angeles. “I feel like I’ve somewhat mastered those tools with an amazing team, so it was time to take it to the next level.”

That next level included combining a whole lot of traditional and newly invented filmmaking techniques to bring lions and animals to life in a photorealistic way. Firstly, the actors like Donald Glover and Beyonce were brought in to record their voices for their roles. Similar to the animated film process, cameras recorded the actors’ faces to capture their emotions and expressions as they delivered their lines.

It was with that footage that animators were brought in to design, draw, and animate the animals like a lion for Mufasa and a baboon for Rafiki. Since they knew that putting human facial features on animals’ bodies would look strange, Favreau said he had the animators imagine the “translated version of facial expressions and moods would be for specific animals.” 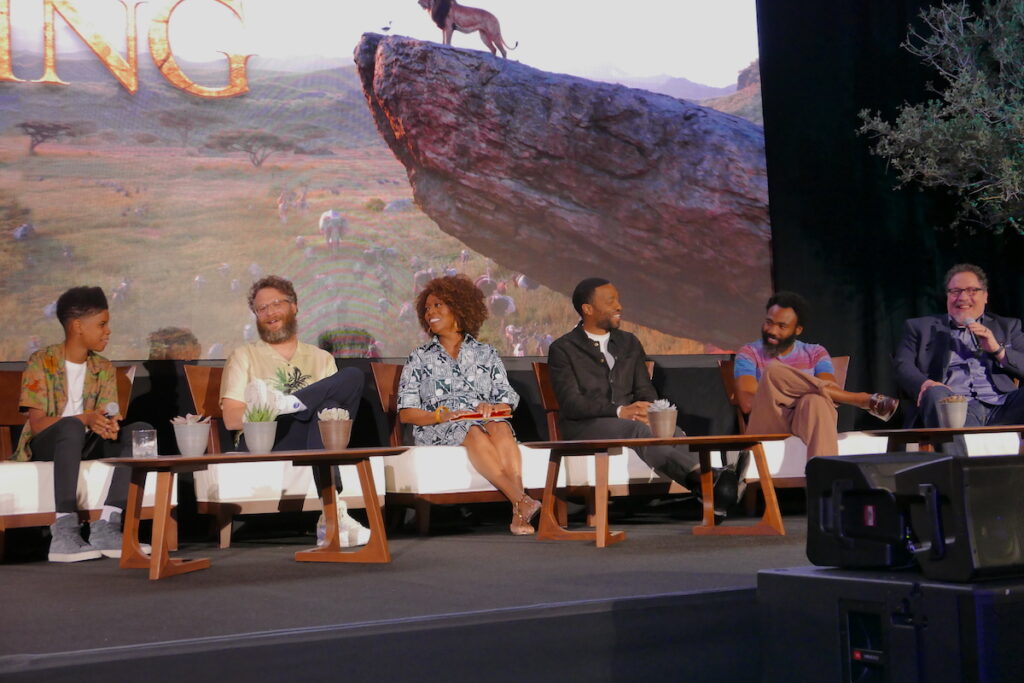 Once that part of the film was set, it was time to create the place where all the action and camera work was to take place. In order to create the African savanna setting, animators once again had to take inspiration from real things like nature documentaries. “The attention to detail was needed to keep the illusion up. We wanted this to look like a documentary with real-life animals in real-life places,” Favreau said.

Once the animals and sets were completed, Favreau enlisted some traditional film talent to complete the look and feel of the movie. “I’ve always wanted to work with Caleb Deschanel (“The Passion of the Christ”, “The Patriot”) as I’m a big fan of his cinematography work, but he’s a traditional filmmaker. How could we translate what advanced things we were doing for him and others on the team?”

The short answer was indeed to ‘translate’. In this case, translating meant creating a “virtual reality game.” As Favreau described it, he had all the ‘traditional filmmakers’ like Deschanel climb into VR gear to enter a set as if it were real. Then Deschanel was given a virtual camera to design and capture specific shots that he saw fit for each scene. Favreau said watching the final cinema work “looked easy,” but was far from it to get it all done in three years.

Putting it altogether, the process of creating arguably one of the most technologically complex films of all time in just three years is a feat. And Favreau knows that.

He continued, “We’ve only just begun to create new worlds in movies through this process. I can’t wait for what’s next.”

Read our full, spoiler-free review of “The Lion King” (2019) by clicking HERE.