Editor’s note: Disney on Broadway in Concert celebrated 25 years of Disney Broadway magic at this year’s D23 Expo. From Beauty and the Beast to Frozen, six Disney stars took the stage to lead the audience through a timeline of the best and brightest Broadway performances.

Brett Nachman writes on the experience, sharing what it was like to witness this blend of fan-favorite tunes at the Expo this year.

Twenty-five years have passed since Beauty and the Beast first graced the stage on the Great White Way. To commemorate the occasion, which similarly marks the 25th anniversary of Disney on Broadway, Hall D23 at the D23 Expo held a show-stopping concert to 7,000 attendees. Hosted by Gavin Lee and featuring the likes of Josh Strickland, Heidi Blickenstaff, Ashley Brown, Kissy Simmons, and Alton Fitzgerald White, the sensational stars put on a Broadway extravaganza.

Beauty and the Beast

Beginning with a rousing rendition of “Be Our Guest” led by Lee, the cheerful concert highlighted more than two-dozen songs from Disney on Broadway’s catalogue. The production followed a chronological order to illustrate the evolution of productions and the stars who came to shine in them. Blickenstaff and Strickland showcased the ever moving “Beauty and the Beast,” followed by Broadway’s 15th Belle (Brown), who fellow Mary Poppins co-star Lee said had the “voice of an angel” after she sand “A Change in Me.” These stars have long sung on stage together – whether on Broadway or other locations – and have an electric chemistry when singing.

Kissy Simmons and Alton Fitzgerald White then led the stage in a celebration of The Lion King. White has played the role of Mufasa in The Lion King for an amazing 4,308 performance, while co-star Kissy Simmons portrayed Adult Nala for nine years across many venues. On stage, Simmons sung the evocative “Shadowland”, and White belted out “He Lives in You”. White and Strickland led the crowd favorite “Hakuna Matata”, and Strickland and Brown complemented the spirited section with their rendition of  “Can You Feel the Love Tonight”.

Aida debuted a few years after The Lion King, and at D23 this opera-turned-musical was highlighted via a couple of songs: Strickland singing the crowd-pleasing “My Strongest Suit” – unleashing his inner “diva” with great flair – and Simmons putting her take on the epic “Easy as Life.” Strickland continued to take the stage by storm with his pieces from Tarzan: “Strangers Like Me” and “You’ll Be in My Heart,” paired with Blickenstaff.

One of the longer sections of the event was a compilation of Mary Poppins tunes, with Lee receiving among the greatest applause (and a standing ovation) for his tap dancing routine set to “Step in Time.”  Then we took a brief jump in time to the present with a couple of Hercules tunes, including the gospel-themed “A Star Is Born” in honor of the forthcoming public performance in Central Park.

Little Mermaid encompassed the next section, with Blickenstaff recalling her roles in the show, including Ursula and a maid of Prince Eric’s that ended up being written out. Blickenstaff sang the grand “Poor Unfortunate Souls,” followed by Lee’s witty Scuttle song (“Positoovity”) and White having a ball with “Under the Sea.” 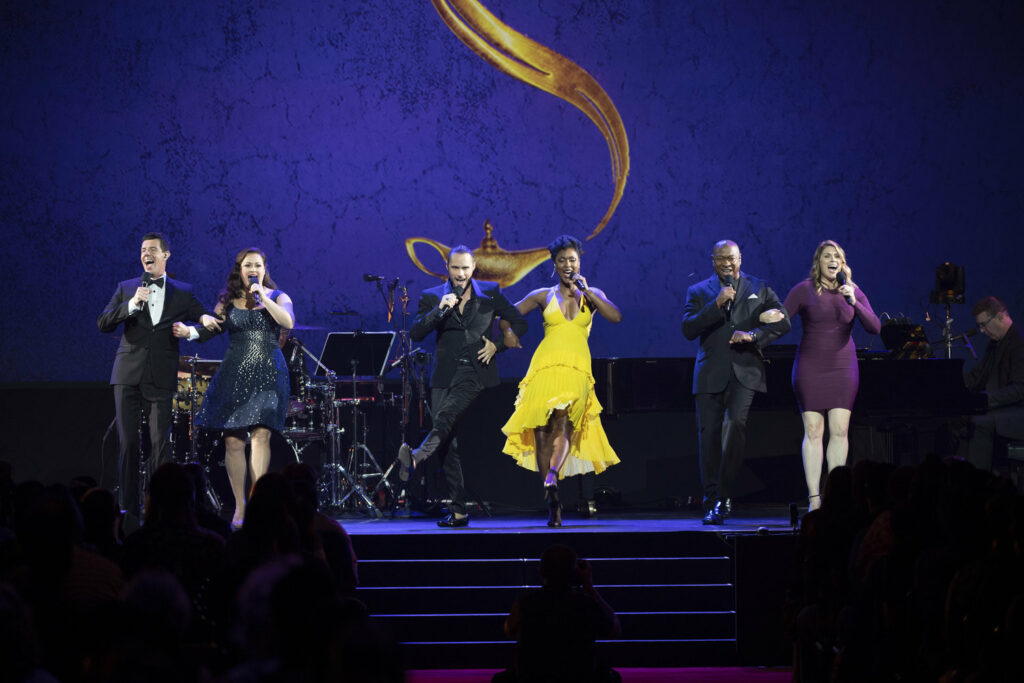 Newsies came next, with the entire group chanting “Carrying the Banner,” the ladies singing “Watch What Happens,” and Strickland singing “Santa Fe.” From there we headed to Agrabah via Simmons and White offering a rendition of “A Whole New World.” The entire cast then enjoyed themselves with “Somebody’s Got Your Back.” Blickenstaff’s raucous role in the stage interpretation of Freaky Friday was translated to the stage via “No More Fear.” Finally, things took a chilly side as we visited Disney’s newest Broadway spectacle: Frozen. Although the stars had to “Let it Go” by bidding Hall D23 adieu, over the course of the performance they not only enchanted longtime fans, but also won over attendees who have yet to head to see a Disney Broadway show.

A few other interesting notes and interpretations of the show deserve some attention. First, a sign outside Hall D23 indicated that the concert was being filmed – I have a funny feeling it may be bound for release on Disney+. What a treat it would be to see this concert again and again on Disney’s forthcoming game-changer service. Second, it was surprising, if not disappointing, that The Hunchback of Notre Dame was excluded from the showcase, despite it being played outside of Broadway, though Freaky Friday also never received a run in New York. Third, the show featured some extremely talented musicians who accompanied the performers, making it feel almost as grand as seeing a live Broadway show.

During an already incredible weekend of live programming at the D23 Expo, the Disney on Broadway concert made its mark as a must-see and most moving experience that reminded me of how significantly these songbooks, and these performers, have touched our lives.

Brett Nachman has long written for entertainment websites over the years, including Geeks of Doom. Recently Brett created and hosts the Notably Disney podcast, which highlights Disney music and books through interviews, reviews and in-depth discussions. Follow Brett on Twitter or email him at notablydisney@gmail.com.