Our guest contributor Angela Liu takes us to the premiere and gives us an exclusive peek behind each short shown at the Expo.

It’s safe to say that the highly-anticipated streaming bundle, Disney+, was one of the main centerpieces at D23 Expo 2019. Armed with new shows from the Marvel Universe, an original Star Wars series The Mandalorian, a Lizzie McGuire reboot, and exclusive feature-length films like the Lady and the Tramp live-action remake, Disney+ will host an expansive variety of options for everyone.

That said, Disney+ will also be home to a collection of short films created through Short Circuit, an experimental program for animators and filmmakers at Walt Disney Animation Studios (WDAS) to pitch fresh ideas for the chance to be backed by the studio and their fellow artists and turn their stories into short films. Launched in 2016, Short Circuit aims to showcase the talent of Disney artists, push new frontiers in technological innovation, and challenge the limits of visual storytelling.

Longtime Disney animator Darrin Butters (Big Hero 6, Tangled, Moana) kicked off the experimental program’s panel with a heartfelt dedication to the brilliant filmmakers behind six short films that were handpicked to debut at the world premiere of Short Circuit.

The first short film, “Exchange Student,” directed by Disney Storyboard Artist Natalie Nourigat (Ralph Breaks the Internet), is a fish-out-of-water tale following a human girl who transferred to an all-alien school. Accomplished by a whimsical watercolor texture and delicate linework around the characters, “Exchange Student” parallels the tribulations that Nourigat once faced herself at a summer camp for French-speaking students when she spoke only English. With a language barrier in place, Nourigat spent those arduous weeks in silence, wondering if “that was how it was every day for [first generation immigrants],” and pledging to reach out more to other children in the future through her art.

“Elephant in the Room” by Brian Scott

Next, Disney animator Brian Scott (Frozen) took the screen for his short film, “Elephant in the Room”, a story about a young boy and a baby elephant separated from his herd to work on a banana plantation run by the boy’s father. As the bond between the boy and the elephant deepens, the mournful cries of the baby elephant’s family grow louder until the boy decides to make a heart-tugging decision. This piece reprises the aesthetic used in the short film “Feast” in which Scott served as the Head of Animation. Scott also expressed that he was fortunate enough to have a song composed exclusively for his short. As a result, “Elephant in the Room” truly hit home in reminding us that we all possess the “power…to make a positive impact on our lives” (Brian Scott).

Zach Parrish, Head of Animation for Big Hero 6 and animator for Tangled and Moana, directed the short film, “Puddles”. Utilizing a 3D style and a generous use of mirror effects, “Puddles” shows us that magical realms can be discovered just a hop and a splash away in real life, rather than in virtual worlds behind cellphone screens. As expected with nearly any Disney feature, this short is stuffed with Easter eggs, including a Maui whale and other fish from Moana. Parrish cheekily teased that there are a few more to be found if you subscribe to Disney+ to take a closer look.

“Lightning in a Bottle” by Virgilio John Acquino

Following Parrish’s piece was Virgilio John Acquino’s “Lightning in a Bottle”, a short about a little boy who traps lightning in a glass jar for an upcoming science fair. He quickly discovers that his tiny captive is much more than a prize-winning science project and is faced with a moral dilemma. Disney modeler artist John Acquino (Frozen 2), spoke about how his early years in the Philippines were touched by the wonders of Disney’s animated features, particularly Sleeping Beauty, and mused on his pursuit to recreate that magic himself. He then shared his studies on clouds and electricity before they were fleshed out on screen and personified with relatable, human traits.

In a stunning blend of sight, sound, and stars, “Zenith” is a dazzling homage to Walt Disney’s Fantasia. Look Development Artist Jennifer Stratton cited the 1940 masterpiece, as well as her own passion for science and music, as her inspiration for this own short film that follows an iridescent stag that weaves through the galaxy and its astrological inhabitants. Darkness strikes (as it does in every Disney feature) in the form of a sinister Black Hole, which the stag challenges in a cosmic battle that will be remembered for eons to come. Stratton spared no detail as she took us behind-the-scenes for “Zenith”, sharing that each nebula used its own unique technique, revealing that the Black Hole “channels Fantasia’s Chernabog and even confessing that she “cheated” with the stag by recycling the animation used for Sven from Frozen.

“Just a Thought” by Brian Menz

Finally, Disney animator Brian F. Menz drew inspiration from his love for comic strips to direct his short film “Just a Thought”, a classic boy-meets-girl story where everyone around the awkward pre-teen, including the girl of his dreams, can see everything inside his thought-bubbles. Meticulously applying the same techniques used by newspaper printing, Menz successfully captures the style of the vintage Sunday funnies that we know and love. In the end, the Big Hero 6 animator divulged that the thought-bubbles of the infatuated adolescent were actually his own when he met his wife, including his daydream of having seven children and a puppy with her.

The world premiere of Short Circuit effectively reinvigorated the promise that the limits of visual storytelling are nowhere near being touched so long as artists and filmmakers continue to be bold and take risks in their craft. “This is our playground,” Darrin Butters said succinctly, “This is the bread and butter of how we start stuff in the studios.” 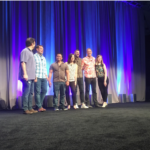