Anika Noni Rose prior to "The Princess and the Frog" presented by the Academy of Motion Picture Arts and Sciences as part of the Marc Davis Celebration of Animation, on Thursday, September 5, 2019.

Editor’s Note: This year, beloved Disney movie The Princess and The Frog is celebrating its tenth birthday. To commemorate this milestone, the Academy of Motion Picture Arts & Sciences held a special panel with the movie’s biggest stars to share memories, stories, and reflections on how the movie continues to be important today. David Yeh, guest writer, attended the event and shares the best fun facts he heard at the event.

It almost feels like yesterday that The Princess and The Frog came onto the scene on December 11, 2009. That the film still feels as fresh and poignant today as it did ten years ago is a testament to the filmmakers, directors Ron Clements and John Musker, and their cast & crew.

While older generations certainly remember the animation renaissance of the 90’s, The Princess and The Frog was Disney’s first musical, first princess movie, and first hand-drawn animated film in five years. Today, we’re quite acclimated to Disney musicals once again with Tangled, two Frozen films and Moana, and it was The Princess and The Frog that kickstarted it all.

The Academy of Motion Picture Arts & Sciences recently celebrated the 10thanniversary of The Princess and The Frog as part of the Marc Davis Celebration of Animation, and what a celebration it was. It kicked off with a live performance of “Down in New Orleans” sung by Anika Noni Rose (Tiana) backed by Kenny Sara & the Sounds of New Orleans. The panel was hosted by Quevenzhane Wallis (Beasts of the Southern Wild) and included panelists: Anika Noni Rose, Keith David (Dr. Facilier), Jennifer Lewis (Mama Odie), Michael-Leon Wooley (Louis), Randy Newman (Composer), Ron Clements (Co-Director), Peter Del Vecho (Producer), Rob Edwards (Screenwriter), Marlon West (head of effects), and Bruce W. Smith (Animator of Dr. Facilier).

What we saw was the passion of the product that still resonates today. It was by far one of the most enjoyable animation panels I’ve experienced in some time. Here are a few fun things we learned about The Princess and The Frog. 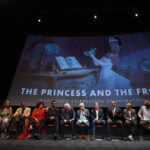 Tiana had a deleted song called “Queen of New Orleans”

Randy Newman described it as “shi**y,” but he could simply be a little sore that it was cut, because Anika Noni-Rose described the song as “FIRE.”

Anika ditched the Dreamgirls premiere party to audition for Tiana

“My first audition was the night that Dreamgirls premiered in Los Angeles,” remembers Noni-Rose. “I left the premiere. I did not do one bop. I did not go to a party. I did not drink a drink. I went back to my hotel and I made my sister-in-law work with me on my lines for the audition the next day. Never once did I feel I was not where I was supposed to be. Never once did I feel like this girl was not me. I felt that I knew her from the moment I read the slides.” 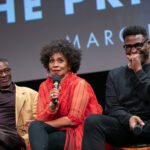 Keith David (left), Jenifer Lewis (center) and Michael-Leon Wooley prior to “The Princess and the Frog” presented by the Academy of Motion Picture Arts and Sciences as part of the Marc Davis Celebration of Animation, on Thursday, September 5, 2019.

Keith David has an amazing voice and gave an incredible performance as Dr. Facilier. His inspiration? Geoffrey Holder, a talented actor, dancer, choreographer, singer, director, and painter. Keith recited an old 7Up commercial that Holder did with a near perfect impression. Keith would later also mention Snidely Whiplash who was his favorite villain growing up.

“We had Keith in mind for Dr. Facilier right from the start,” said Clements. “It just seemed like a perfect fit. But we had no idea if he could sing. And he came in and – whoa can he sing! We were blown away.”

“Well, my mother used to listen to all of Moms Mabley albums,” remembers Lewis. “As a little girl, I would sit there and listen and of course her famous joke was ‘The only thang old man can do for me, is introduce me to a young one.’ And of course I fell in love with her. So of course, I pulled out Moms Mabley. All you gotta do is take your teeth out. My favorite part was being in the studio with Randy [Newman]. I wanted to please him so much.”

Quvenzhané Wallis (left), Anika Noni Rose (left center), Keith David (right center) and Jenifer Lewis prior to “The Princess and the Frog” presented by the Academy of Motion Picture Arts and Sciences as part of the Marc Davis Celebration of Animation, on Thursday, September 5, 2019.

“As soon as they started telling me about it, I thought, ‘oh my God, it’s going to be a classic,'” said Edwards. “So many of my friends have waited so long to see this kind of movie. And also we were bringing back the tradition of the musical. Part of the conception was that it was going to be in America, a musical, African American protagonist, and what’s the most magical city in the United States? You get New Orleans. You get bad voodoo and good voodoo, all the great cultures, all that stuff.”

In terms of animation, Marlon West went from hand-drawn, to CG, back to hand drawn, and now back to CG 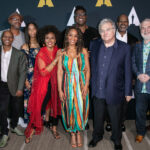 “Usually the cast passes on the wrap party for the premiere,” said West. “But everybody was there, because that’s how much The Princess and The Frog meant to them.”

Hand-drawn animation has left a mark on computer animation

“The legacy remains at the studio even though we’re doing CG films,” said producer Peter Del Vecho. “We’re doing Frozen 2 right now and Mark Henn is still doing drawings, so the influence of hand-drawn animation remains. A lot of animators still sketch out the things that eventually turn into CG.”

Anika wants to see more of the movie in Disney parks

“We could always use more Princess and the Frog!” Noni-Rose exclaimed. “I think I heard down the grapevine that they are finally opening a restaurant – that is very exciting to me.”

“She told young women that life is something achievable without first finding a man, and that is a gift,” said Noni-Rose. “Life is different now. Society is different now. People grow up and have families and have jobs and do things in very different ways. And I think it’s a very supportive film. You’re almost there, and you contain everything you need within yourself to make your dream what you want to make, but also not to forget to love. There are so many beautiful messages. Don’t be a stick in the mud!”