During a talk about the latest edition of “How Does the Show Go On: An Introduction to the Theater,” Thomas Schumacher told the story of a teenager who came with him to a broadway show as part of the Theatre Development Fund’s Open Door program.

“It was first broadway show most of them had ever seen,” he remembered.

One kid is 17 years old, a senior in high school…and he’s just gobsmacked. I turned to him during intermission and said to him, “how are you doing?”

And he says “I can’t believe it. It’s like watching a movie in 3D.” 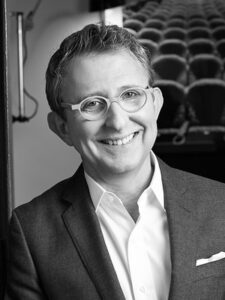 Thomas Schumacher, President & Producer of Disney Theatrical Productions, has always made an effort to encourage and engage with younger generations through the arts. His book “How Does the Show Go On: An Introduction to the Theater” has been a beloved introduction to theater for many years, and now the “Frozen Edition” is giving readers even more access. The book explains every aspect of production through photos, charts, and behind-the-scenes trivia. With stunning visuals and easy-to-understand language, this book is great for both theater enthusiasts and children alike.

New Disney shows and updated technology made the decision to create a new version easy for Schumacher. With the help of Jeff Kurtti, who helped author the previous editions, Schumacher was able to integrate a number of special features into the third edition:

This edition will be the first to ever integrate AR technology. Readers can use a free app to scan codes within the book that will show clips, interviews, and special videos that bring the theater to life.

Alternate reality also allows for updates. As more shows are created, more technology is developed, and theater continuously changes, the book will give readers all the latest and greatest in the field.

The recent release of Frozen on Broadway made it obvious that theater now had brand-new technology not covered in older editions of the book. The latest version is updated with facts and figures covering the latest in theater production magic, from set design, to costuming, to lighting, and more.

Whether in a classroom or at home, this book was created to encourage an interest in theater. Fun facts, well-loved Disney characters, and a special section about putting on your very own show make this accessible and enjoyable for readers of all ages.

You can now order the latest latest version of “How Does the Show Go On: An Introduction to the Theater.” Get copies today for yourself, for fellow theater lovers, and for children interested in the arts!