Not that many people know about Bowers Museum outside of Southern California. It’s technically considered a regional museum, typically serving its surrounding community with original art displays and occasional traveling exhibitions that brought artifacts like the famed Terracotta Warriors from China.

And while world-famous Terracotta Warriors would certainly shine a new spotlight for this regional museum, there’s a certain mouse that will bring the international spotlight once again.

It actually was a version of a traveling exhibit that debuted at a D23 Expo in Japan a few years ago. “It was so popular with everyone that the Japanese organizers asked that we bring it around the country,” said the director of the Walt Disney Archives Rebecca Cline said at the press preview. “So we did and it still remained a hit!”

Cline said that’s when the thought of bringing it to the United States grew. It just so happened that Bowers came calling back in 2017 with the same thought.

“We knew we wanted a Disney exhibit from the get-go,” said Victoria Gerard, Bowers’ VP of programs and collections. “It was serendipity at its best.”

Once there was a vested interest from both sides, both Bowers and Disney began the work at creating a new experience for Disney fans and museum enthusiasts, too.

For Disney, the entire 30-person Archives team came together at the beginning of 2017 to dream up a new experience using inspiration from their successful Japan show.

Bowers’ handful of experts began to work on housing the exhibition which would ultimately include 465 assets. Gerard went on to say that the space would be custom-made with new walls and lighting installed to guide people through the experience.

The experience itself is a historical and story-driven journey that gives visitors a glimpse inside what’s inside the actual Archives, as well as what it’s like to be a Disney Archivist.

Gerard said, “Both preserving history and educating the public about how it’s all done encompass our mission. Disney values these things, too, so we’re glad that this exhibit exists and fits well.”

The experience itself is pretty large and can easily take an hour or more to fully go through. Around every corner, you’ll find assets that are directly from one of the six large storage spaces that house all the assets at the Disney Archives in the Burbank, California area. Some of the items you’ll find date way back to 1920 to a megaphone that Walt Disney used to create his first animated shorts, called “Laugh-O-Grams,” all the way to the sword used by actress Liu Yifei who plays Mulan in the live-action remake set to debut at the end of March 2020. 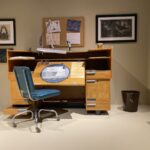 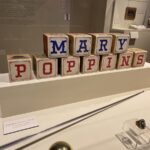 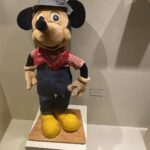 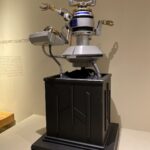 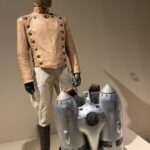 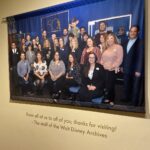 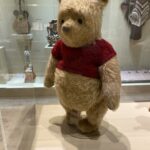 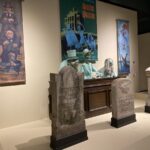 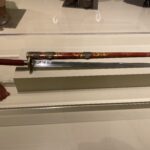 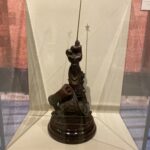 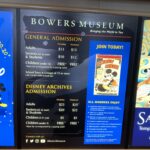 Scattered in between those time frames are assets that don’t only span time, but Disney’s business units as well. You’ll find RX-24 aka “Rex” from the original flight of Star Tours at Disneyland. Just around the bend, you’ll also see the costume and jetpack worn by Bill Campbell who played Cliff Secord in the cult Disney classic film “The Rocketeer.” And if you look even more carefully, you’ll see one of the oldest Mickey Mouse watches ever made, too.

But don’t think that because there’s so much of an entertainment company in what can be considered an unbiased educational space that all this is just an advertisement for Disney. After all, it’s not surprising to note that Bowers is located just about 15 minutes south down the I-5 freeway from the Disneyland Resort in Anaheim.

“This isn’t just a commercial show though,” Gerard responded. “Everything from the fun facts painted on the walls to the digital guide we created for the experience, it’s very clear that we want people to learn less about a company and more about how created things have shaped our world, culture, and society today. That’s important research that only a museum can give,” she said.

In addition to the exhibition, both the Bowers and the Disney Archives team also worked to create extra programs for visitors. Archives director Becky Cline said at the press preview that there will be over 40 programs that would “compliment the entire experience,” ranging from book signings with Disney veterans like Don Hahn (producer, “The Lion King,” “Beauty and the Beast”) to even a dinner presented by historian Marcy Carriker Smothers where Bowers chefs will serve upscaled versions of some of Walt Disney’s favorite dishes like chili and clam chowder.

In all, the entire Inside the Walt Disney Archives exhibition is very much opening the door to the famed and somewhat secretive place where much of Disney’s history is stored and preserved. However, thanks to the partnership between the company and Bowers Museum, it has become a more holistic experience giving anyone who might be curious enough to learn more about Disney the “happy” opportunity to do so.

“You don’t have to be a mega Disney fan to enjoy it all,” said Bowers’ VP of collections Victoria Gerard. “We trust that if you do visit, though, you’d have a magical and memorable experience. Just like at Disneyland.”

Our special thanks to Victoria Gerard, Bowers Museum, and the Walt Disney Archives for contributing to this story!