You’re probably like me right now – staying at home trying to “flatten the curve,” keep your social distance, and washing your hands to slow the spread of COVID-19 aka the Coronavirus.

That being the case, you also have found that there’s a lot more time now to do things! And if you’re a Disney fan, there’s a unique opportunity to still enjoy the magic from where you are. Yes, Disney Parks and Disney Stores are closed, but there’s so much Disney to be had if you look.

Below, you’ll find a list of official Disney things you can do simply with just an internet connection! Hopefully there’s something here that might give rest and happiness to your worried minds and hearts right now. We’ll update this list if find any more things, too.

Be well, friends, and remember to spread the magic!

Pixar In A Box

Have you ever wanted to become a Pixar artist? Then look no further than the free e-learning course created in collaboration with Pixar Animation Studios and Khan Academy. Each online class is a crash-course of what Pixar’s artists do and how they do it. Did you know that in addition to animation, different disciplines like software engineering and historians also have a hand in creating their award-winning films!

Imagineering In A Box

A few years after Khan Academy debuted Pixar In A Box, a new partnership formed with Walt Disney Imagineering. Today, we have Imagineering In A Box. Similar to the Pixar offering, Imagineering In A Box gives anyone interested in becoming an Imagineer an opportunity to learn to do so. While its a nice overview (since Khan Academy classes were geared toward kids and teens), the classes go in-depth on what Imagineers’ design and artistic sensibilities by showing some amazing behind-the-scenes video of existing and upcoming projects.

Disney’s streaming service couldn’t have come at a more convenient time. And while Disney+ offers many Disney and Disney-brand movies, TV shows, and original series (that I assume will be added to even more with the outbreak and more eyes online), let’s not forget the additional streaming services they’ve bundled together also. All of Hulu’s multi-network shows and other studio movies and ESPN+ with its robust sports programming are also available to view. View more about the bundle HERE.

Late last year while then Disney CEO Bob Iger was on his new business book publicity tour, he also was working on another project with the celebrity e-learning company MasterClass. The classes, accessible via paid subscription, include other notable people like Gordon Ramsay teaching cooking and even Anna Wintour teaching creativity and inspiration. Now executive chairman Iger has debuted a class where he teaches leadership and strategy through his experiences leading a creative business like Disney. It’s certainly an entertaining and informative class that both Disney fan and curious learner would enjoy.

Because pop culture doesn’t stop with Coronavirus! Disney’s online entity brings together its stories, characters, and worlds into a BuzzFeed-esque site into Oh My Disney. Founded in 2012, you can find gifs, quizzes, lists, and videos that tell you what Disney character you are based on your personality and behind-the-scenes videos with celebrities from its movies doing fun and random things to keep you giggling and happy. 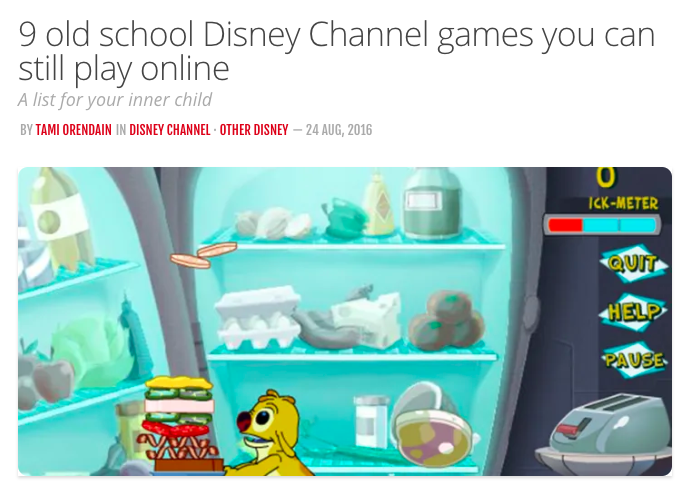 Remember in the early 2000s when Disney Channel created online games based on its shows and movies? Well, our own Tami put together a list of those games that are still available to play right now like Stitch Tiki Bowl and Zack and Cody’s Tipton Trouble. Check out that list and where to play those games HERE.

While everything is currently closed, online stores remain open, and that includes shopDisney aka the Disney Store online. If your children need some Disney-branded board games for a fun family time, Disney Princess dolls to play make-believe with, or Mike Wazowski PJs just because, shopDisney has it all. And because all shipping services are currently not closing, you can expect to have your purchases to arrive right at your door within a few days.