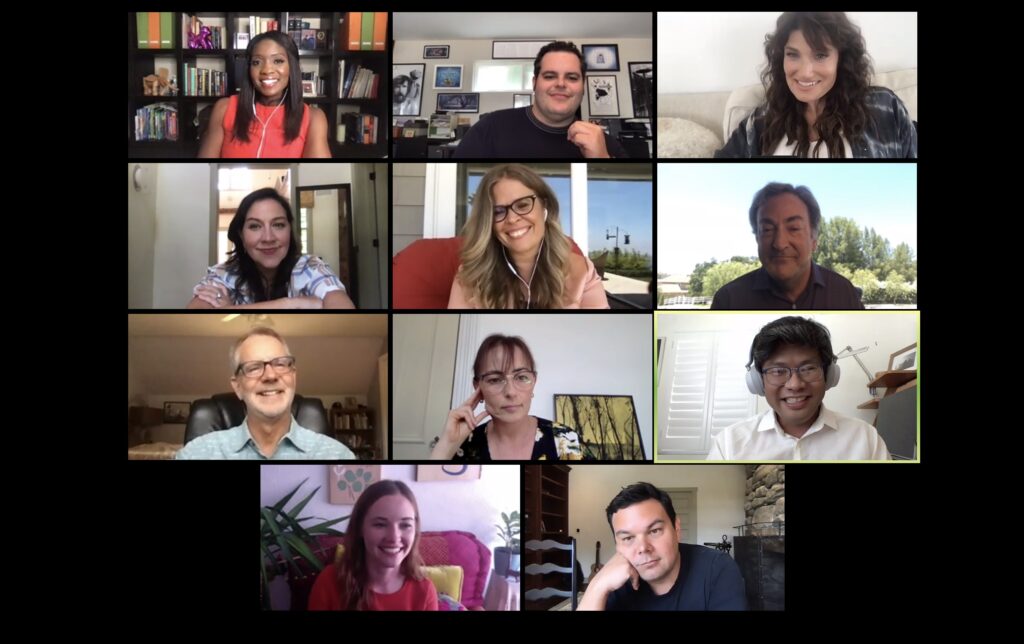 The “Frozen 2” cast and creatives on Zoom call.

There was never a question of whether or not Disney wanted to make “Frozen 2.” However, there was a question on what it would be about. For the writer/director team of Jennifer Lee (now also chief creative officer of Disney Animation) and Chris Buck, many questions came up from “Frozen” fans like ‘why does Elsa have powers?’ and ‘what really did happen to Anna & Elsa’s parents?’

It was with those questions and the support of the original creative team, including the voice cast, that the sequel film began to take shape. And thanks to an enterprising ABC News documentary film team, we now get to see exactly how it was made.

“Into the Unknown: The Making of ‘Frozen 2′” is an unabashed behind-the-scenes look at the highly-anticipated animated film. It very much is a true look at what goes into making a Disney animated feature with uncut footage of the team’s creative process.

Megan Harding, the director of the documentary, said that she and her team began the process of making this docuseries after realizing how many great stories came from the behind-the-scenes documentary they made for an ABC TV special on the original “Frozen” back in 2014. “There was something special about the first we know would carry onto the second,” she said during a virtual press conference. “That ‘something’ is what we wanted to share with the world.” 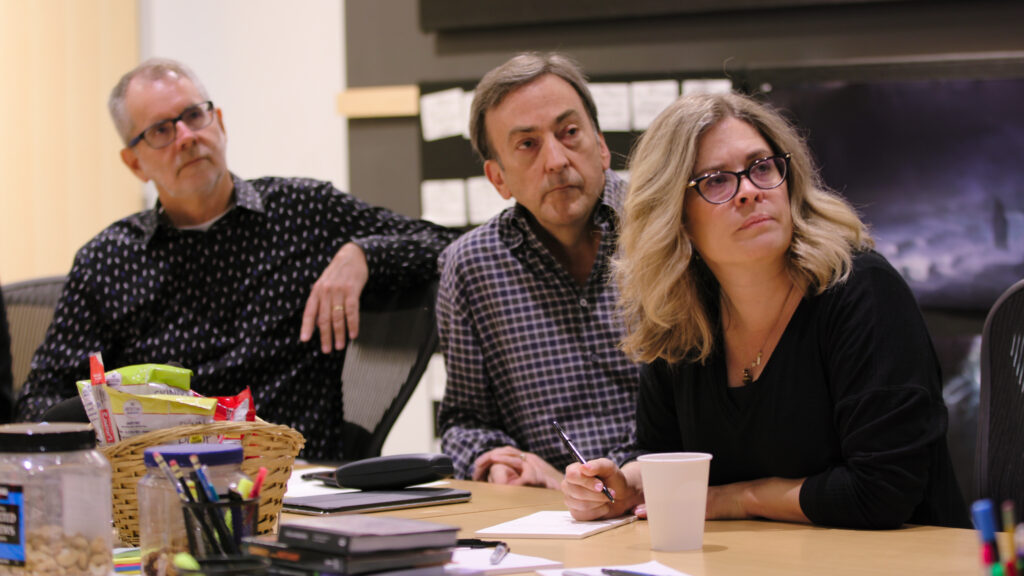 Once “Frozen 2” was greenlit, Harding and the documentary team was given unparalleled access to film each aspect of the production, from the story rooms where the writers put the narrative together, the animators doing their very technical work to give the story its believability, the voice talent who brought the citizens of Arendelle to life, and even my personal favorite – seeing the orchestra record “Into The Unknown” with Idina Menzel.

Altogether, hundreds of hours of behind-the-scenes footage was shot across 115 days in an effort to make “a truthful documentary,” according to Harding.

Over a period of six 30-minute episodes, “Into the Unknown: The Making of ‘Frozen 2′” very much is a truthful look at how these multi-million-dollar, Oscar-winning animated features are made; and although you need that money to pay the bills, many on the “Frozen 2” team would argue that special ‘something’ that makes it all come together is what I call ‘collaborative vulnerability’. More on that later.

Even just having documentary cameras follow their every move during production often required an intentional lowering of people’s guard. “It was cool to have them around, but you couldn’t editorialize what they see and didn’t see often,” said co-director Chris Buck. Added producer Peter Del Vecho, “It was added pressure to not perform, but to just create as usual.”

As for what you see in the finished docuseries, it did require some creative editing to find a narrative and to piece it all together. That through-line came in the form of treating the creative team as actors and actresses themselves. The doc zeroes in on the stories of songwriting duo Bobby Lopez and Kristen Anderson-Lopez and how they wrote Elsa’s song “Show Yourself” which was on the verge of being cut since it wasn’t fitting the overall story well.

The doc also focuses on Malerie Walters who animated Elsa alongside her leader Wayne Unten who was the supervising animator for Elsa in the first film and how the closeness of a character very much dictates the emotion and connection you have with that character on-screen.

“All this requires a team that not only understands the story and loves the characters, but believes that all this is an expression of self,” said Unten during the virtual press conference. “That in its purest form is being vulnerable to share who you are – just like Elsa,” added Walters, who very much shows her very funny process in the docuseries. Trust me.

That adherence to showing the creative process for what it is resonated with every member of the team, including the voice cast. 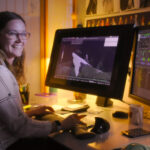 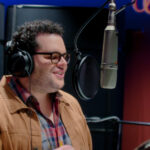 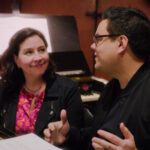 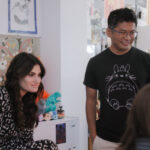 “Part of the making of anything means that you have to commit to having it critiqued and molded into shape for years. Can you imagine having your work painfully criticized and molded over years? I can – I’m an actor!,” said Josh Gad laughingly, the voice of Olaf during the virtual press conference.

Idina Menzel, the voice of Elsa, added to Gad’s comment by sharing her own struggles with self-confidence and being vulnerable. “There’s no way to through the process than by leaning into some of the things about yourself that might make you feel uncomfortable. You, yourself, need to go ‘into the unknown’.”

Overall, it seems as if the entire team made the conscious decision to go ‘into the unknown’ and move into sharing their truthful, sometimes broken, and yet creative selves. In other words, they did it as a team.

“I work in a building that says ‘ANIMATION’ on the side of it, but I often think about how many of us relied on each other,” said Unten. “But I think it really should say ‘COLLABORATION’ because there’s so many of us who need each other to be true to make something true.”

There are over 300 people that had a hand in creating “Frozen 2” that co-director Jennifer Lee also wanted to credit. In addition to the artists, Lee said there are “tech artists” that make up the world-class technology team that has custom designed software to create the things on-screen that have never been done before. And even those software designers needed to lean into their own creative vulnerabilities to invent something for a shot or scene.

Arguably, that special ‘something’ that Disney seems to get right every time is getting together a passionate team of people who in working together to break each other down and bring each other back up to create something magical.

Kristen Anderson-Lopez said, “That’s the beauty of the make-up of this time. We can and have had difficult conversations over the years of making together, but then we can talk about what happened after. Yes, we can share passionately, but we can also trust that we’ll listen with heart, too. It’s what makes the difference between bring your best self to the work place and bringing your whole self to it.”

Added Menzel, “Being vulnerable together is what made this all happen. It’s terrifying to bring ideas and have all these people in the room criticize you, but everyone here has a big heart for you beyond the work since we all want to work to keep progressing the magic of Elsa, Anna, and everyone who believes in the power of this story.”

Our thanks to the cast and creative team of “Frozen 2” for contributing to this story! “Into the Unknown: The Making of Frozen 2” is now streaming exclusively on Disney+. 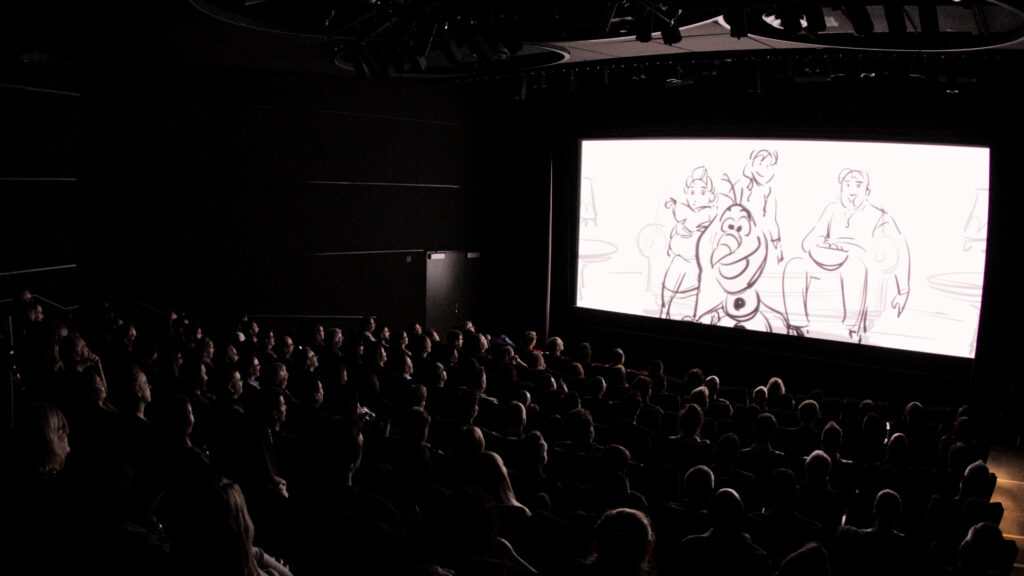