This July 4th will be different, and not just because of the ongoing Coronavirus pandemic cancelling all our party plans. It will be because one of America’s favorite staged musicals will be available for viewing on Disney+.

In somewhat of a surprise announcement, Disney executive chairman Bob Iger and Lin-Manuel Miranda announced that the filmed version of “Hamilton” would be exclusively available to watch on the streaming service on July 3, one day before America’s 244th birthday. Disney had previously announced back in February of this year that they would release the filmed version in theaters in 2021, but current events prompted Disney and Miranda to “not throw away their shot” in speaking into the moment.

“In these times of people uniting against forces of adversity, I think it’s quite relevant and quite important,” said Iger during an interview with the announcement on Good Morning America. “It’s a thrilling experience watching it all on film,” added Miranda. “You essentially get the best seat in the house – right in your living room.”

Miranda alludes to how the musical was captured. Over the course of three days in June 2016, the original cast of the hit Broadway musical was filmed performing. Utilizing stabilized cameras capturing different angles of the stage and close-up shots of the actors, it very much presents as if it were a true cinematic experience. It’s similar to the filming techniques that were used to capture “Newsies” a few years ago.

If you have never seen a staged musical before, a lot of the experience depends on where you’re seated. And especially with popular musicals like “Hamilton,” tickets for the the best seats usually near the stage in the center section can cost hundreds of dollars. Thanks in large part to the director of the musical who also became the director of the filmed version of the musical, you see everything – and even more – since the director knows where to focus your attention and when to go wide so you can see the entire stage. 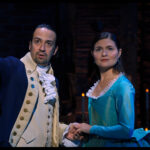 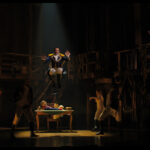 That is the difference between seeing a musical live and in-person and via recording – the ability to freely enjoy it in your own way, perhaps even feel the risks of things potentially going wrong. While that feeling can never be replicated via a streaming video, “Hamilton” on Disney+ is captured and presented in such a way that makes it accessible and enjoyable in the only way we can enjoy live musicals right now.

Even if you’ve seen “Hamilton” in a theater before, this performance will feel fresh as it is a live capture of a few performances edited to become one. This is not simply B-roll footage layered over the original ensembles’ soundtrack recording. It’s better.

Combine all that with the uncanny resemblance of the story to what our country is going through right now like Iger mentioned, and you have something timely, meaningful, hopeful, and just plain entertaining for everyone.

The entire 2 hours and 50 minutes of “Hamilton” (plus a 1-minute Intermission) will be available to stream only on Disney+ on July 3, 2020.

Editor’s note: An advanced screener of “Hamilton” on Disney+ was provided for this review from Disney+ Media Relations.