You’ve probably seen the name Sam Carter within the #DisTwitter sphere. His tweets are unique in that they show a different side of Disney that we don’t often talk about: design.

Cleaning out the garage, found these treasures from my Disney day. Love me some lollipop signage. pic.twitter.com/IcpjnoCLHA

Carter is a former experience creative designer for the Disneyland Resort, having worked in that role for nearly two decades before he was tapped to lead design for USC.

Just love for Disney is something that you probably have seen or continue to see when visiting the resort, from signage to parades, marketing materials and more. To the visitor, all this is just part of the experience. To Carter, however, it’s a much more involved process that takes everything into account from colors to use and how guests from every corner of the earth receives those visual messages.

Enjoy our full interview with Sam about his design sense and Disney story below!

DE: Share a little of your life background (childhood, school, etc.) and how it inspired your career journey
SC: Grew up in Orange County, near Disneyland. Been going there so often and at an early age I can’t remember my first trip. But I knew I always wanted to work there in some capacity. When I was in 4th grade i wrote a book report about driving the monorail, but as I got older I knew I wanted to work in the art department at the Park. I didn’t really know about WDI at the time, I just knew I wanted to create the art that helped make the magic at DL. I spent a lot of time in the Disney Gallery above Pirates in the 80s and 90s daydreaming about what I would want to design for the Park.
DE: What was your first gig working for The Walt Disney Company? What did you learn doing that?
SC: Since I was too young and inexperienced, and wasn’t really sure how to get into the art department, I thought the next best thing was to work in the Parade department. I started in March 1995 with the Main Street Electrical Parade and Lion King Celebration that year. I learned what it felt like to have a job that you loved so much that you couldn’t believe you actually got a paycheck for it. In hindsight it was my first understanding of having a career where you can do what you love. And best of all most of the friends I made back then I still hang out with today.
DE: What other roles did you do working for Disney? What did you like about them? Favorite projects?
SC: I worked every parade at DL from 1995 – 2006. Ended with being in charge of the drivers for DCA’s Block Party Bash. After spending a decade in Parades I finally got into the art department, thanks to nonstop networking, inquiring and trying hard not to be annoying. Once I was an Art Specialist in TDA, I art directed a ton of events, cavalcades, meet & greats and VIP parties. I think my favorite event was a private wedding that was themed to Nightmare Before Xmas, and since it wasn’t when the Holiday attraction was up and running I was able to use almost all of the actual set pieces from the ride. Currently my connection with the company is with the WonderGround Gallery. I’m incredibly lucky to one of their artists and have to pinch myself every time I realize I get to create that kind of art. It’s been a life goal for as long as I can remember. I was inspired by the works of Disney artists Bryan Jowers, Charles Boyer and Larry Nikolai.
DE: How many years did you end up working for Disney before leaving? Why did you leave? What are you doing now?
SC: I was with the WDC for 17 amazing years. Although I loved what I got to work on I knew that I should probably get some outside experience if i wanted some real career growth, and to be able to make a larger salary. I had a friend from Disney who left to go work at USC and he let me know about a Director of Design position at the University. It was a large bump in responsibility, and helped me get married, buy a house and have kids. I was there for 7 years until I just recently left to focus on my experience design full time. I’m now the Chief Creative Office of Carter Creative, and I work on a wide variety of entertainment, events and themed entertainment projects around the country.
DE: You’re quickly becoming “Twitter famous” with all the Disney content that you’re sharing from your time working there.
Why do you think you’re getting noticed? Do you like the visibility? Do you have more stories and content to share?
SC: Twitter has really allowed me to expand my network and connect to both the Disney fans (like myself) and the themed entertainment industry folks. There are a lot of people I look up to and that inspire me on Twitter and it’s created this opportunity that never existed before. I’m honored to be included in some twitter conversations, for example someone might tag me along with a WDI legend asking a question about something, and crazy enough I might know the answer. It’s nice that people know who I am, or appreciate art that I worked on, or even some random Disneyland history tidbit I dropped once. For example when I’m visiting Disneyland with my kids and someone comes up and tells me that they enjoyed a podcast I was on, that means a lot. Last October I had a signing for my art at the WonderGround Gallery in Downtown Disney. 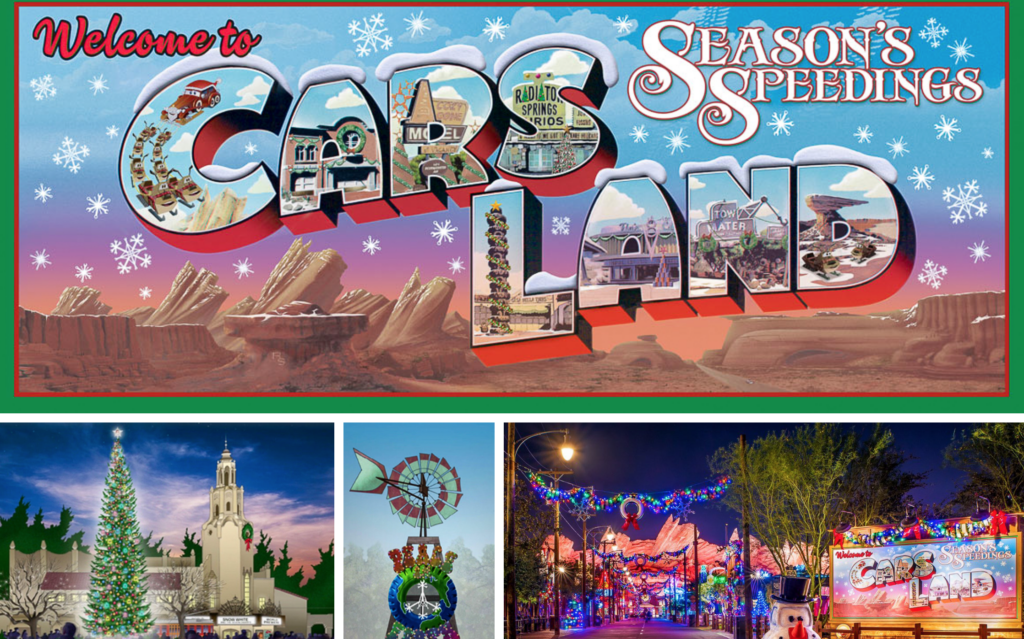 Carter was responsible for helping design the art used in the Cars Land holiday overlay at Disneyland Resort.

I was amazed how many people in line knew me from twitter or just my social presence. It was hard not to have full on conversation with each of them, I can be really chatty. Also on twitter I like to share my history, experience and brain droppings of info from my days in parades. It was one of those things I didn’t think people really cared about, so it’s nice to see those moments becoming conversations. When I was younger and trying to network and grow my career to do what I loved for a living, and pay the bills, it definitely wasn’t easy. There wasn’t the obvious “go-to” person to help you guide the way. It was a collection of special people and mentors that help you get to the next step. I think that’s part of why I like to make myself out there and approachable to help pay it forward because I know when I was in those shoes I could find a lot of value in that.
DE: What does design tell you about the human experience? If Disney didn’t have good design, do you think people would still care about things like theme park experiences as much?
SC: People cherish their memories, nostalgia is everything. Whether it’s from being a kid back in the day, or just being with their family today. As we get older, so do our parents, so we cherish those memories and experiences even more. Tomorrow is never promised to us so it gives us that human instinct of making every moment count. I don’t think anybody has designed a world that does that better than Disney, they allow family and friends to “leave today” and create those memories together. Sometimes it’s a guest who only visits the Resort once in their lifetime, for others it’s their only visit that week, it’s the same high level of an experience. And to know that I got to have even a small hand in that for guests inspires me to keep going and take it to the next level. I’m very lucky to be able to be on both sides of that equation.
DE: What’s one piece of Disney memorabilia you have? How did you get it? What is it’s importance to you?
SC: There is a piece of a float from Eureka! that I was able to purchase from Disneyland Property Control that I have. That means a ton because as a kid I was blown away that Walt Disney World had multiple parks, but over here we just had the one. Then comes 2001 and I was on the opening team to open Disney California Adventure with the Eureka Parade. So it’s a nice to see hanging in my garage every time I come home.