So much of what we come to love about the Marvel Cinematic Universe comes from the long-term connections we’ve had to Iron Man, Captain America, and the other of Earth’s Mightiest Heroes.

But now that we’ve officially moved on from the core Avengers with 2019’s “Endgame,” what is to be said about the future of the MCU? No need to look further than the next MCU film that begins Phase 4 – “Black Widow.”

And “Black Widow” is very much about Black Widow herself, also known as Natasha Romanov. As one of the original Avengers introduced in the MCU, we still haven’t been able to glimpse into her origin story or really even say a goodbye to her after the demise in the final Avengers film.

Those holes are filled with her standalone film. As has been reported, “Black Widow” takes place in between the events of “Captain America: Civil War” and “Avengers: Infinity War,” which means pre-Snap and pre-her-death.

It’s a very interesting place to put a movie that filmmakers wanted to be an origin story film as well as a tribute to her before her passing because there very much is room for a new narrative to grow.

One of those narratives is the origin story, and the first few minutes of the film does flashback to a time that then sets the tone of the entire film moving forward, as well as Natasha’s character arc. Get ready for an explanation for the Russian roots and the “family” issues that result from it.

The arc then spills into more of a tribute to the Black Widow character later on towards the conclusion of the film. So much of who Natasha was to us over the years as an audience was connected to Steve Rogers, Bruce Banner, Clint Barton and the rest of her Avengers family, but this film intentionally separates her from them to tell a more full story about what kind of person she is apart from avenging.

As we’ve seen in very short flashbacks and dialogue in referencing her past, Natasha Romanov’s history is complicated and at times very troubling as her young life was already scarred with physical abuse and emotional trauma that seemed to haunt her into the present. This standalone film leans into all that heavily, which means there will be times that the material might go pretty dark – so fair warning.

As an aside, the darkness is balanced out pretty well thanks to the comedic and light-hearted chops of the characters played by Florence Pugh and David Harbour! 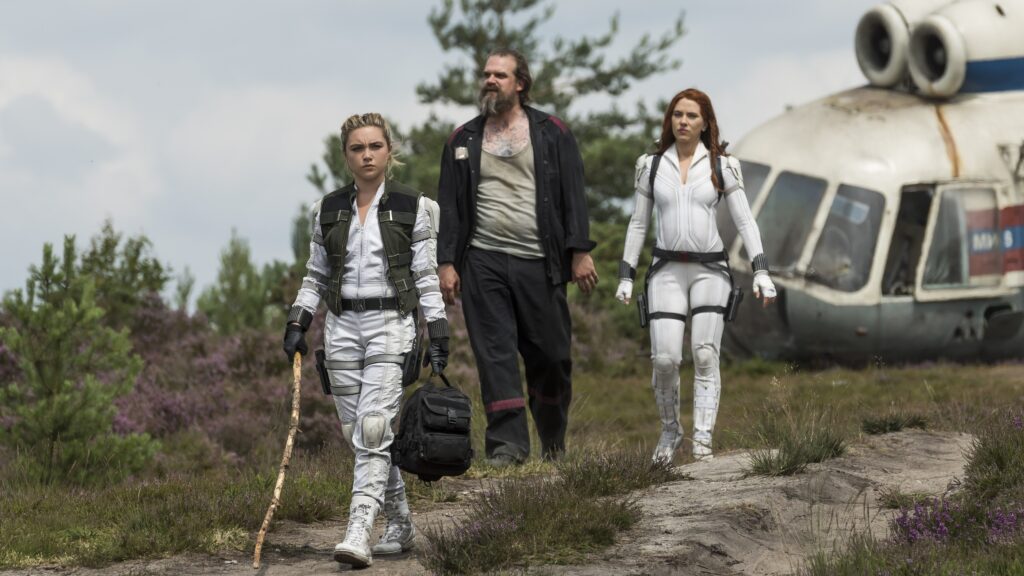 However, like Western stories often do, it doesn’t end on a troublesome note, but a hopeful and maybe an unresolved one, setting us up for a new MCU that we can appreciate apart from the Avengers (so be sure to stay into the credits, too!)

While we do know what happens to Black Widow eventually, “Black Widow” very much set up that sacrifice as not just as a necessary one, but one that is filled with intention as much as there is melancholy.

I can’t think of a more perfect Black Widow film than that itself.

These films have been screened prior to the release date for review purposes and therefore are viewed without charge courtesy of Marvel Studios/The Walt Disney Studios.