All That Glitters: The Crown Jewels of the Walt Disney Archives is the newest exhibit at Bowers Museum, continuing the relationship between Disney and the Santa Ana, CA museum located just a few miles away from the Disneyland Resort.

The new exhibit focuses on showcasing objects from the illustrious film and TV archive that very much glitter. While you’ll find props like the magic lamp used in Disney’s live-action “Aladdin,” you’ll mostly see costumes and accessories that make the characters on-screen. For instance, there’s a wall full of different watches used by characters like Corbin Bleu’s digital watch in High School Musical all the way to Tom Hanks pocket watch seen in “Cast Away” (a Fox feature).

Add in rings and crowns from a plethora of Disney and Disney-owned properties and you very much have a fitting name for the exhibition, and the first one to debut since the closures due to COVID-19. 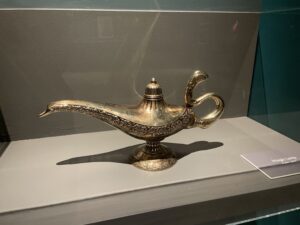 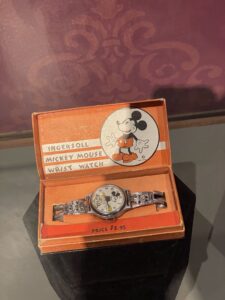 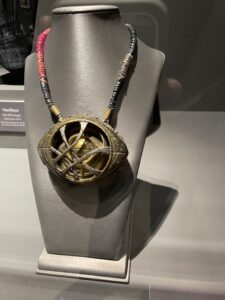 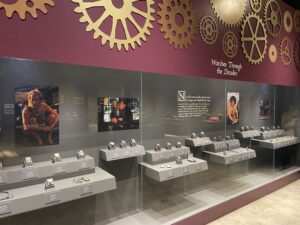 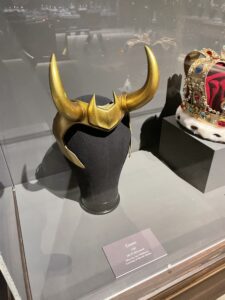 “During the pandemic, I asked our exhibits team to come up with some ideas for upcoming exhibits and they all came up with some great ideas,” said Becky Cline, director of the Walt Disney Archives. “Our Registrar, Melissa Pankuch, had the great idea of creating an exhibit celebrating the wonderful accessories and jewelry in our collections. And off we went! The artistry that goes into these pieces is wonderful, so we’re very excited to showcase it in this way.”

She continued, “These are all very special pieces that add so much to our films, and this is a fun new way to present our amazing assets – from elaborate crowns and tiaras to shiny rings and powerful pendants, all of these pieces have a great story to tell!”

This isn’t the first time that Disney has partnered with Bowers. Back in March of 2020, Inside the Walt Disney Archives was the first-of-its-kind exhibition that provided a large and safe space for the Archives to showcase many of their objects outside of the Archives itself.

He added, “After the success of that exhibit, we knew that All That Glitters: The Crown Jewels of the Walt Disney Archives would be a perfect follow up exhibition to highlight an incredible collection of jewelry and accessory items from many of Disney’s movies, television shows, special events and more.”

All That Glitters: The Crown Jewels of the Walt Disney Archives debuts at Bowers Museum on December 12 and runs through June 2022. Tickets and more information can be found on their official website.

Our special thanks to Becky Cline and Michael Vargo for contributing to this story!