When we last spoke to Jacob Batalon, he was fresh off his first time playing Ned Leeds opposite Tom Holland in the reboot of the Spider-man film franchise. Back in 2017, the then 21-year-old didn’t know how huge the film would be, and subsequently, how much his life would change after that.

Now 25 and three Marvel Studios-sanctioned Spider-man films later, the Honolulu-born actor is able to reflect on how a whirlwind of an experience it has all been.

“I owe a lot to this job,” Batalon told us during a video call during the global press tour of Spider-man: No Way Home. “I feel more seen because of Spider-man.”

He went on to share how everything about his rather normal life has changed (just like Ned) since playing Spider-man’s best friend in these three films. “Everything is crazy and mostly good, but that change went into everything: how I work, how I handle my relationships, and even the types of opportunities I get.”

Batalon is Filipino, and acknowledged that doing something with a higher profile like a Marvel Cinematic Universe film is affording someone who looks like him jobs like a new TV show he is currently filming.

He is proud of the love that his fellow Filipinos have given from the beginning. “I went to Manila in 2019 [for press for “Far From Home”], and I was so grateful to see family, friends, and just everyone there have my back. I felt the love through and through.” 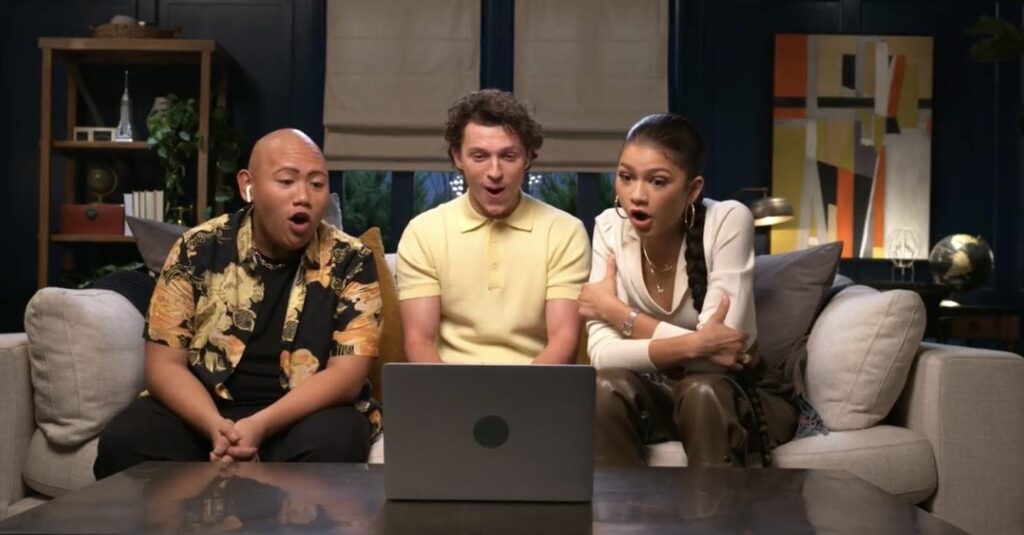 And love is something that Batalon felt for his co-stars since “Homecoming,” Tom Holland and Zendaya. “I already knew that they would be a light for me for a long time,” he said. “But even getting to do this film in a very tough time for everyone made me realize how much of a light we all were for each other.”

While details relating to “No Way Home” have been sparse, Batalon described his character to be getting more screen time and his own emotional arc. It apparently all reflected directly to the range of emotions that came with filming a storybook ending-type of picture. “We were very happy on set given the circumstances,” he said. “But the last day filming was emotional for many reasons.”

He added, “We know the pressures of filming something so special, but we did because we also know that the world needed something like this. We hope that given everything that has happened, people can come and enjoy something and smile for a bit.”

See Jacob Batalon in Marvel Studios’ Spider-man: No Way Home will exclusively be in theaters on December 17, 2021.

Look for our spoiler-free review of the film on December 13.

Our special thanks to Jacob Batalon for contributing to this story!