Yesterday, Disney announced its plans to develop residential communities. The first location will be built in Rancho Mirage, in California’s Coachella Valley. The developments will be known as Storyliving by Disney and will be spearheaded by Walt Disney Imagineering.

The master planned community is promising prospective residents opportunities to “foster new friendships, pursue their interests and write the next exciting chapter in their lives—all while enjoying the attention to detail, unique amenities and special touches that are Disney hallmarks.”

Renderings show a new lake, neighborhoods (even 55+ senior living!), shops, public squares, and more. Take a look from far away and you might even see the standard hub-and-spoke layout of a Disney park informing what is being called the community of Cotino.

The news seemed to have caught a lot of people off guard, but was Storyliving by Disney the second coming of Walt Disney’s bold and ambitious plans for EPCOT? Or is it just part of Disney’s larger initiative as of late to evolve Disney’s storytelling for storyliving? We definitely feel the latter and here is why. 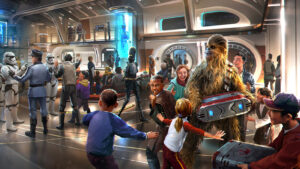 However, this isn’t the first time that Disney has created a community with these principles before either. Golden Oak at Walt Disney World Resort was made as a neighborhood of luxury single-family homes that benefitted from Disney World service and benefits. Also in Florida, Disney built the entire town of Celebration to be a hub for cast members and their families that worked nearby to live and play.

This is all part of their plan and we should’ve seen it coming. Disney wants its fans to have more active experiences as well as develop an even deeper connection to its brand, and what’s the best way to do that? Build a tried-and-true community.

Concept art and somewhat broad Imagineer Q&As have followed the announcement of Disney’s next bold consumer offering, but questions and maybe even hesitations still remain.

Will future Storyliving by Disney properties give more of a Disney resort flavor with Disney characters and experiences pulled from its movies and TV properties? Or is Disney just betting on original experiences empowered by its fan base and its branding alone to sell the community?

It’s clear that with Disney’s fascination with building more hotels and testing out storyliving experiences that they would eventually try to do their own residential communities, even if it is with a developing partner. Disney has wanted to expand outside of its theme parks as of late, and this new development makes the utmost sense.

“As we prepare to enter our second century, we are developing new and exciting ways to bring the magic of Disney to people wherever they are,” said DPEP Chairman Josh D’Amaro in the press release. “Expanding storytelling to storyliving. We can’t wait to welcome residents to these beautiful and unique Disney communities where they can live their lives to the fullest.”

In other words, it’s Disney placemaking but for the real world.

The whole Storyliving by Disney concept gives Imagineering something new to explore and refine over time especially in what is expected to be a quiet few years for theme park developments post-COVID. It’s also another way for Disney Parks, Experiences, and Products to diversify its revenue streams.

It’s a bold bet for Disney but in reality, we should’ve seen it coming. Storyliving is a bold new future for Disney and its various upcoming experiences, whether you’re in a galaxy far far away, or in Rancho Mirage, California.

Be sure to follow us here and on social media for more news on Storyliving by Disney, including when construction begins.

Special thanks to Zach Perilstein from Boardwalk Times for contributing to this story!