“So how exactly do you explain Star Wars: Galactic Starcruiser?”

It was a singular very valid question that Scott Trowbridge, a creative leader for all of Disney Parks’ Star Wars work, asked to a small gathering of press, as well as Lucasfilm, Walt Disney Imagineering, and Walt Disney World leaders.

It’s a common question that many have had since the announcement of the project came back at the D23 Expo in 2017. Now four years later upon the first “voyage” and opening of the experience, even those who created it seem to have an answer.

“We want to immerse you as well as invite you to make your own Star Wars story,” said Ann Morrow Johnson, the executive producer and creative director for the project.

“The experience is a whole bunch of things: theater, alternate reality game, and cruise ship experience all rolled up,” said another creative executive Wendy Anderson.

While the answers are varied, it apparently needs to be since nothing like this has been done before. “We’re literally making up another vacation experience for our guests,” said Jerome Smith, Starcruiser’s general manager. 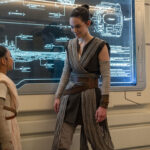 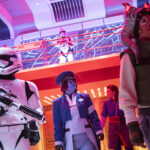 One phrase kept coming during the hour-long presentation at Walt Disney World to preview the experience was interactive “immersive theater.” What exactly is immersive theater?

Immersive theater is when you basically remove the stage in a theater and have the characters and plot take place in and around the audience. You can think of Star Wars: Galactic Starcruiser as basically a two-day, two-night long theater show, where the show happens to be in the Star Wars world taking place in the timeline between the events of Star Wars: The Last Jedi and Star Wars: Rise of Skywalker.

And the actors in the show? The Disney cast members. Throughout your time aboard the Halcyon (the name of the spaceship that you ‘board’ for the experience), you will encounter other guests like you, but most of the time you will be meeting and interacting with Halcyon staff aka Disney cast members who will fully be playing a character in a Star Wars world.

One moment you’ll be learning how to operate a weapons station on the bridge from the blue-skinned captain. In another moment, you’ll be chatting it up with a First Order lieutenant about joining their cause in the Sublight Lounge.

In many ways, this experience is more than just immersive theater. It’s interactive immersive theater. There is lightsaber training, other-worldly looking food and beverages, a shop with Starcruiser-branded merchandise, and a place to play a holographic version of Sabacc.

But the interactivity within this alternate reality immersive theater experience is really what makes this experience truly unique and one-of-a-kind, and perhaps why you shouldn’t spend the $2,400 (per person) if you plan on just “hanging out” on the ship.

Yes, there are nicely appointed cabins with modern amenities like wi-fi for you to recharge and sleep in, but this isn’t a cruise that you probably would want to really rest on even though it may become tiring at points throughout the 2-day, 2-night journey. 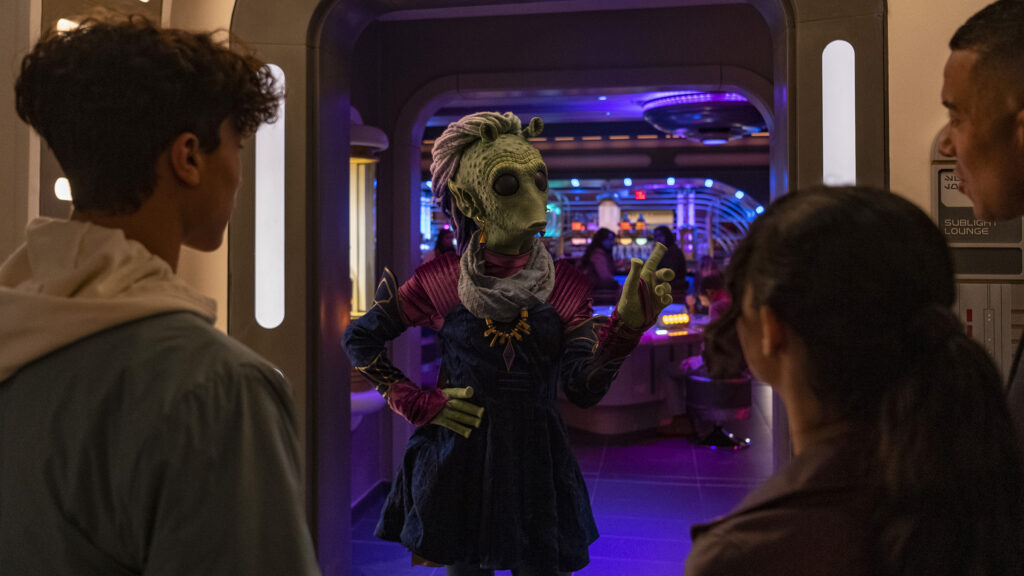 My time on the Halcyon was only for a little bit, but because I decided from the moment I stepped aboard the starcruiser that I would play in this world, really consider my own character’s decisions, and letting myself go no matter what happened or when, I think I got the most you can get from the experience. And if you’re shy and introverted at first, have no fear. There will be many times where you’ll be invited into what’s going on and play along, too.

So, what exactly is Star Wars: Galactic Starcruiser apart from an invitation into something new for a vacation. It’s a Disney vacation still, so you can expect a lot of things to do, but these are new things that almost require something of you in order to fully enjoy it all.

TLDR; it’s a LARP (long-action role playing) vacation for those who want to live, vacation, and make your Star Wars dreams come true.

When Scott Trowbridge announced Star Wars: Galaxy’s Edge, he promised a place where you could really live out your own Star Wars story. With the impending opening of the Halcyon to guests on March 1, he and Disney are finally fulfilling that promise in this interactive immersive theater encapsulated in an overnight vacation experience taking the form of an intergalactic space cruise experience.

But just like on a real cruise, there’s so much to experience, even in the middle of the night. Will the Force within you beckon you to follow it regardless of the hour? The $2,000+ price tag says you should, and because it’s all happening in the world of Star Wars, you’ll probably have a good feeling about it, too.

We’ll have much more behind-the-scenes stories in the coming weeks about how Walt Disney Imagineers, Lucasfilm, and Walt Disney World made Star Wars: Galactic Starcruiser experience a reality.