Editor’s note: this story is part of our series going behind-the-scenes of Pixar’s “Turning Red.”

When Domee Shi made her Academy Award-winning short “Bao” back in 2018, she never thought that she’d be able to instill more of her real-life. But that all changed when her real-life story got picked to be Pixar’s next feature film.

“Pete and the leadership team really liked my coming-of-age teen girl stories I pitched,” Shi said in an early virtual press day. “It was a lot of me growing up in the early 2000s and being obsessed with anime and boy bands, but it was a lot of that growing up part that made the story.”

Shi went on to share more about the close relationship she had with her mom during that time that ultimately changed as she was changing. “I was being pulled in two different directions of having friends and liking boys, and being close to mom and honoring the family through our traditions.”

That very familiar tension of being an adolescent for Shi is essentially what became the core problem that drives the story of “Turning Red,” but all told through the life of Meilin Lee and her mom, Ming.

As many have seen in the trailers, the story of Mei-Mei and Ming is also told through the lens of their cultural upbringings in the cities they lived in. Both are taken directly from Shi’s upbringing, having grown up as a Chinese girl in Toronto, Ontario, Canada. To that end, Shi enlisted her production designer she worked with on “Bao” to set the scene of the story.

“I decided to work with Rona Liu, who was production designer for “Bao” short, to be production designer. We just wanted to build on what we started with in the short, and showcasing the authentic details of the Chinese household,” Shi said. 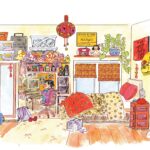 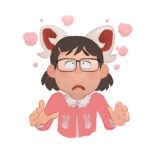 That meant including a lot of the architecture and items that filled and made her home in Toronto growing up. “We ended up looking back at ourselves as tweens through old pictures of our rooms and things. It all ended up heavily influencing our design aesthetics in the film,” she Rona Liu.

As for the animated city of Toronto, Liu added that it all was really just building on things that she started in “Bao.” Liu said that they just were given a “bigger sandbox” to tell that “bigger story of what life was like for a Chinese kid to grow up in Canada.” That included the detailed designs of the buildings in downtown all the way to the family temples where Chinese families honor their ancestors.

Even the character of Mei-Mei was infused with authentic Asian characteristic traits. Visual effects supervisor Danielle Feinberg said Shi told her to watch a lot of anime to get down some of the exaggerated effects that her main protagonist should have when turning into that red panda when she gets emotionally pushed. “You can probably call our design language ‘chunky cute’,” Feinberg said.

As for the animation style of the red panda (lovingly called Panda-Mei by the team), they pulled inspiration from observing red pandas at the local San Francisco Zoo. “We watched a lot of their movements, and found out that when they get startled, they stand up and raise their front paws,” said animation supervisor Aaron Hartline. “So we obviously had to have Panda-Mei do that, too.”

Through all this infusion of Shi’s life into her main character (“Pixar’s first tween girl protagonist”, plot, and movie, she does hope that little girls all over the world who find it hard growing up can watch her movie and know that it’ll all end up okay in the end.

“Yes, you’ll have to say goodbye to a relationship you once had, or might feel the pressures of living up to an expectation, but it’s going to be okay. If I could tell my own younger version of Mei-Mei that now, I think I would tell her that and laugh along the way.”