During a preview event at SXSW this week, Pixar and Porsche announced their partnership to create a real-life Sally Carrera car inspired by one seen in Pixar’s “Cars” film.

In the film, Pixar filmmakers ended up making Lightning McQueen’s love interest a Porsche, and more specifically a 2002 Porsche 911 Carrera. As the 20th anniversary of that particular model approaches, Style Porsche, and Porsche Exclusive Manufaktur approached some of the Pixar production design team who worked on the film to help make the car a reality.

During the event at SXSW, Pixar’s Jay Ward and Bob Pauley who both designed Sally for the film showed off some of their behind-the-scenes design process in creating the real car which has already taken place over these past few months. While it will be inspired by Sally, it will not be an exact copy of her. 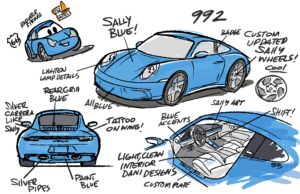 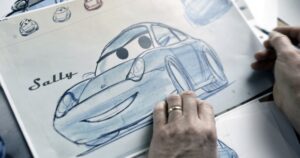 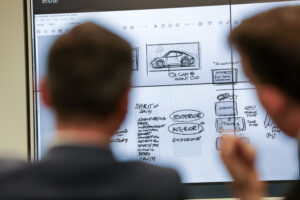 Like in their films, the deep attention-to-detail will also inform the real car’s design – from the specific color hues, types of tires and rims, and even the interior (which you don’t even see much of in the film).

When completed, the car will be road-ready to take on road trips just like the ones shown in the film like to Radiator Springs and Route 66. But how can you take the car for that trip yourself?

The one and only car being produced through this collaboration will be auctioned off later in the year to the highest bidder through RM Sotheby’s auction house with proceeds going to charities. With the ongoing war going on in Ukraine, Porsche and Pixar decided to benefit organizations who are working to provide aid and support to those affected, predominantly women and children fleeing the country for their safety.

Proceeds from the auction will support life-changing programs for girls and young women through Girls Inc., as well as the USA for UNHCR, the UN Refugee Agency, to provide aid to children and their families affected by the conflict in Ukraine.

“We wanted to help, somehow, and as a team we realized we could perhaps harness what we were working on to raise money. The whole project began with the premise that Sally’s character was devoted to helping others and it seems right that this should continue 20 years on”, explained Jay Ward, Creative Director of Franchise at Pixar Animation Studios.

We’ll be following the progress of the car to its completion, so follow us on social media for more as we get closer to meeting the real Sally Carrera!