Think of any memorable movie scene like dinosaurs in a theme park to lightsabers, and chances are that the movie magicians behind it all came from ILM.

Now thanks to screenwriter Lawrence Kasdan (“Star Wars”) and director Ron Howard, Light and Magic will finally tell the story behind the visual effects powerhouse started by George Lucas.

ILM, or Industrial Light and Magic, was the brainchild of Lucas back in 1975 and was meant to be his visual laboratory for his film, including Star Wars: A New Hope (1977). Combining the smartest minds in computing and most creative visual artists of time, ILM today still stands as the entertainment industry’s go-to choice for any visual effects work.

“We have about 20 projects at any one time,” said Lynwen Brennan, Lucasfilm’s Executive Vice President and General Manager, and also oversees ILM’s operations since it is a division of Lucasfilm. “The spirit has always remained the same- we start with yes, and figure it out from there.”

Both her, director of the docuseries Kasdan, Howard, and some ILM’s founding members like Joe Johnston, Dennis Muren, Phil Tippett, and Rose Dunigan spoke at a Star Wars Celebration panel today, showcasing their project publicly with footage for the first time. 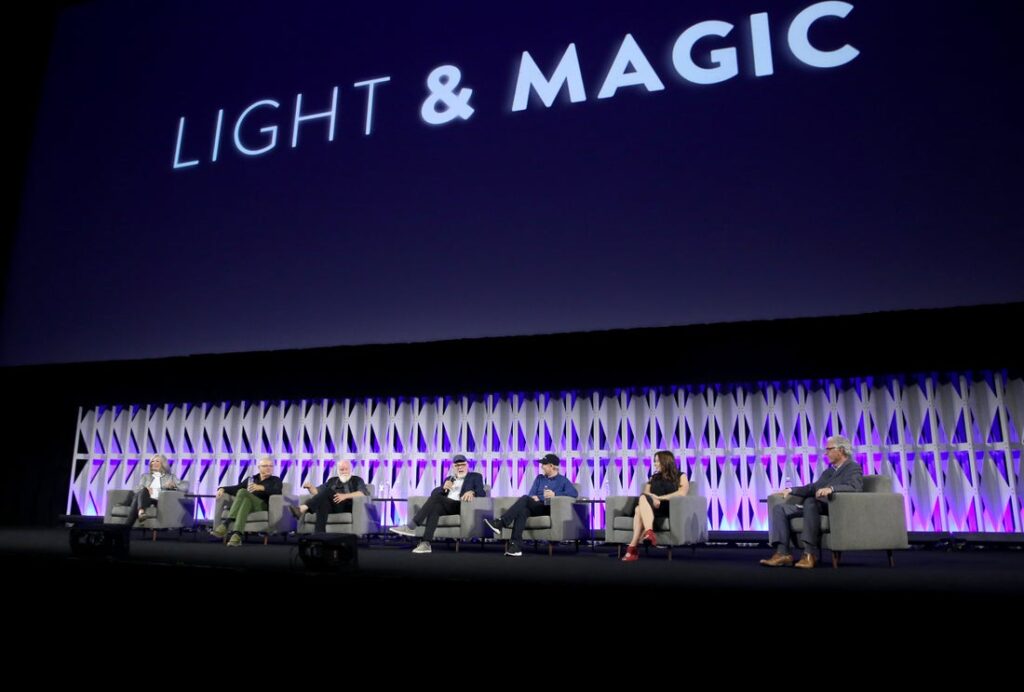 Many of ILM’s projects from their clients, which is nearly every major film studio, comes with a question that challenges possibility, like making dinosaurs for “Jurassic Park” look real or creating a dangerous and enchanting weapon like a lightsaber for “Star Wars.” But pushing the boundaries of what’s possible visually hinges on something important.

“It’s all about story,” says Ron Howard. “The hope is that folks like ILM do their job so well that the visual magic they’re making lends itself to the characters and the stories they’re telling.” In other words, you don’t really need to know how it’s all done in order to enjoy it.

However, Light and Magic’s purpose in being made is less about showing audiences how world-class visual effects are done, and instead tell the stories of the people who did them.

“The hope of the doc is to put faces behind the art form, which extends the fascination in this type of work even more,” said Howard. Added Lucasfilm’s Brennan, “Additionally, we hope that the doc does a great job at recruiting new visual effects fans to do the work. Just like George [Lucas], we need young people thinking about what worlds we’ll build next.”

All six episodes of “Light and Magic” will stream exclusively on Disney+ starting on July 27.