You may not know his name, but you certainly know his work. David Korins has been the creative leader behind some of the world’s most visible productions, including designing the stage for the Oscars and, most iconically, the stage for the musical Hamilton.

Now Korins is moving into another project working with Disney Animation to bring the magic of those films to audiences all over the globe.

Disney Immersive is an immersive traveling experience that will allow guests to step inside their favorite Disney animated films, both past and present. It was the near-perfect project for Korins to be a part of because he comes in as a fan like everyone else is.

“They had me at hello. I’m raising two daughters with Disney movies and I’ve been so fascinated with it all since my childhood. This was a dream come true for many,” Korins said.

Discussions between Korins, who works with Lighthouse Immersive (responsible for the popular Immersive Van Gogh experience), Cocolab FX, and the Walt Disney Animation Studios began in Disney back in 2021. Since then, it has been about creating a Disney “attraction” that celebrates animation.

Korins says that the experience contains three parts: the story of Walt Disney himself and his groundbreaking animation process, seeing the iconic Disney characters that were inspired by that process, and then be able to celebrate the visuals of all the films together.

The beginning of the experience will start will Walt’s story, but the process and the people that came after him were crucially important for Korins to bring out as well.

“These are some of the most talented visual artists of all time. It’s worth celebrating them and their brush strokes and simple pencil lines that led to work that still stands up after all these years,” Korins said. 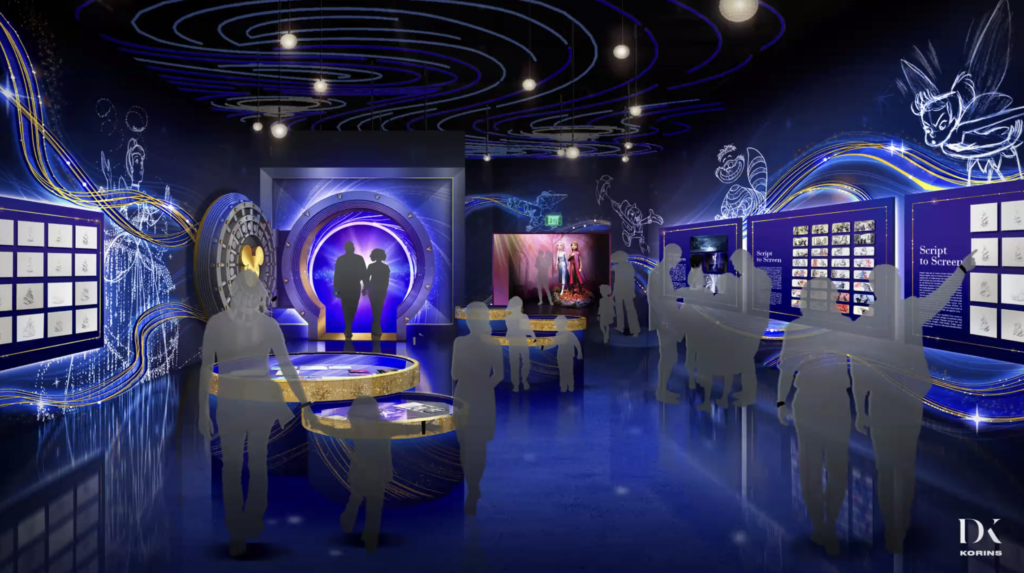 As for the finale of the 47-minute experience, Korins thought it would be great to bring guests into someplace that they had never been to before: the Disney Vault.

He says it’s there where guests will really be surrounded by the lauded iconography of all of Disney Animation’s films. Like its Van Gogh predecessor’s finale, the culminating moment of Disney Immersive will use Lighthouse’s 360-degree video projection technology along with each film’s music scores and mash it all up for a celebration of all things Disney animation.

Korins also says that working with Disney Animation so closely also made the experience of creating it even more delightful. “We got unprecedented access to their own vault called the Walt Disney Animation Research Library where we got to see these original pieces of art that led to all these movies.” He went on to say that there would be original animation created for the final moment as well.

Altogether, it’s a 47-minute experience that will create an all-new story out of all the stories that have been made over the 100 years the animation studio (and thus The Walt Disney Company) has been around. Korins hopes that people will not only know the legacy they are stepping into, but what it means for themselves.

“We don’t create experiential events for ourselves. This will be a visceral experience that will make them feel something. I can’t wait to see that for myself when we open this all up to the world,” Korins said.

Disney Immersive is now open in Toronto, Ontario, Canada before it comes to the United States for a multi-city tour. Find out those cities and more by visiting DisneyImmersive.com.

Our special thanks to David Korins for contributing to this story!