Three things that most of us guys (and perhaps gals too) at DisneyExaminer love…even to today! So when we heard that Disney’s gaming division, Disney Interactive, would be releasing a game that would give gamers “infinite” hours of play, we knew we had to at least give them a chance to wow us.

We haven’t written about Disney video games or Disney Interactive in the past, but we’ve heard the stories. Many of the games that they’ve released in years past have not been the most enticing. They’d release a game in conjunction with a Disney film release, but they never really caught on as a game that major gamers/Disney movie lovers alike would, well, like. The financial results from Disney’s gaming division also show that consumer feedback as well.

But we have always believed in Disney and knew that rumors of this newest video game (being called “Disney’s biggest and boldest video gaming gamble”) would be the knight in shining armor here to brush all that negativity away.

So we went to Hollywood today. 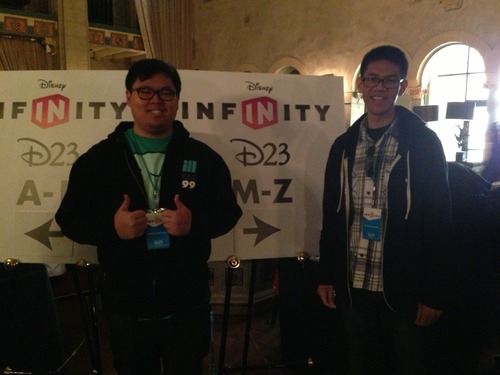 We weren’t invited as a member of the press because we’ve never written about Disney video games before as we’d said, but fortunately, we are members of D23, the official Disney fan club and some of their members were invited to attend the grand unveiling announcement event on January 15.

It was great to be able to be at a press event as a guest as opposed to a press member. We were able to really enjoy and take everything in for once! 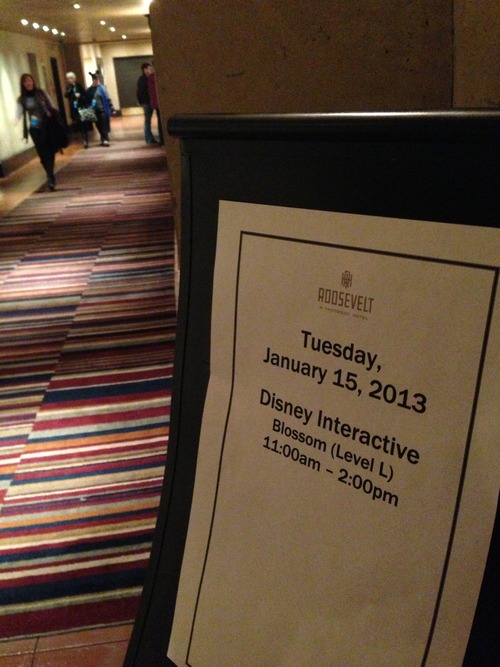 Check-in for guests of D23 took place at the historic Hollywood Roosevelt Hotel right off Hollywood Boulevard and across the street from the Hollywood and Highland Center. It is a fancy hotel folks, so we were sure that we were in for a treat…and a big event in the eyes of Disney! 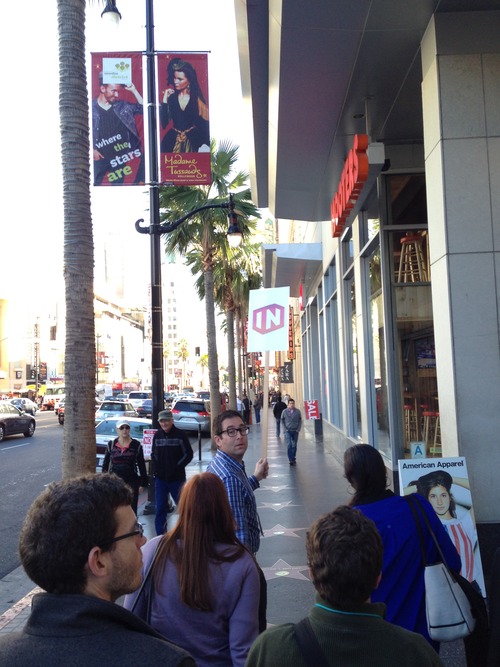 Shortly after 10:30 AM, we and the rest of the D23 guests were escourted to the “undisclosed location” where the unveiling announcement would be made. We were told to walk and because of that, we knew exactly where we would be going because we’re there for movie reviews all the time! 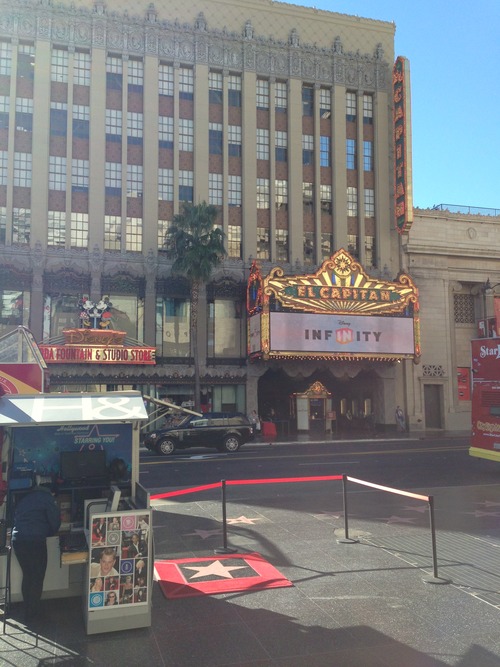 It was the Disney-owned El Capitan Theater! 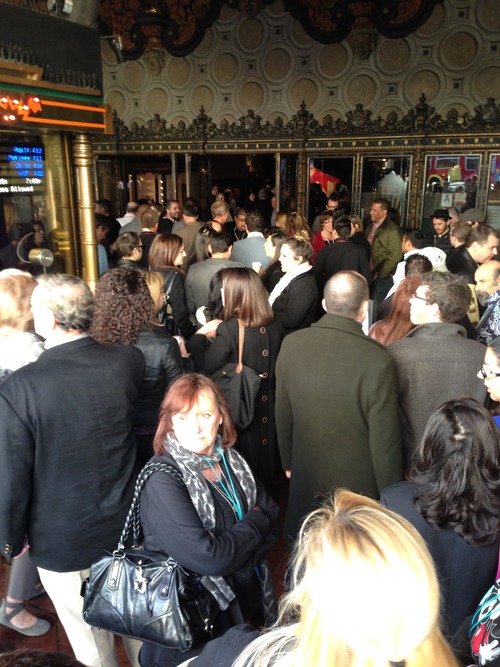 There were tons of people joining us for the event including a global press presence, game developers, retail partners, and Disney Interactive executives.

After those people were ushered into the theater, we were escorted onto the balcony to our seats. 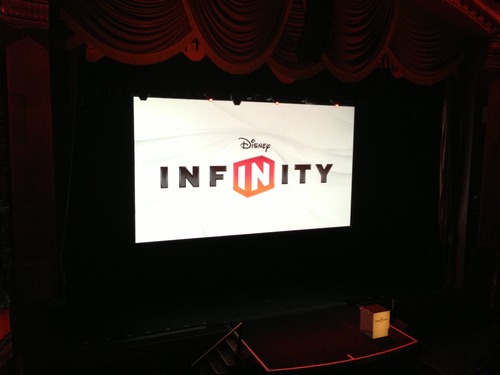 While we were waiting for the presentation to start, we were teased with various Disney music from various Disney films as well as flanked by cardboard cutouts of pretty much all of Disney and Pixar’s characters (not shown).

The lights eventually went down and our view of Disney gaming changed forever. 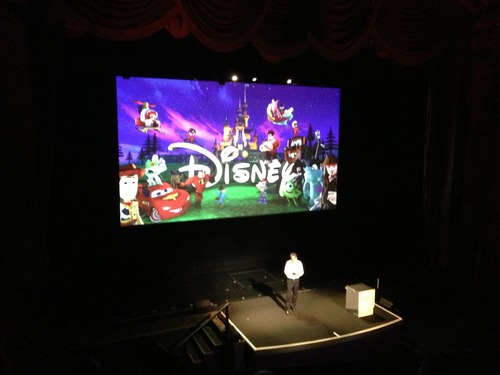 First up on stage was John Pleasants, Co-President of Disney Interactive who began his speech by showing us a video that combined all the Disney characters from the Disney universe into that opening castle and firework graphic you see before every Disney movie. 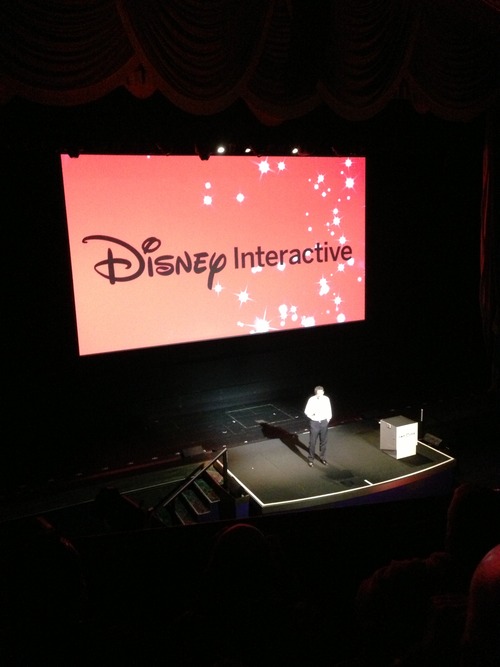 Mr. Pleasants admitted that various Disney divisions (like Disney Studios and Parks and Resorts) have had their time in the spotlight sharing the great Disney stories and experience the company is known for and that it was now time for Disney Interactive to steal that spotlight, at least for the time being. 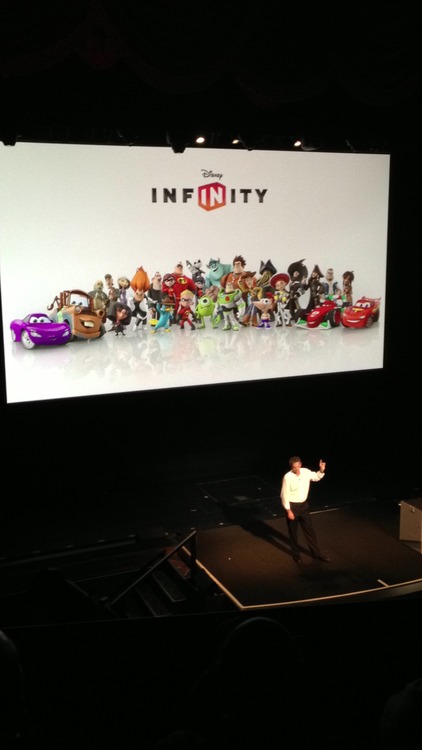 He continued on saying that a majority of the Disney magic that has impacted us the most has come from the wide world of Disney and Pixar characters and stories that have joined the Disney universe in years past. He then posed the question to us – what if you could interact with these characters and worlds?

“We’d like to, please,” we said quietly in our heads.

And so it was. Mr. Pleasants introduced us to the long-rumored and highly regarded “Disney Infinity” – a PLATFORM (not just a game) that will bring your favorite Disney characters and worlds into your hands for you to PLAY with. 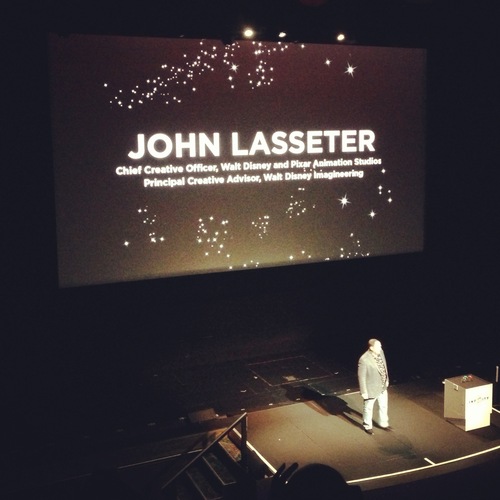 John Lasseter, Pixar and Walt Disney Imagineer chief creative then came on stage to discuss the origins of Disney Infinity. Throughout his whole presentation, he emphasized the word “play.” He alluded to his childhood (and ours too, really) by saying that we used to play a lot, usually with toys.

With toys, we were able to create and establish our own stories and worlds and it would always differ. The possibilities and fun were limitless depending on our creativity and sheer energy. Think of Disney Infinity as those toys.

In a sense, the fantasy world of Disney has been made our toy box. Should we decide to play that way. 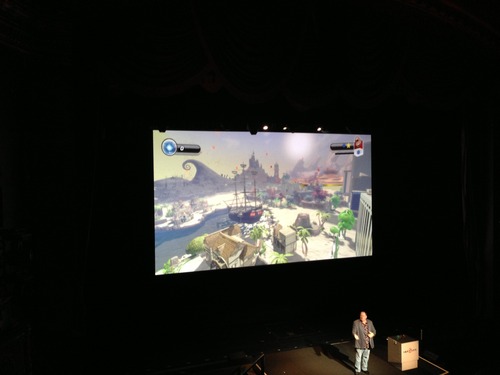 If you’ll notice in the picture that Mr. Lasseter showed us above, Disney Infinity’s platform brings together the worlds of “The Incredibles,” “Monsters Inc.,” “Pirates of the Caribbean,” and what is to be an never-ending slue of future Disney characters and worlds for the first time.

Disney Interactive has announced that the worlds and characters from Disney*Pixar’s “Cars” will join the introductory play sets at the debut of Disney Infinity!**

In the Disney Infinity world, it now gives you the opportunity to either live in those characters worlds and lives and make your way through various campaigns and challenges…

…be able to take ANY of those characters and worlds to create your own world of campaigns and challenges.

We were wow’d folks. The magic of Disney was now at our disposal. We’re sure that you have always wanted to see if Dash from “The Incredibles” could win a race against Lightning McQueen from “Cars.” 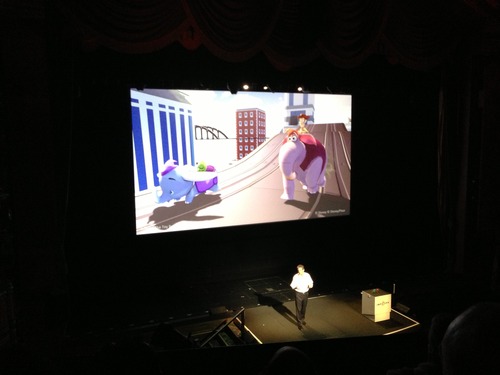 Or perhaps the results of a sprint between Dumbo and and Aladdin’s elephany Abu?

Disney Infinity provides us that opportunity to see those results. Now we know what you’re thinking. How can that be? Is it random?

Well turns out that each of those characters will live in Disney Infinity with the same personalities and abilities that we originally met them with! So yes, Lightning McQueen will have his horsepower and Dash will dash-dash-dash away. 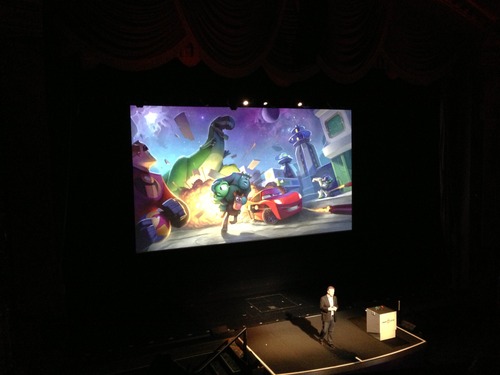 The results of keeping true to those characters and worlds were shown in the concept art above presented by the third presenter John Blackburn, an executive from Avalanche Software, the game studio and main developer of Disney Infinity.

It can be a gameplay of epic and infinite proportions.

Mr. Blackburn then showed us the video below which included shots of the gameplay and what exactly is possible with the Disney Infinity platform. 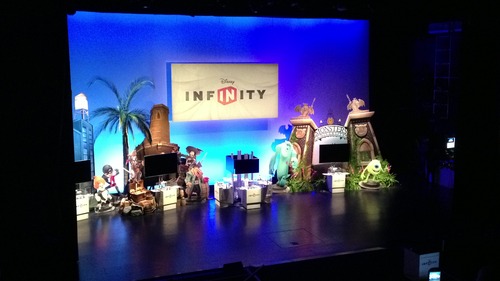 Yup, and with that, the announcement presentation ended and the presenters encouraged us to go to the private receptions that were made for us…that included free lunch and an opportunity to see Disney Infinity in action. 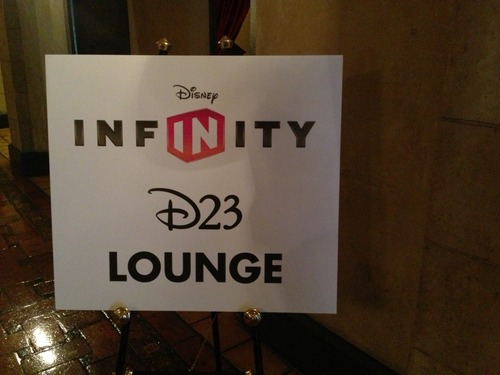 Our friends at D23 had set up a lounge for us inside a very ornate ballroom back at the Hollywood Roosevelt Hotel. The lounge had TV and game setups around the room as well as a buffet-style lunch! 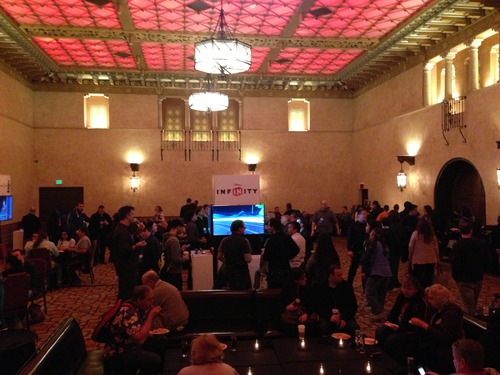 All the invited D23 members eating and eating up all the Disney Infinity action with game developers on hand to show us around. 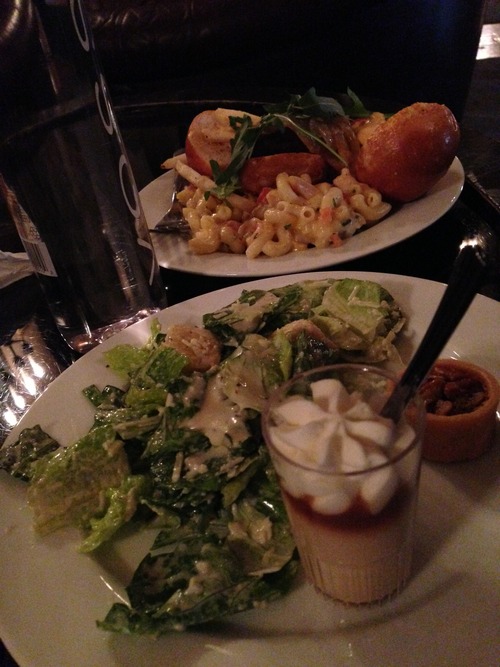 Oh, and the lunch was GREAT too! Special thanks to Thompson Hotels (owner of the Hollywood Roosevelt Hotel) for preparing such a great meal for all of us.

What you need to know –

So after all this, we’re sure you’re wondering how all this will come together and how you’ll be able to get into the Disney Infinity world. We have answers, so let’s begin!

The Disney Infinity Platform will include the following parts:

So going back to the toy concept, Disney will provide real, physical toys, figures, discs and for us to purchase that will unlock the various virtual toys and characters inside Disney Infinity. 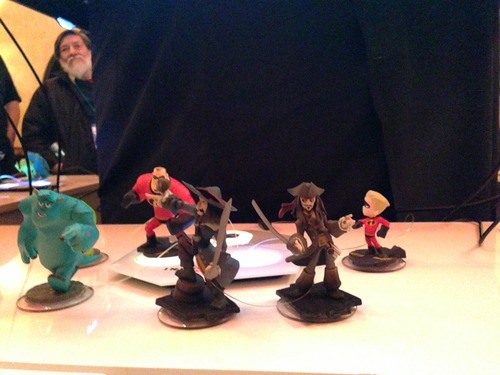 The Disney Infinity Interactive Pieces or Play Sets, those physical toys and figures will represent a story-specific world (i.e. Cars, Monsters University, Pirates of the Caribbean) and Disney Infinity Power Discs (aka upgrades, customization) will represent the extra “toys” that each character can have and use.

Game developers also told us that you’ll be able to upload your creations online and share your world, characters, and props with others around the world (via Xbox Live, etc.).

Moreover, the interactive pieces will act as the game’s memory card so that you can take those exact toys wherever you go and bring them to your friend’s house to play with the exact same achievements and “buffs” you gained at home. 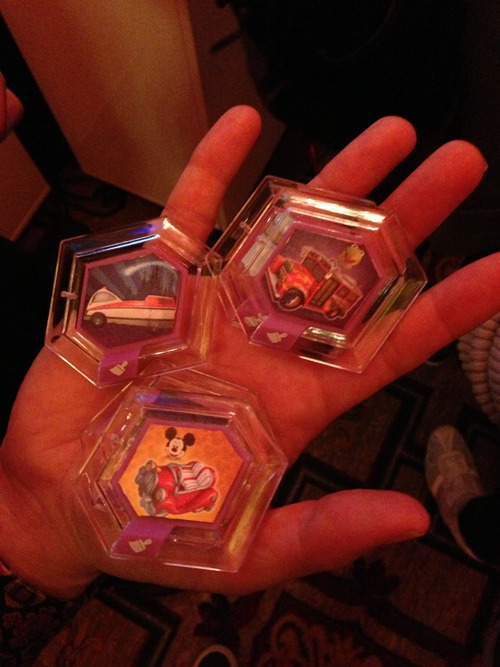 Set it up and all you do is play. But if there is ONE THING that really blew our minds into infinity was how much thought went into creating the game. You will literally see everything that you would see in YOUR everyday Disney world. For instance, take a look at those Power Discs in the picture above.

Some of them seem familiar? Yes, the Power Disc on the top left is the Disneyland Parking Tram which can be brought into the game platform! During the times we got to play the game (which even the REAL press couldn’t do!), we even were able to drive Cinderella’s royal coach as Mike Wazowski while throwing exploding “Nightmare”-ish exploding pumpkins.

The game will have two modes – a “campaign” mode called Adventures (up to 2 players) and the other mode that we’ve been all talking with all the customizations called Toy Box (up to 4 players).

And that’s just the beginning folks. We spoke to some of the game developers there and they told us of all the infinite additions that Disney Infinity will gain in the coming years. With new Disney movies, characters, and stories (including those from Marvel and now Lucasfilm), you can be certain that those characters, worlds, and props will make their way into your hands through Disney Infinity. 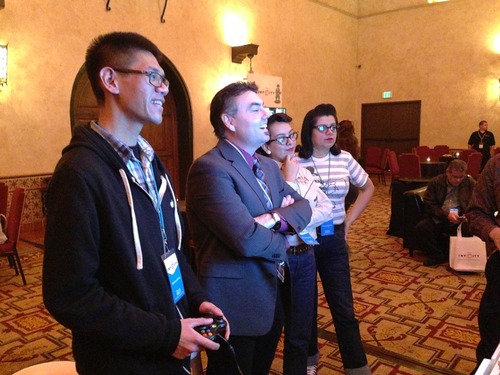 Overall, this game is just fun and memorable and as you can probably tell my our Editor Jordie’s face, this game will just make you smile. Why?

Well, if you’re a Disney fan and know the characters and worlds, you’d be happy to know that everything you once saw as fantasy now literally is in your hands! Everything that you wanted to ever create or do with these worlds and characters can be created and destroyed at your will. Clearly, Disney fans of all ages will enjoy this game, but even if you don’t know the Disney universe like the back of your hand, that’s something not to fear!

What Disney Infinity aims to accomplish is for you to just have fun and be creative. John Lasseter put it best in saying that “Creativity is playing.” The core of Disney is that creativity that they’ve been able to achieve through playing – playing around with real stories and real character ideas and worlds that come from real people. The labor of those people have become memories for us and now, the magic-makers themselves have given us the opportunity to make our own Disney memories that’ll expand into “Infinity and beyond!”

Pricing has been broken down as follows:

The game has yet to be rated.

We’ll be sure to keep you updated on everything Disney Infinity as we approach the June launch. Our special thanks to our friends at D23 and our new friends at Disney Interactive/Avalanche Software for hosting us for this event.

In the meantime, be sure to follow DisneyExaminer on Facebook, Twitter, Tumblr, YouTube, and Instagram for more news on Disney Infinity as well as news from around the Disney world. Feel free to ask us any questions on our social media networks as well about Disney Infinity and we’ll do our best to answer them for you!

Thanks again for choosing DisneyExaminer for your Disney LIVE EVENTS coverage! Like our work? Your best compliment to us is your word of mouth! Please continue tell your friends and family about us…we can’t do it without you!