Welcome to DE’s Food and Flight Event! ~ Wrap-up of the Opening of Goofy’s Sky School and the Paradise Pier eateries!


There was certainly more food than flight this time around!

Last Friday brought with it lots of food and endurance! The blazing California sun was on summer mode and there was much at hand for us to do! So without any further adieu, here’s our wrap up of the new Paradise Pier eateries and Goofy’s Sky School!

We arrived to find no walls. 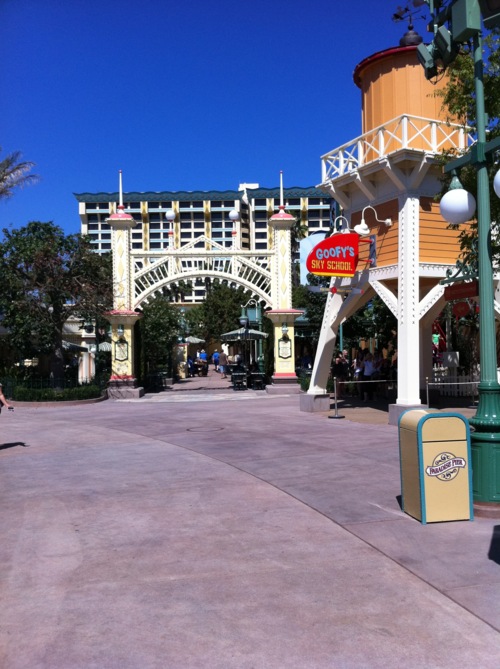 No walls…hard to believe that they once stood here for what felt like ages!

Yes indeed the walls were down and revealed a sight to behold! When Disney told us that this found complete this phase of the expansion in this area, we knew it had to be good! Not just the food, but the AREA. They sure made true on our expectations. This area is gorgeous! 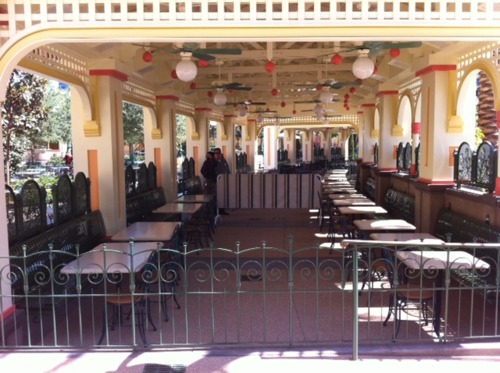 Also, the attention to detail is amazing as well! Little elements give off the feel that you’re really dining off the boardwalk, including the many bulbs that line the area. We’re sure it looks great at night – matching the outside look of the boardwalk games and shops! The music is also heard throughout the area played on hidden speakers. Think boardwalk games music…you might even hear a Main Street tune…

The area also features a stage where approriate bands play tunes of the time and tunes of our time in the style of that time. Does that make sense?! The band named Odyssey played on opening day and we find them a welcome addition to the area. Live entertainment while eating…cannot be that! 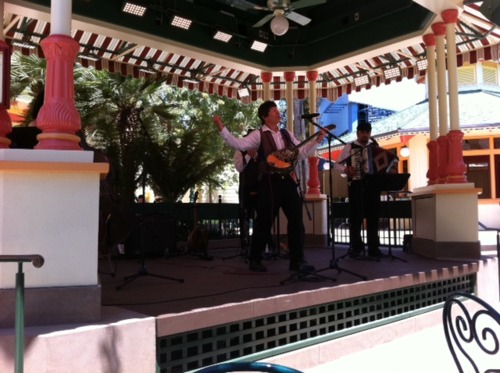 Odyssey – thanks for the great music and smiles!

The area also features a lot of trees…almost a park-like feel! And it couldn’t be better to have them scattered everywhere, especially during the California summers! 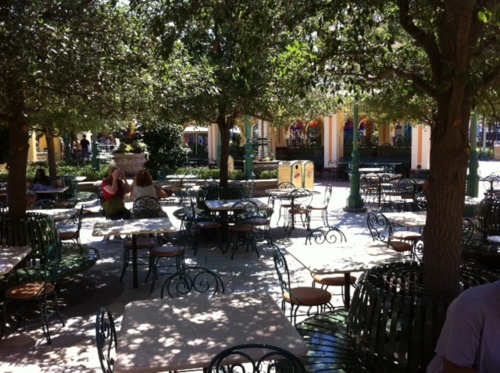 The area also features turn-of-the-century boardwalk “coney-island”esce music playing throughout via hidden speakers. There is also a stage where appropriate bands play tunes of the time! More on that later on as we take a listen to Odyssey, who played on opening day!

So enough with the seating already! How about the food?!

Yes, food! We came to the area a little area and a lot of suits (aka Disney executives) were wondering the area asking guests about their first impressions of the new area. We decided to wait it out in front of our first restaurant to review – Boardwalk Pizza and Pasta (BP&P)! 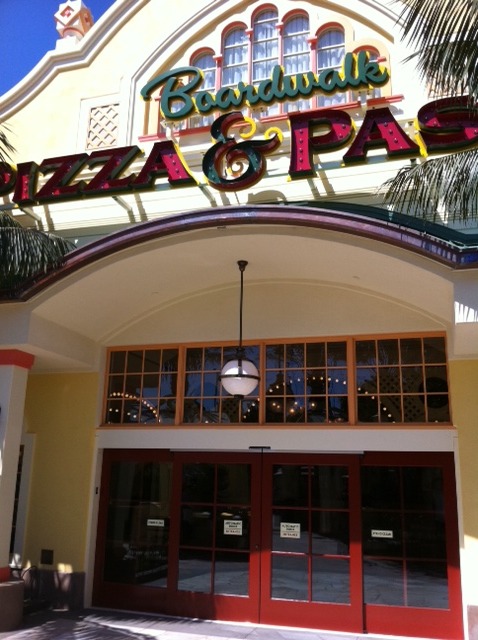 Another thing that we must note is that these eateries DO NOT OPEN for breakfast. They are only open for lunch and dinner service, beginning with lunch at 11AM. Oh! and just to get it out there too…YES, both restaurants accept AP discounts!

Once 11AM came along, a suit came and with the turn of a key unlocked the automatic glass sliding doors and a short countdown later, we were ushered into as the first guests of BP&P! Exciting!! – something to tell my grandkids for sure! 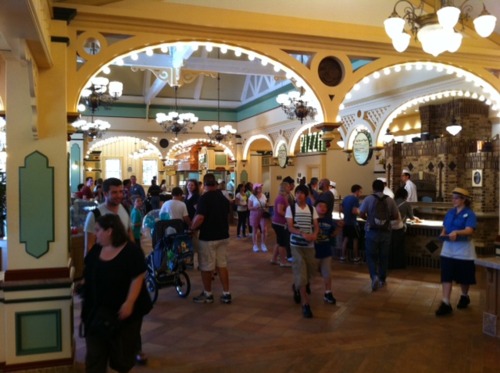 The area did get quite busy after it opened, but it didn’t stop us from taking various pictures and video from inside the air conditioned restaurant. Just like the theming outside in the seating area, Imagineers continued that boardwalk story inside with the various details that brought us into an Italian kitchen!

There were sausages hanging behind the counter, there were pictures of mama and papa on the “brick” oven that churned our pizzas. Even the floor was board. Theming was approriate, to say the least!

Now with this restaurant, it is divided like Plaza Inn at Disneyland on Main Street (you know, the fried chicken place?)

Each station, denoted by big bulb signs, serves a different offering – one for pasta, one for pizza, and one for salads. Guests just go to that station and pick from an already portioned and plated item they want and place it on their tray to take to the cashiers on the other side.

It’s for sure a great concept and very easy to get what you want. But like any pick and choose restaurants, it has its drawbacks that we’ll get to in a second.

We decided to belly up and try 2 pastas and 2 pizzas (no salads, folks – lettuce it lettuce and not for us carnivores to review!) 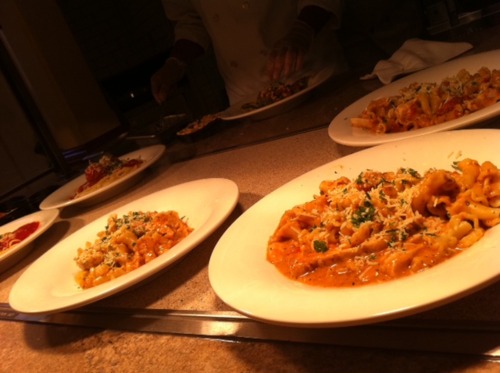 Pictured above – Pasta tossed with chicken in a sun-dried tomato cream sauce. $10.

We also tried a five-cheese ravioli with basil pesto and toasted pine nuts. Also for $10. 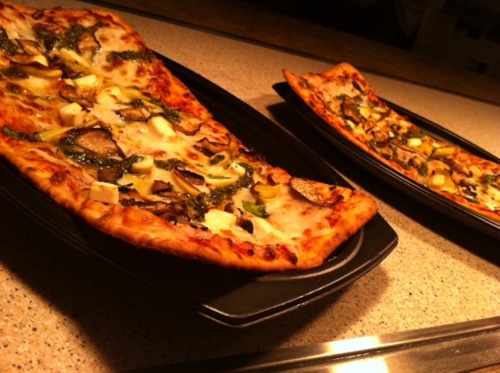 Pictured above – Flatbread pizza topped with Portobello mushroom and spinach. $9.

*For dessert, we tried the only two desserts offered at this eatery – a lemoncello cheesecake and espresso-topped chocolate cake. Both are offered at $5 each.

It was really hard to decided what exactly would be the staple to BP&P. Pizza has been done before at the Resort and when you really look at it, we knew that there would be some problems when it came to flatbread pizzas. Flatbread pizzas are usually served as an appitizer at most restaurants and at that $9 price point, we found it difficult to be satisfied by it. Going back to what I said about picking and choosing pre-portioned entrees, we found that the chicken on our BBQ chicken pizza was too dry, by the mere fact that it was not picked by guests immediately after cooking and that it sat for longer than expected. Sadly, this left both pizzas we tasted with the same verdict of not-too-good.

With that being said, we would say the staple of this restaurant would indeed be the pastas! We LOVED the chicken and sun-dried tomato offering and would call it THE pasta to have when dining here. In general, all pastas are actually TOSSED in front of you by the chefs behind the counter as well! This is some serious home cooking that you’ll kiss mama for! There’s just so much flavor packed into one bowl. It’ll be sure to delight any pasta lover!

The desserts equally tasted good, however we found that uniqueness triumphed in this category with the lemoncello cheesecake being our recommended choice! The chocolate cake…well was just chocolate cake.

We were quite full at the time we were finished with BP&P, but we knew we had to endure for the sake of this review, so it was off to Paradise Garden Grill! 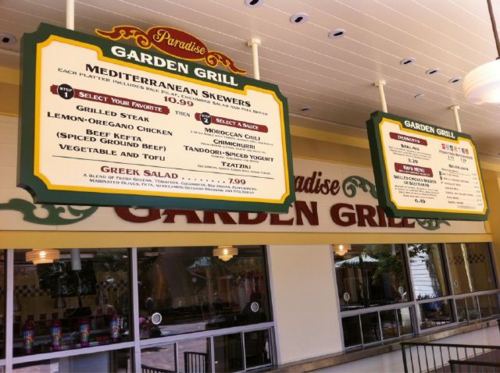 Disney I’m sure has decided to stick with their already popular and successful food service options and choices because just like immitating Plaza Inn for BP&P, Paradise Garden Grill (PGG) has copied the Lucky Fortune Cookery across the bay! Although the menu is quite limited, it does offer a healthier option of vegetables and meats – with a Mediterranean spin! 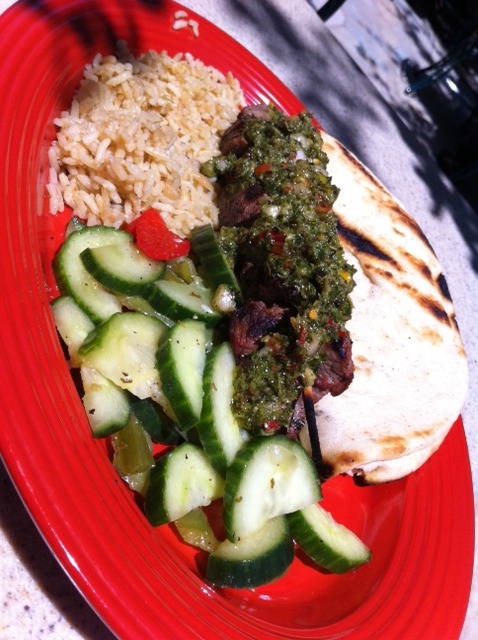 The staple to PGG would have to be their skewers/kabobs. Just like the Cookery, guests choose which type of meat they want on their skewer the choose a side “salsa” to go with it. The skewers are served with grilled pita bread, rice pilaf (with a kick!), and a cucumber salad. At almost $11, this is the most expensive offering between the two new restaurants!

They also feature some greek salads and of course a kids menu!

Although we did enjoy the skewers and how they really are GRILLED, it’s hard to place PGG. We do really respect the fact that they do serve higher quality and therefore higher priced items (and we really applaud Disney for that!). We love the taste of the steak that we had, as well as the rice pilaf, but at the end of the meal, we really weren’t craving for more. Maybe it’s because we had too much at BP&P? We just feel that we wouldn’t walk all the way down to Paradise Pier for the offerings here. Not to say that they food was BAD…we just cannot say that it was a place that was worth eating at or not. You be the judge on this one friends, but think of it as a mimic of Daphne’s Greek Cafe – pricey yet healthy.

Other things to note from our visit –

Bayside Brews has officially opened as well! It is the second place in DCA that serves alcohol, specifically draft beer straight from the tap! Readers over 21 should note that ID is required and are limited to only 2 drinks each! Don’t get your crazy on at Disneyland…it’s not the place! 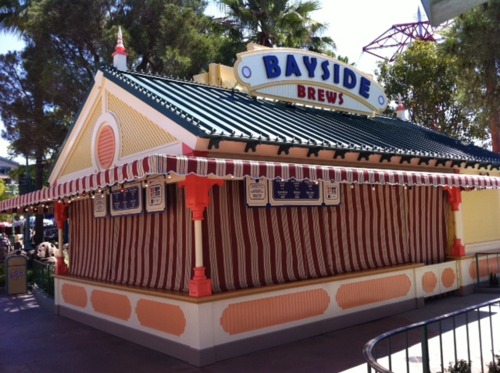 The brews not only serve beer, but pretzels as well! Stand opens around 12 Noon every day. 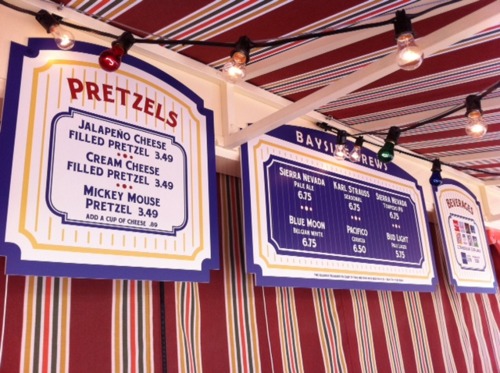 The menu and prices. Sorry, no kids menu here! 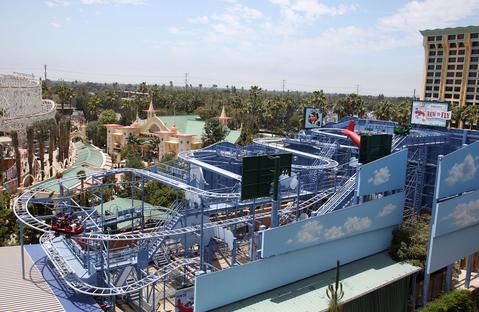 Overview of the flight – includes turbulence throughout! Photo © Disney

That’s it for the food folks…and for the flight lesson! We apologize that we were unable to make our LIVE stream fly-a-long at Goofy’s Sky School. By the time we were done reviewing the food at the eateries, we felt that if we rode, we’d get plane-sick and we had to leave early!

In any case, we would have to disagree and agree with our fellow critics on other blogs when it comes to this attraction! Yes, nothing has really been done to it when it comes to track, etc. but Imagineers has surely brought a revamped story that we really love! A lot of the staff loved watching the How-To shorts that Goofy gave us and the way they implemented that into this attraction is spot on! From the attraction queue detailing Goofy’s license to fly to just hearing Goofy spiel us with safety instructions – it just all works together for better!

At the same time, we would have to agree with our colleagues as well in that we feel that this indeed is NOT a favorite attraction of ours. We’re sure that Disney has the resources and time to create a more permanent attraction and we hope that they do in the future!

To say the least, Disney has definitely made a massive improvement to this area of food in DCA! We feel that guests will find not only the seating a plus, but also the food!

We spoke with Bob Clark, Operations Manager of Food and Beverage for DCA before we dug into our meals that day.

The objective of these new restaurants were simple – to serve high quality food in taste, quality, and presentation. – Bob Clark

Bob also pointed out that they wanted diversity, and as we see it now, DCA does indeed have pretty much every cuisine in the world inside its gates. “There’s something for everyone.”, Bob said.

We also agree, Bob! We love what you and the food and beverage team have done with just these two new eateries and look forward to what you have to bring us in Cars Land and hopefully the return of the Food and Wine Festival (wink, wink!) in 2012!