We’re pretty sure that the first thing that you think of when you think of Disney is either its theme parks and/or its movies. The company that Uncle Walt founded was meant to be one that’s sole duty was to entertain everyone and make them happy. We get that sense of entertainment whenever we watch a Disney film, listen to a Disney song, or step onto a Disney attraction at the theme parks…but if one were to tell you running was a new Disney way of entertainment and joy, what would you say?

Most people would say that you were nuts. Because, you know, it’s running.

But we aren’t nuts because such thing exists. We told you all about runDisney a few months ago and on the weekend of August 31, 2013, we got to experience first hand on what it was like to literally “run Disney.” We’ll be the first to tell you, though, that the concept behind runDisney and the experience of actually taking part in their events is nothing short of happiness and entertainment. That’s magic if we can say that and we hope we can further back that up by sharing our experiences of taking part in our first runDisney event(s) at the Disneyland Half Marathon Weekend! 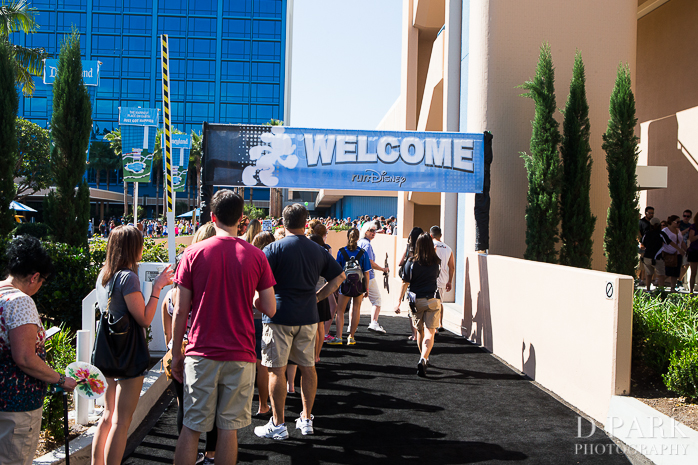 Registration began on Friday morning (August 31) at the Disneyland Hotel Convention Center. It was an unusually hotter than normal day at the Resort, but thousands of runners arrived early to pick up their required race materials. 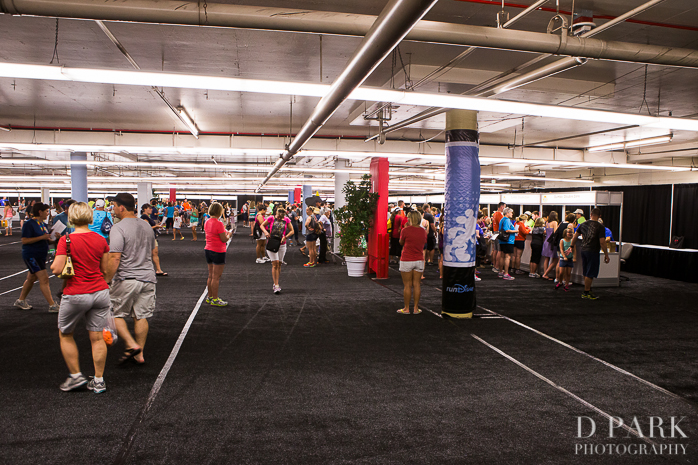 First you got your runners bibs… 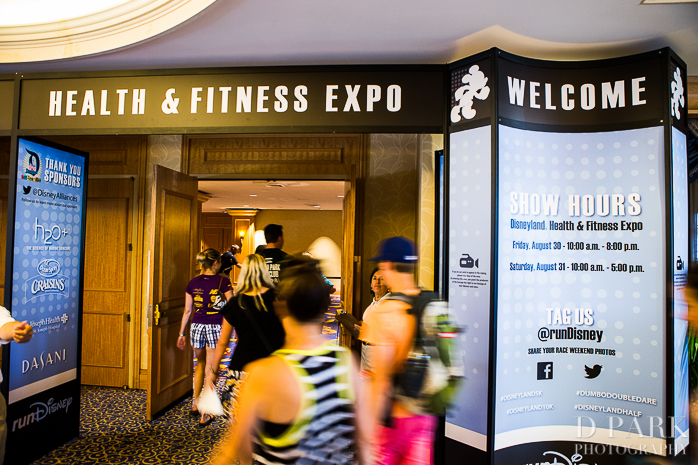 Then it’s off to the adjoining Health and Fitness Expo on the upper floor of the convention center to pick up your t-shirt. 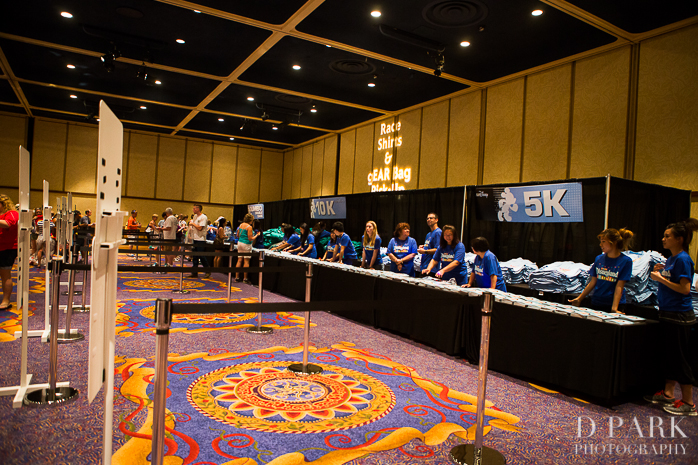 While you were there, you might as well have taken a look at the rest of what was going on at the Expo. The small 2-day Expo that is held at every runDisney event at Disneyland since its start brings with it many vendors, workshops, and special guests that hail from all over the health and fitness world to get runners ready for their races throughout the weekend. 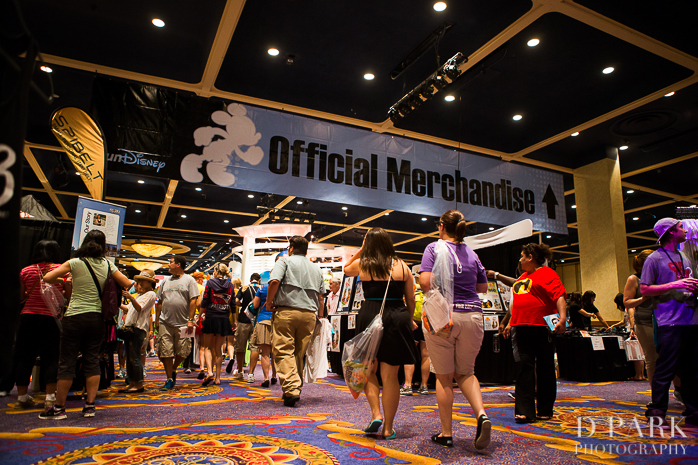 Can’t forget about the official runDisney merchandise like wine glasses and pins! 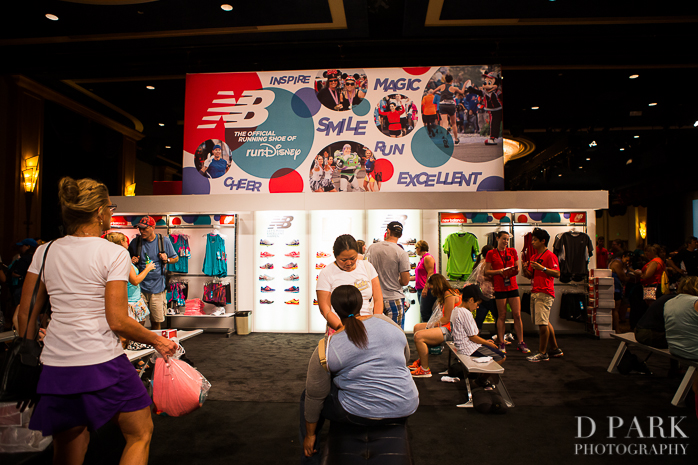 Remember that New Balance runDisney shoe we told you about? They had them on hand for purchase at the Expo. It was better than buying them at 200% markup on eBay! 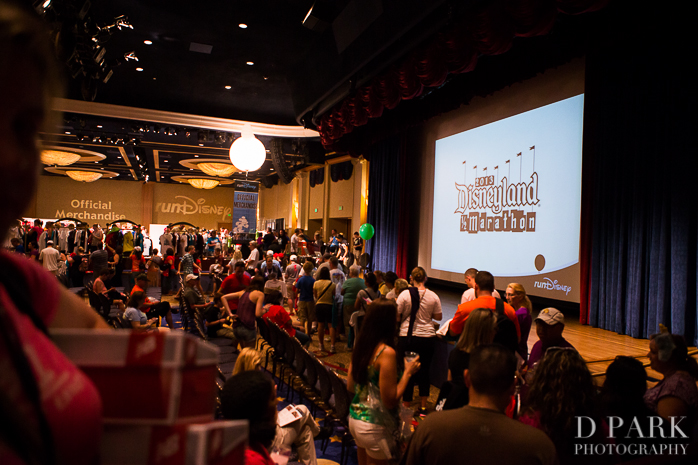 Throughout the Expo, special guests speakers took to the stage seen above to give tips of advice and encouragement to the runners. People like Tara Gidus (a renowned nutritionist) and Olympian Jeff Galloway gave some solid advice. Because you wouldn’t be too smart if you didn’t learn from the pros! 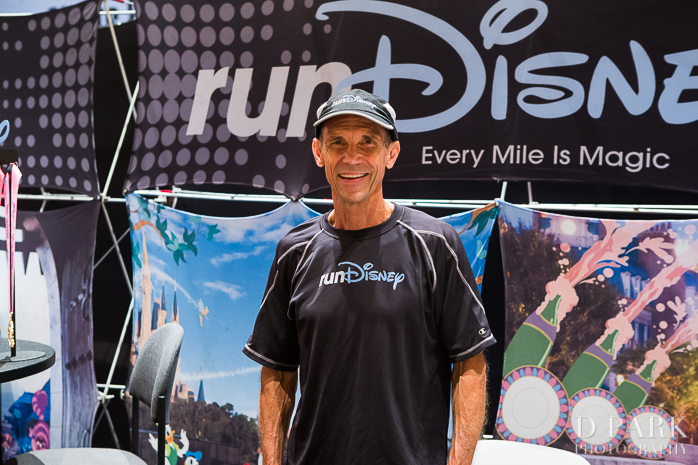 For some of us on team DisneyExaminer, Jeff’s methods and tips were so helpful in getting ready for this weekend. If you’re a beginning runner like most of us were, you’ll certainly benefit from his tips and advice as well! Be sure to check out his website for more information.

As we continued to wonder around the Expo, we began to see many of the runners dress up in Disney costumes. And yes, you’re allowed to dress up in a costume for any of these runDisney races! 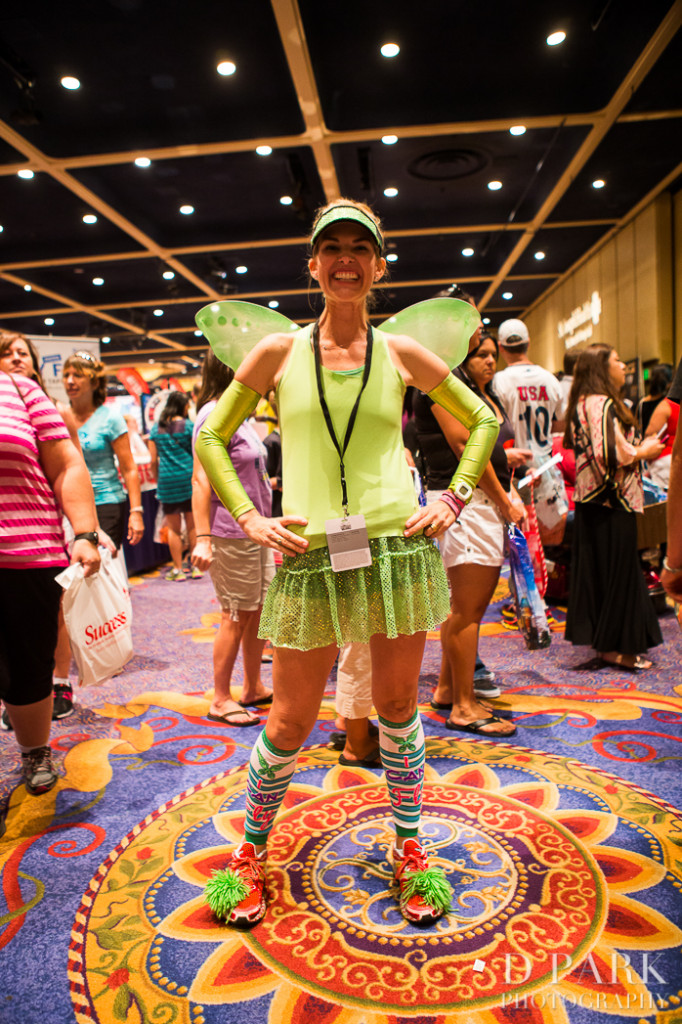 As the sun began to fall (and the temperature too), it was off for a quick dinner and then straight to bed for our 5 AM call time on Saturday morning for the first of our races – the 10K and the Diaper Dash.

And as if those asterisks represented time, our sleep felt like nothing! We were really too excited to sleep. But we did get rest and were ready to get this runDisney weekend started with running.

For the first races, our editor Jordie and Walt Disney Studios writer Lance took on the 10K. With peanut butter and banana as fuel, they began with the many other runners at the start on Disneyland Drive, just outside of the Downtown Disney District. The race started at 6:15 AM and just a little over an hour later, they finished!

Take a look at the small GoPro video they shot while on the course.

They said it was a great race and was something that they’d do again (except this time they’ll take on the Half Marathon next year)! But why, you ask especially for these new runners? That’s something you’ll have to wait for until the end of this report…just like arriving at the finish line! We have two more races to go through, you know!

Later that morning, our youngest DisneyExaminer took on his very first race as well! Our photographers David and Drexelle had their son Knightly (whom you know from our previous reports) take part in the Diaper Dash. What resulted was nothing short of fun and cuteness that no mature runner could compete with. 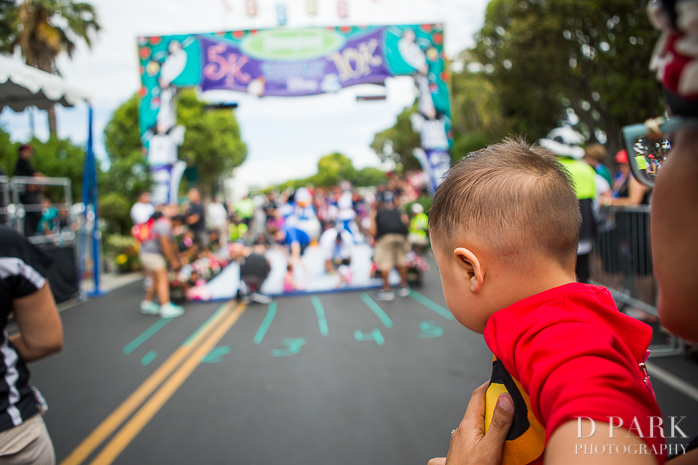 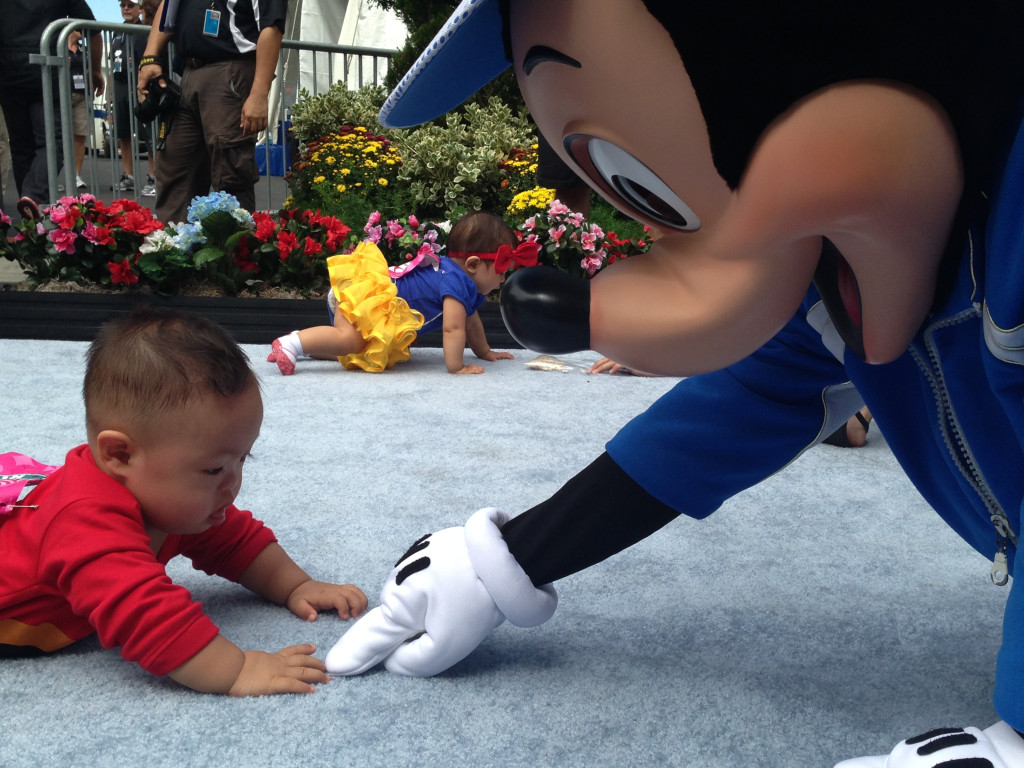 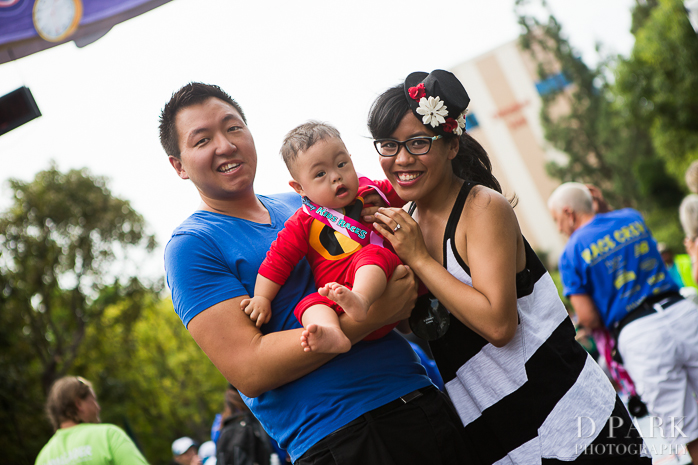 After Knightly’s race, it was back to the hotel for some showers, R&R, and food before a little celebratory party for the races so far at Disneyland later that evening. As tradition, runDisney holds a “Pasta In The Park” Party the night before the half marathon. It’s great way to eat up before race day, but it also is a great event to just meet fellow runners. 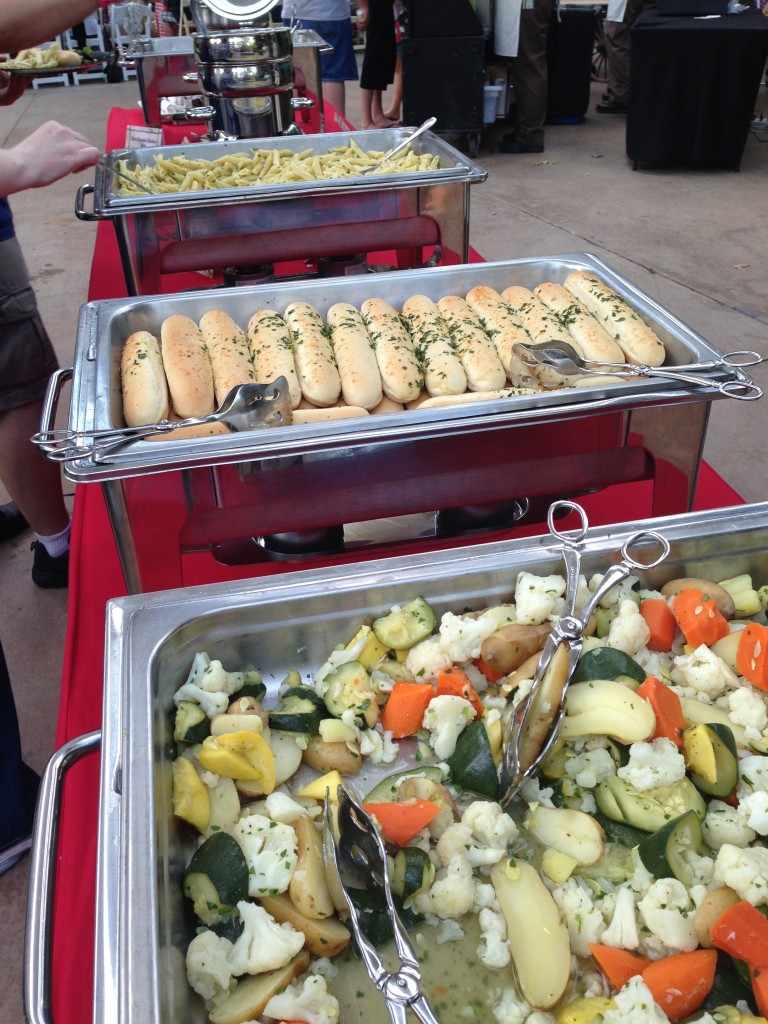 The menu this year was buffet-style steamed veggies, pasta and sauces, and some of the most delicious chicken we’ve tasted at Disneyland! There were also desserts, but what runner eats dessert? 😉

After dinner, it was time for some playtime in Disneyland. And chatting it up a bit with fellow runner Sean Astin. Samwise Gamgee, Rudy, whatever you may know him as, he is a terrific athlete with a terrific heart. Thanks Sean! 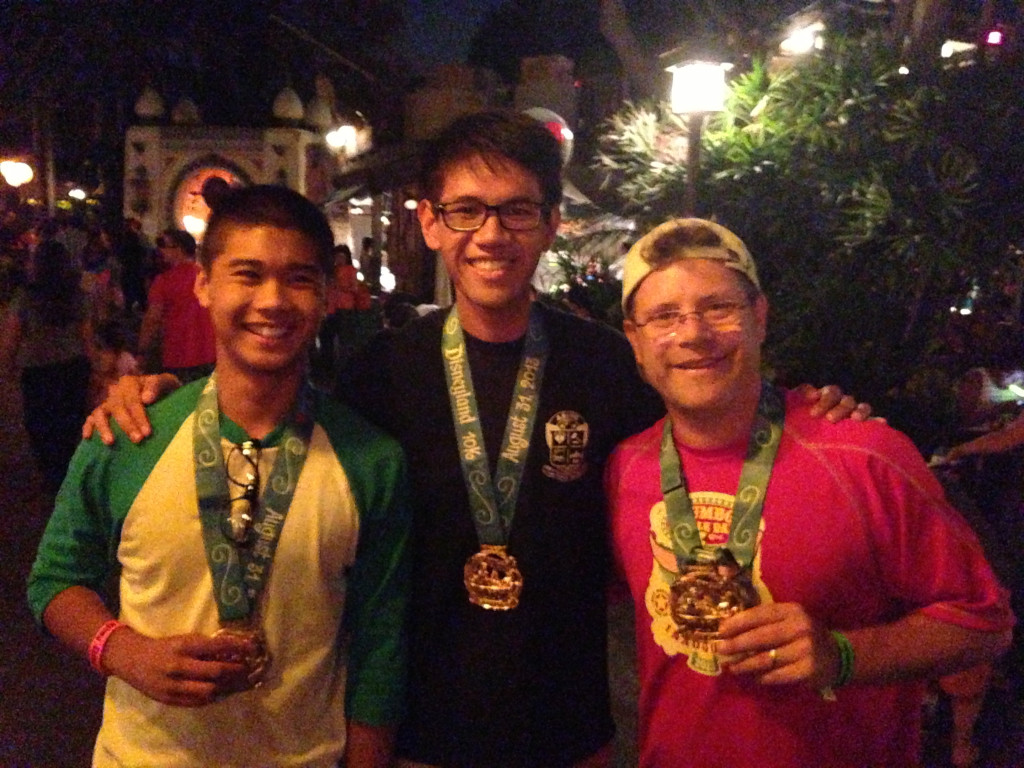 After some celebratory firework watching, it was back again to the hotel for a 5 AM call time to see our photographer take on the main event. 13.1 miles of the famed Disneyland Half Marathon.

In it’s 8th year, the Disneyland Half Marathon continues to be a favorite amongst seasoned runners and Disney fans alike. This year’s race sold out in record time and brought over 17,500 runners to the Resort that morning. 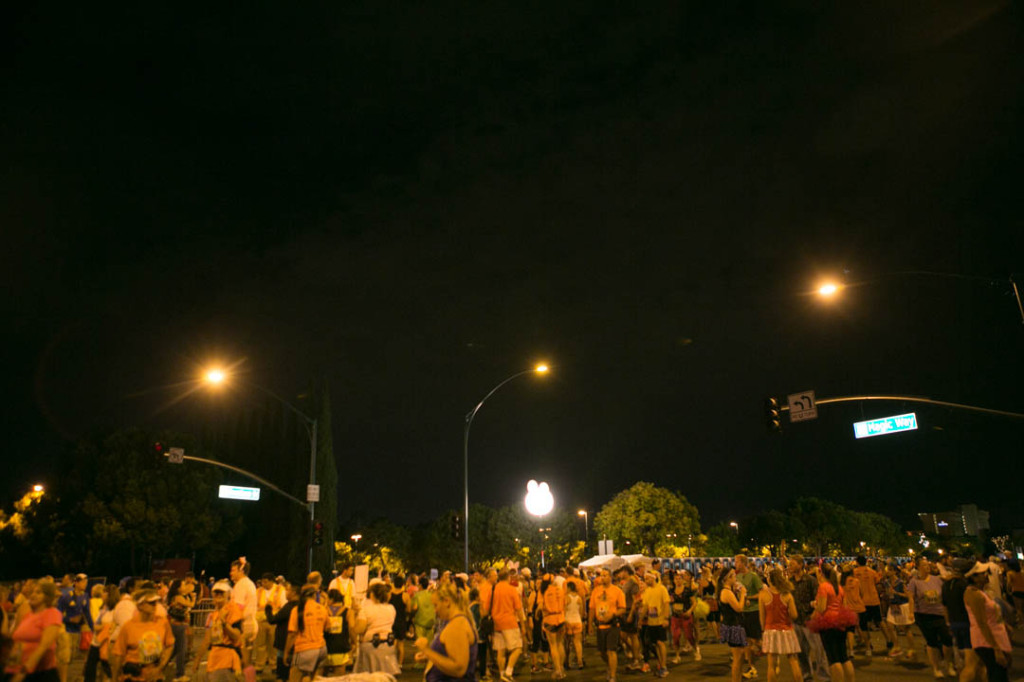 Our photographer David originally wanted to do the 10K, but since it sold out he decided to take on the half marathon instead and he did so with training and heart to support his son Knightly and the organization that helps him with his therapy.

The race began at 5:30 AM that morning, which was cooler than it was for the 10K runners the morning before…which was great because they were going to be doing double that distance! 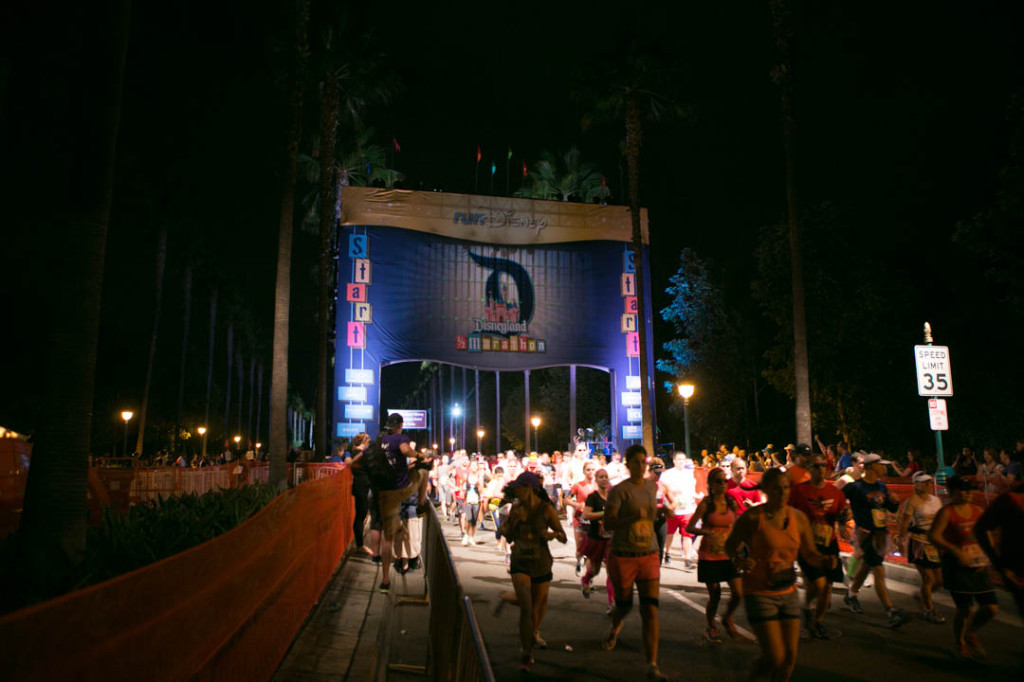 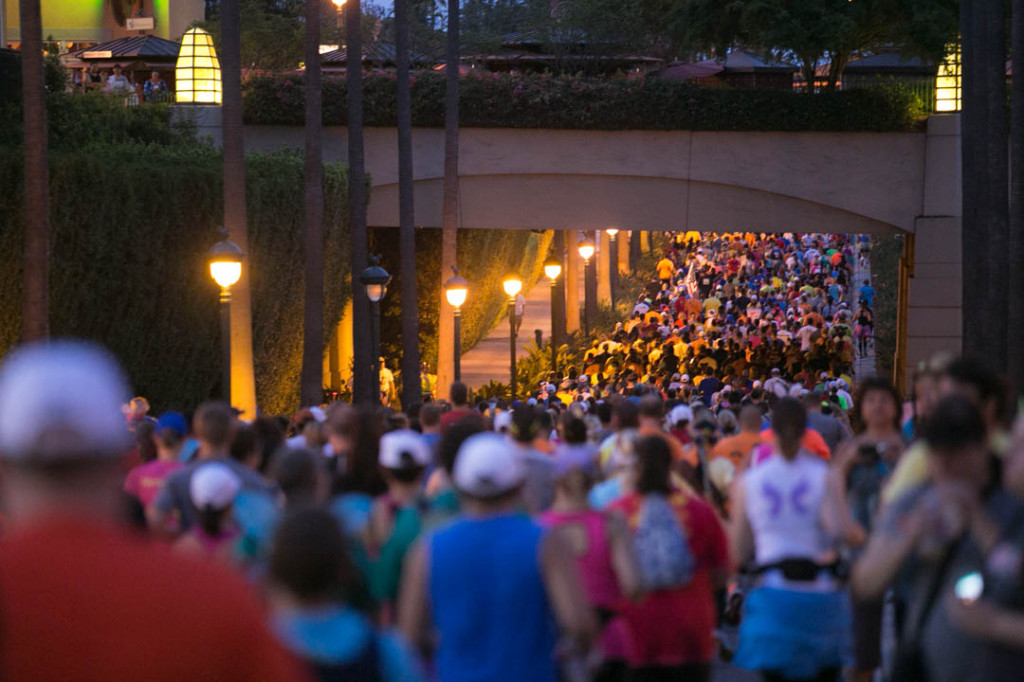 Just a little above the two hour mark, David made his way to the finish with Knightly in his arms. 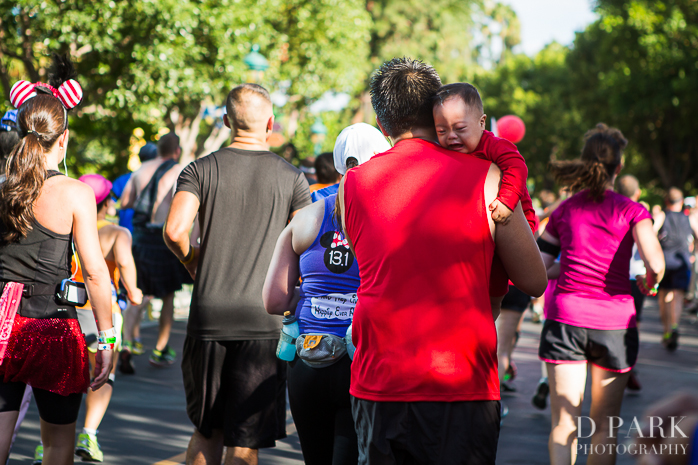 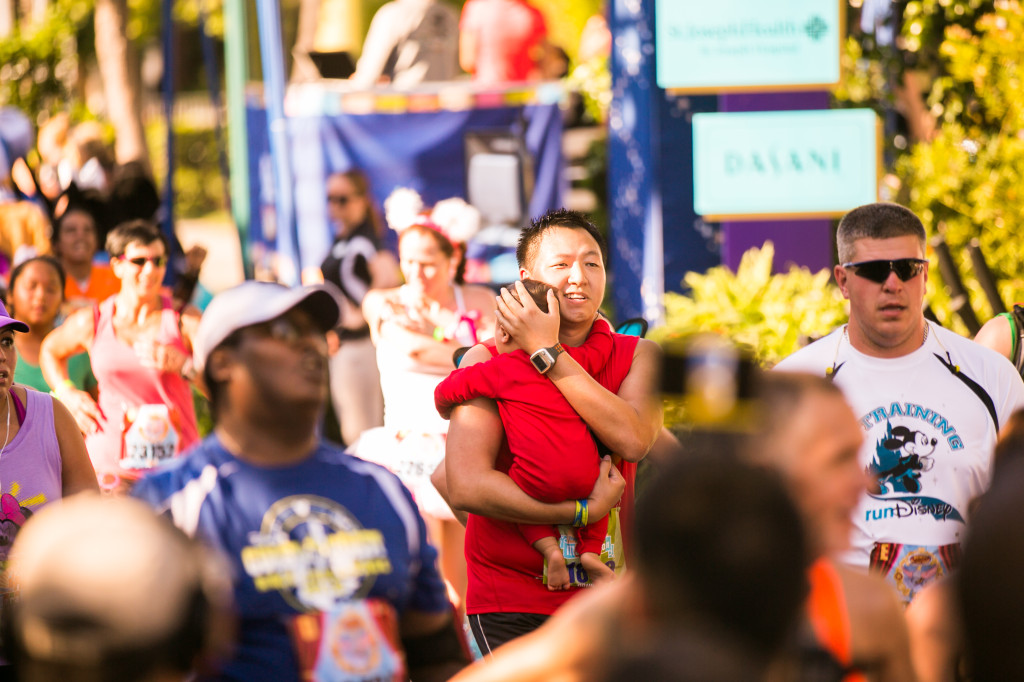 And it really was a dream come true for all of us that weekend. When we all signed up for these races a few months ago, it never really occurred to us how awesome these races would be. How awesome runDisney would be. We all were new runners motivated by the fact that we wanted to cover these runs…but then we thought about it.

Why not cover a run by running it?!

It was soon a question of if we could do those races and so training began. And as training began, our health and and physiques got better. Our way of life got better. When race weekend came, we came ready, but not really knowing what to expect.

But going back to our original statement at the beginning of this report – was runDisney and their races something to be considered entertainment? A new way to experience Disney magic? A way to experience the a happiness? Our answer is a complete yes and we only say that because we ran Disney.

Taking part in the “Happiest Races on Earth” and every cross of those race’s finish lines made that training worthwhile and even left us with a unnatural desire to register for more runDisney races in the future. And runDisney is ready for us and everyone else that wants to run these magical races as well with 4 new races on the way! But why? Why run Disney?

The pure joy that you get from training to finish line occurs because you know it was earned. It’s Disney magic if you “go the distance” and that feeling of accomplishment doesn’t get much more joyous than that. runDisney’s tagline is “Every mile is magic” and from what occurred over the weekend, we sure believe that tagline too.

Our special thanks to our friends at runDisney and the Disneyland Resort for hosting us and putting together such a wonderful event this year! We can’t wait for the next races…

More thanks to our photographers Russell Purificacion and Drexelle Park for capturing these magical mile moments.

Also, we’d like to thank our friends at the Hilton Anaheim for making sure that we had a room to rest and relax in before and after all that running!