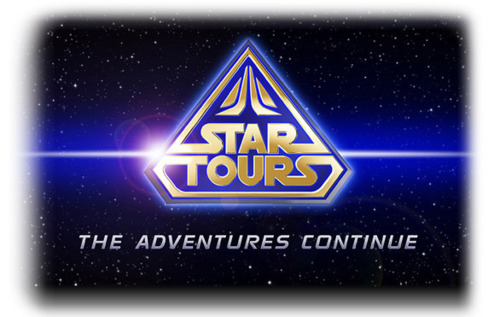 Welcome to DisneyExaminer’s Coverage of the Grand Opening of Star Tours : The Adventures Continue

I went to the Parks solo that day, so I ended trying getting to the Parks around 8:30 AM…you know…trying to beat the crowd.

Turns out that Disneyland opened one of it’s parking lots at 2AM that morning and guests started lining up shortly after. I got off the bus and… 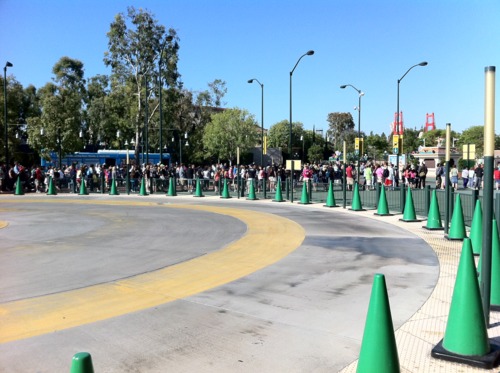 This line extended all the way down to Harbor Blvd…had some DisneyExaminer readers let me in line with them at the start of the line…thanks friends!

The park gates opened up a little before 9AM…of course there is the traditional rope drop officially opening the park at 9AM. I made my way to past the traffic and through the shops to bypass the stampede of people waiting to get in line for Star Tours. It was WEIRDLY SCARY! People were shoving and pushing…even little kids. So sad what people would do to ride a ride…

After the stampede down Main Street, I made my way into the “Single” file line to start the line for Star Tours. What I would end up going through would be beyond what I had ever seen on Main Street USA…a queue! Take a look below of some video I shot while in line.

Fortunately, I was able to ride the ride multiple times before opening day, so I jumped out of line to see if I could get my LIVE coverage going of the opening ceremony. I made my way around the Matterhorn and gathered with a few fans that made camp at the edge of the Tomorrowland Terrace Restaurant, near The Little Green Men Pin Shop. Although my view wasn’t so great, I was able to see what was going on and live Tweet my observations! Be sure to take a look! 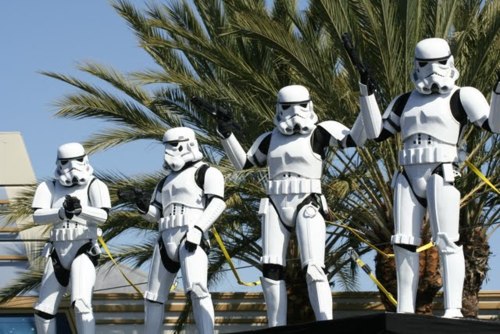 Disney was gracious enough to LIVE VIDEO STREAM the entire ceremony, which you can view below. 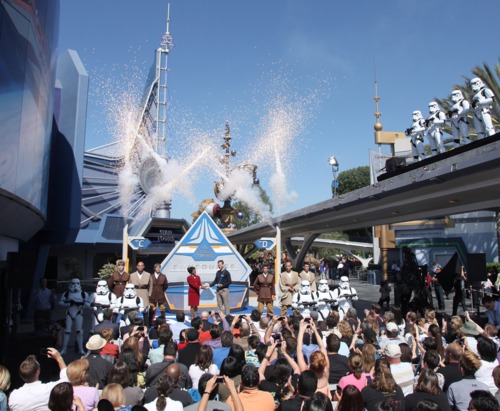 This attraction totally pulled a 180. While some do miss Pee-Wee  Rex in the cockpit and our same flights to Endor, we knew we needed something NEW. When the annoucement was made at the first D23 Expo, we were expecting a minor change. Maybe the announced new story, new location, new time – but SAME ride, where once was good enough.

May rolls around and BOOM. We were taken to lightspeed to another attraction OVERALL. Walt Disney Imagineers had teamed up with George Lucas and company again to re-imagineer this classic in Tomorrowland. We were able to get a preview of the attraction on May 20th for the Early Departure Private Event and were featured in our good friend’s video where he interviewed some of the first passengers as they disembarked to get their first reactions…

Mike and I are the last ones…

As we recommended at the end of that video, you ALL SHOULD RIDE IT. Yes it’s a new story, new location(S) – plural, new time period – but it’s NEVER the same ride twice! Disney designed the re-imagined attraction to randomize the locations your Starspeeder goes, along with your new pilot…

We won’t spoil anything for you here as always, but we do want to set the background on which this attraction takes place. Disney actually went back in time with this one. Where the original attraction took place toward the end of Episode 6, this new attraction puts you back BEFORE Episode 1 (hence the Starspeeder 1000), giving you the ability to fly to all sorts of destinations that were in Episodes 1-5. Yes, geeky.

But hey! For all of you who don’t know or didn’t watch the series from front to back, it’s perfectly ok! Don’t let the hype of having be story-ed around Star Wars make you afraid that you won’t get it or enjoy it less. Although the story is more broad, all that will fade away with the new effects and just the thrill of the flight.

The randomizations, you ask? Yes. Altogether, there are 50 possible combinations of where you’ll travel to each time you make that flight. Me and the team have ridden the attraction more than 10 times already and to be honest with you, we’ve been to almost every location. Some of our rides were the same or were the same locations but in different order. And that’s where the magic number of 50 comes in. You may be able to travel to all the new destinations, but the order in which they appear may change – making every flight different.

But enough of the stats on the ride. Go ahead and ride it yourself! Be warned though…If you want to experience the Force, long lines you will wait! The max wait time I’ve seen has been 240 minutes…and that was opening day! The lines still average around 120 minutes during the average weekday and nearly double during the weekend, so be sure to visit early in the day or get Fastpasses early as well.

Thanks for reading and enjoy your flight!