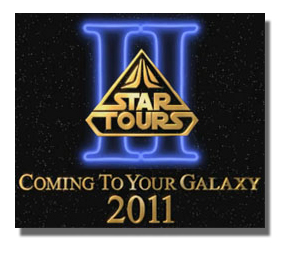 UPDATE : Our intel from this morning’s covert operation has been posted in the new section of DE called the Snippet!

We’ll be at Disneyland THIS Friday, May 20 at 3AM to wave goodbye and wish the Force upon the lucky guests that get an early departure to galaxies beyond via the Starspeeder 1000 departing from Disneyland’s Starport in Disney’s new adventure Star Tours : The Adventure Continues!

When those tourists return, we’ll be sure to get some first-hand accounts on what they saw. And hopefully, what we see to report back to you! This is a covert operation and may not go according to plan, so we’ll see where the Force takes us!

…In other words, we’ll be headed to Disneyland at 3AM in the morning THIS Friday, May 20, to see if we can ask some space travelers about what they expect before their “early departure”. We’ll also see if we can get some guest reactions after they return from galaxy hoping. And we also hope to ride the ride itself, even though we didn’t win the contest…