The director of the 15th Pixar film is a parent and, for him, this is a major driver of his creativity as a storyteller. His daughter was the inspiration behind Elie and the story of “Up”, the first Pixar film he created. It wouldn’t be that long until Elie would lead him into his next film.

“I noticed my daughter was growing up being a little less goofy and more quiet. That’s when she turned 11,” Pete Docter said at global press conference for Inside Out last Sunday. It was once again through his daughter that he had that creative epiphany:

“What if we had an 11-year-old girl who’s moved across the country, but she’ not the main character; she’s the setting because inside her head are emotions that deal with everyday life?”

That moment happened 4 years ago, but that still wasn’t the complete story. With help from Pixar veterans like storyboard artist Ronnie del Carmen and producer Jonas Rivera, the story began to take shape that would ultimately answer what was going through Elie Docter’s – and really, everyone’s – head as they grow up.

To do that, the film’s central characters are a personified version of what drives the way we act – our emotions. Like many other Pixar films, extensive research was done to make the story more believable. The five characters created represent the research done by famed American psychologist Paul Eckman, who served as an advisor to the film. “We arrived at five, mainly because it’s an odd number. If were to represent all 27 of Eckman’s named emotions…my brain was hurting writing for all of them!”, Docter said.

And so, Joy, Sadness, Anger, Fear, and Disgust were created to be the storytellers and as storytellers, they needed to have a voice. For that, Docter and Rivera wanted a cast who could perform the emotions they were cast as second-nature. At the same time, they didn’t want every scene to be in an emotional moment, so they turned to a cast that could pull off both the seriousness and lightheartedness of growing up.

They turned to comedians, many of whom appeared in NBC comedies, to fill that void. “A lot of the [script] lines on paper are sort of funny, but when you have a cast like ours bring them to life, it’s somehow so specific, wonderful, and fantastic,” said Docter. During the recording sessions with Amy Poehler, who plays Joy, Rivera compared the cast to performing an “SNL sketch, where the actors would be the prop house and would come in and make it read.” 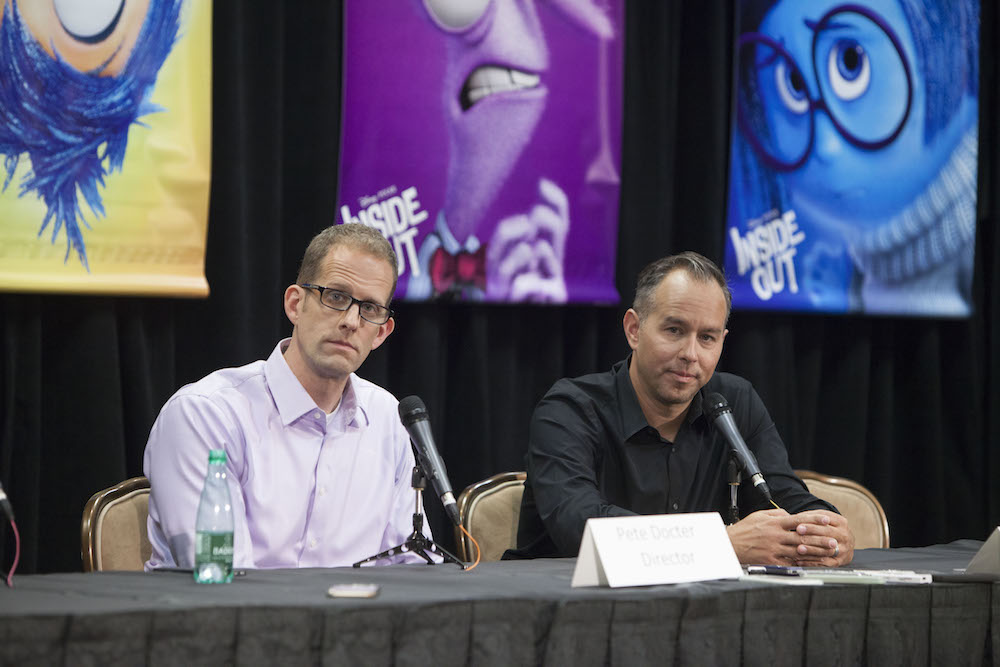 Even with all the funny moments, the concept of telling the story of what goes on inside your head is a bold and difficult one to tell. Even Pixar’s head creative John Lasseter said it would be hard when he first heard the pitch.

More specifically, the concepts shared in the film touch on the science of emotion and its relationship to memories. “One of the things that seems to happen to everyone is that even memories are affected by the way you feel today. So, if you’re walking around depressed and it’s a beautiful and sunny day out, you’re going to notice all the things that reinforce that emotion,” Docter said.

Although concepts like that will be the crux of the film’s story, story strategies and creative decisions were made to make the film enjoyable without too much thought. Rivera said, “we didn’t want it to be too science fiction. We worked really hard to make it whimsical and fun, like the mind of a little girl.”

Audiences will get to see inside that mind of Riley Anderson, that little girl in which the whole story takes place. But Docter also wants you to see his family side through his little girl Elie, because although the film started with her, it ultimately was made for us, a family audience.

“The central theme of this film is coming together and finding the most important thing [in life] that I think everyone would agree on – our relationships with our family, with our friends,” he continued, saying that our emotions allow us to appreciate those relationships.

If you leave the theater feeling that sentiment, Docter and Rivera believe they’ve done their job of taking that feeling that can occasionally be inside, out.