From the studio and director that brought you High School Musical, Disney is bringing you a musically talented group of teenage misfits in their new movie “Descendants.” With great hair and wardrobes comes a fresh, new-faced cast with amazing dancing and singing talents. This fairy-tale musical has all the ingredients of a Disney Channel Original Movie hit!

Set in present day in an idyllic kingdom called Auradon, Descendants stars teens— Mal (Dove Cameron), Evie (Sofia Carson), Jay (Booboo Stewart) and Carlos (Cameron Boyce), as the children of Maleficent, the Evil Queen, Jafar, and Cruella De Vil, who have been imprisoned in Isle of the Lost, a forbidden island with all the other villains. They have been offered a chance of redemption and attend an elite prep school alongside the teenage offspring of Belle and Beast, Fairy Godmother, Cinderella, Sleeping Beauty and Mulan.

The villainous parents see this as an opportunity to use their children to carry out an evil plan that will finally free them from the island. Will these misfit teens follow in the footsteps of their wicked parents and carry out evil wishes? Descendants is a musical adventure comedy about teens searching for their identity, making new friendships, and challenging authority. 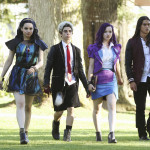 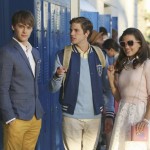 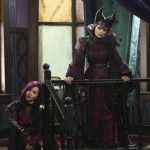 Mal – Fall in love with this purple haired star, who also happens to be the daughter of Maleficent. Popular and feared by the teens in Auradon and a natural-born leader, Mal is clever, sassy and edgy, naturally she takes charge of carrying out her mother’s evil plans. Conflicted by her destiny of inheriting her mother’s evil throne, Mal has a lot of difficult choices to make.

Evie – There is more to life than being the fairest of them all, but as the daughter of the Evil Queen, she uses her mother’s magic mirror to help herself and her villainous peers. Evie proves that there is much more than just a pretty face, that beauty can also be intelligence, and that it does, however, help to have a killer wardrobe.

Jay – As Jafar’s son, he is the best thief you will come across. He is used to working solo, but will be seen joining a sports team to help him learn how to be a team player.

Carlos – It hard not to find it humorous and ironic that the only child of Cruella De Vil is afraid of dogs. He has a short role in the plot but his savvy tech skills are helpful to the team when they are in trouble.

Prince Ben – The son of Belle and the Beast, Ben is getting ready to soon take over the throne, and his first proclamation is to offer a chance of redemption to the children of the villains who hate his parents. Unlike his peers, he does not fear the trouble-making teens and welcomes them as friends. He is the nice guy who might come off as being naïve for trusting the villains, but then again if it weren’t for him they would’ve never been given a chance to be good. He is a character with the least character development but at least he has a great voice and not too bad dance moves!

Jane – the daughter of the Fairy Godmother, she is quiet and awkwardly shy and is especially fearful of the villain kids and wary of their forbidden magic.  She goes through one of the biggest transformations throughout the movie so definitely look out for her.

Many other children of classic Disney films make appearances in this movie – look out for Aurora’s daughter Audrey, Mulan’s daughter Lonnie, and Dopey’s son Doug!

Other notable characters include the villainous parents, led by Maleficent, played by Kristen Chenowith. One cannot see the movie and not say how fantastic Kristin Chenoweth is. She wows us with her amazing voice, her charismatic personality, and humorous lines, and her make up and costume was amazing. All of the villain parents were honestly my favorite bunch in the movie because they have the best witty dialogue, and parents watching this film with their kids will love the adults in this film. 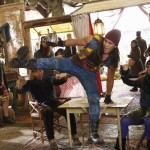 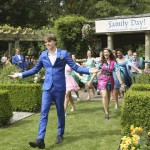 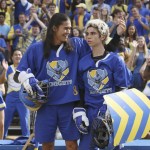 Of course this cannot be a Disney Channel movie without some singing and dancing involved! The Descendants has music that I guarantee you’ll be singing along to! Here are just a few of some of my favorite original tunes featured in the movie:

The first song performed, this upbeat energetic dance song introduces the four main characters, Mal, Evie, Carlos and Jay as the young rebels seen causing trouble through the streets of Isle of the Lost. It is during this musical number that we see these misfits as their wicked selves.

Kristin Chenoweth shines as the dark fairy! Even with an amazing talented cast like this no one can ever outshine this Broadway queen. There is never a dull moment when we hear this Mistress of All Evil sing as she steals every scene she is in.

“If Only” – Dove Cameron

My personal favorite “If Only” written by Glee’s Adam Anders. This beautiful ballad is performed by Mal, who we know wants to be just like her mother: pure evil, but in this scene we see that Mal does have a compassionate side to her.

“Be Our Guest” – Entire Cast

Led by the benevolent Prince Ben and his classmates, this song very much reminds me of Glee. This fun hip-hop a cappella version of Disney’s Beauty and the Beast song will be a promising favorite! 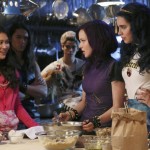 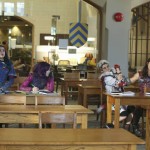 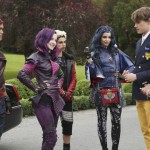 With shows like Once Upon a Time, it has become very popular now to see our favorite Disney characters come to life with interesting back stories, and not always just focusing on the ”happily ever after.” Descendants does just that, challenging the idea that not all villains are born to be bad.

Will the children of Disney’s most famous villains follow in their wicked parents’ footsteps and help them regain power? Or will they embrace their inner goodness and save the kingdom of Auradon? The story plot is very predictable and its moral lessons are a bit cliché, yet still this modern day Disney fairy-tale is playful and fun. It is mostly appealing to those below the age of 14 but even older viewers can appreciate the important message that the film carries.

The movie’s costumes, makeup and choreography are spot on and despite a few cringe-worthy lip syncing moments, the songs are clever and memorable and I don’t doubt that the soundtrack will be a big seller.

There’s no denying the tween audience will have a good time watching it! Check out the Descendants yourself to see the next generation of Disney heroes and villains come to life now on Disney Channel.

If you loved the Descendants check out brand new merchandise for the movie available now – and find out how you can enter to win a Descendants prize pack!