Over the past two years Double Fine Games, led by legendary game developer Tim Schaffer, has been reviving old Lucas Arts adventure games. Last year, I reviewed Grim Fandango, the first of this movement. Tim Schaffer’s games have such a unique style and humor to them, and I get excited by the chance to play a game from him. The Day of the Tentacle, the latest of those games, is a classic point and click adventure game from Lucas Arts.

The game’s premise is that you are trying to stop Purple Tentacle, an evil tentacle. You play as three different characters: Bernard, Hoagie, and Laverne. Purple Tentacle drank some sewage waste and you and your team along with your mentor, Dr. Edison, decide that you must go back into time and stop the sewage machine from polluting the river. As your gang goes back into time, using a glorified port-o-pottie called the Port-o-John, your machine breaks down and your gang splits up. Bernard stays in the present, while Hoagie is stuck 200 years into the past and Laverne is sent 200 years into the future. You play in three different points in time in order to try to fix the Port-o-John and stop Purple Tentacle.

Positive: updates to graphics and sound

The developers of this game did an amazing job bringing this game into the modern age. The game’s graphics and sound design have been tremendously improved from the original, which a 16-bit 2d art style, but is now remastered the game to look like a high definition cartoon. Additionally, the game’s sound track went from a MIDI sounding sound track to an orchestrated one. Both of these things  preserve the original game’s look and sound while making feel fresh and new.

What is cool about the game is that you can easily switch between the original and remastered version of the game on a whim. Doing this makes you appreciate the amount of effort and care that Double Fine went through.

What is enjoyed about this game is the humor. It is absolutely ridiculous. You encounter a diverse cast of the most electric people you can imagine, from the founding fathers to a tentacle’s pet human. You never know what to expect from this game. Over twenty years since the original game’s release, a lot of the jokes still hold up. It just shows the talent that Tim Schafer and his team have at creating interning and unique characters. Also, I noticed a few interesting easter eggs that reference a certain galaxy that is far far away. It is always fun when video game developers put these fun little nuggets for players to find. 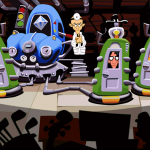 What was also interesting is that you have to coordinate with your team to help each other by sending each other items through the Port-O-John. This is interesting because changing events in the past will affect the future. So you must figure what needs to be accomplished in order to fix the time machine and stop purple tentacle. Even today, this idea still fresh and unique and it made for quite an interesting experience.

One of the most jarring things I found with this game was the voice acting. When you hear the characters talk they have this odd emotionless quality that, for whatever reason, comes off as off-putting. This game, however, was made in 1993 and the quality of voice acting in games and improved tremendously. As you play you adjust to the voice acting and it does not sound as bad, but it does take some adjusting too. You can tell that this game is from the 90s. Some of the characters, to the entire artstyle, are the epitome from that decade. It is not a bad thing, but it can prove to be off putting to some people. This game is a relic from its time.

With all of its interesting quirks, this game is an interesting experience that still feels fresh in today’s world. I am glad that Double Fine is continuing the trend of reviving these classic Lucas Arts adventure games. If you are a fan of the genre then this game is a must. Like Grim Fandango, this game is hard, requiring you to figure out the puzzles in order to forward the narrative. But if you are willing to stick it out then it is a rewarding experience which you will surely not regret.