This past weekend, the Muppets “took over” the Hollywood Bowl to put on a live version of their iconic TV show, classic songs and all.

With hosts Kermit the Frog, special line guest Bobby Moynihan (“Saturday Night Live”), and the Hollywood Bowl Orchestra, the creatures created by Jim Henson and humans alike performed songs and comedy sketches inspired by some of their TV performances. A new version of “Pigs In Space” was presented, along with the Muppet band Dr. Teeth and the Electric Mayhem performing some of their classic original songs.

The highlights of the two-act, two-hour show was toward the end, of course, with a live performance of “Mahna Mahna,” an emotional “Rainbow Connection” sing-a-long, and a fantastic fireworks finale.

It really was a full night of laughs and entertainment that was quite unique. For starters, the audiences at all the shows, including the one that I attended last Saturday, were a pretty even mix of adults and kids. The Hollywood Bowl typically has one or the other based on the acts that play the iconic venue, but it very much felt like families made it a point to come. 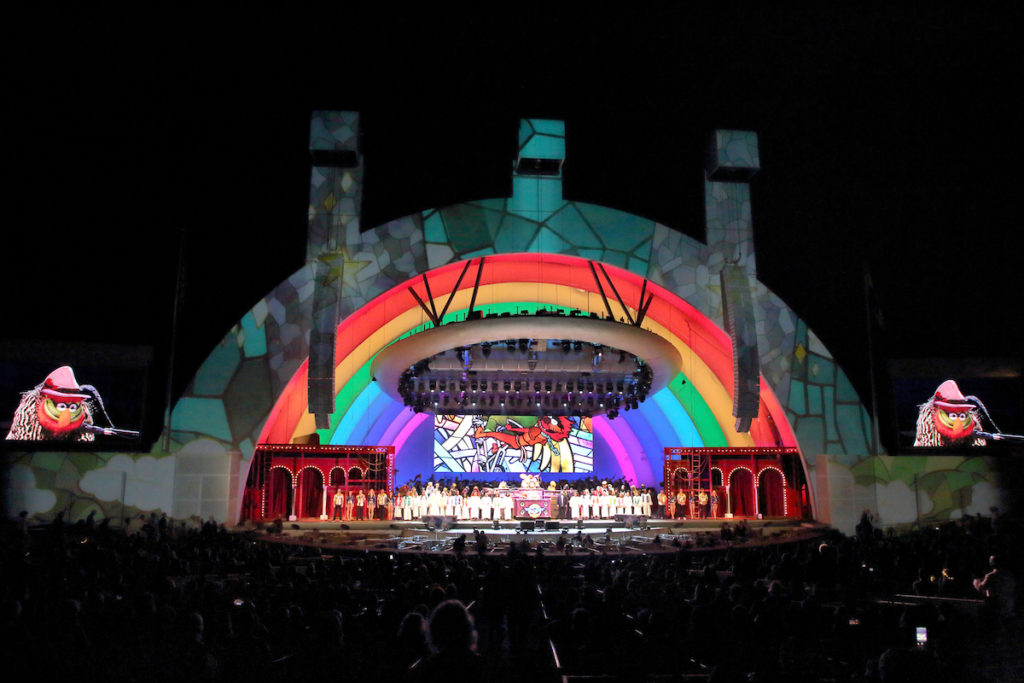 And while the obvious reason why families showed up is because the Muppets are kid-friendly, one can argue that it had more to do with the fact that The Muppets still mean something to today’s audiences. The Muppets themselves were dreamt up by Henson back in the 1950s, making them nearly as old as Disneyland Park in California! Little did they know that they would be bought by Disney five decades later for two reasons – they were marketable to families and more importantly, they meant something to audiences then.

The sold-out Hollywood Bowl concert with The Muppets revealed that even today, the creatures matter to a lot of people, and not just Disney fans. They present a friendly face to a funny inner spirit that seems like it can’t be replicated. ABC thought they had it when they wanted to create a more adult-centric Muppet Show for its 2015 primetime lineup, but audiences clearly wanted the classic Muppets and shows, resulting in the cancelation of the show shortly after two seasons.

But that doesn’t mean that the Muppets don’t matter to today’s audiences. They still do, even if those audiences knew nothing about the Muppets before, as kids or adults.

That relevancy is unique to any entertainment property that exists today. While that may mean more on the financial side to Disney in that audiences will gobble up more Muppet-helmed live events and potentially new shows, movies, and apps, let’s bask in the fact that Kermit and friends are here to stay.

Our special thanks to the LA Phil and Disney for allowing us to see the concert free of charge for this review!