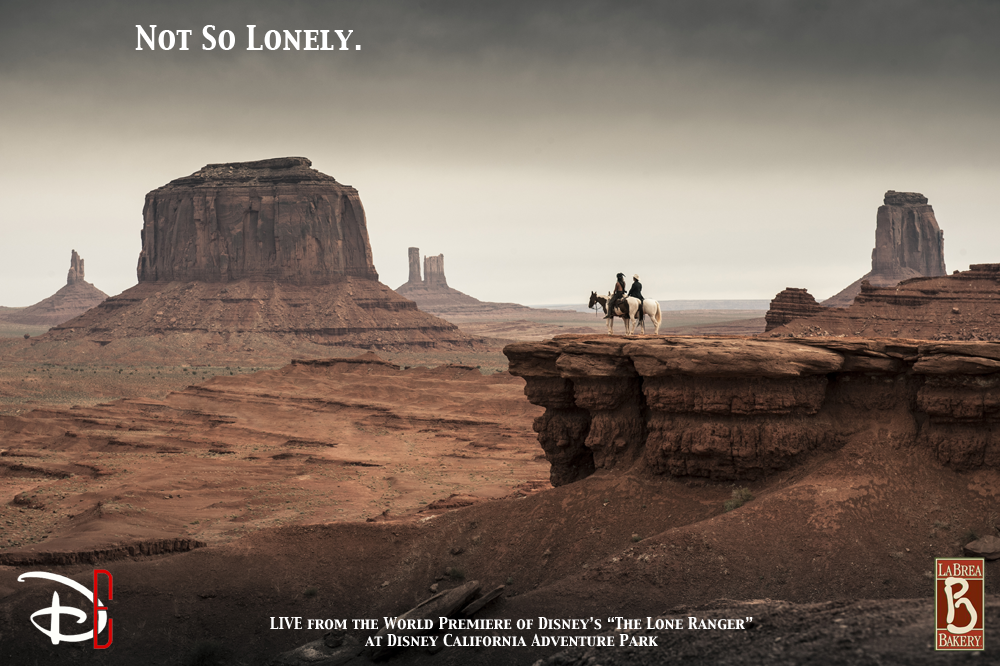 It had been a little over 3 years since we were given an opportunity like this, but we knew there would be a day where we would have an opportunity to do something like this again.

It was a simple email saying “This is an invitation to cover the press line at “The Lone Ranger” world premiere…” After hesitating (because it had been 3 years since our first premiere coverage for “Pirates of the Caribbean: On Stranger Tides”), we gladly accepted that invitation by RSVPing and that was that.

Why are we making a big deal out of this, you ask? Well, because we are humbled that our friends at The Walt Disney Studios have once again recognized that we are more than ready to cover these events because we loving serving our ever-growing amount of readers like you!

So a huge thank you to our friends at the Studios as well as you, our dear readers who love taking a closer look at Disney.

Another world premiere for another Disney movie covered like only DisneyExaminer could. Let’s get started then by taking our “train” to the train station at the Disneyland Resort.

[Our special thanks to DE Photographer Russell Purificacion from Rphotostudios and The Walt Disney Studios for providing the following photos from the event!

Our special thanks as well to La Brea Bakery for sponsoring our coverage!] 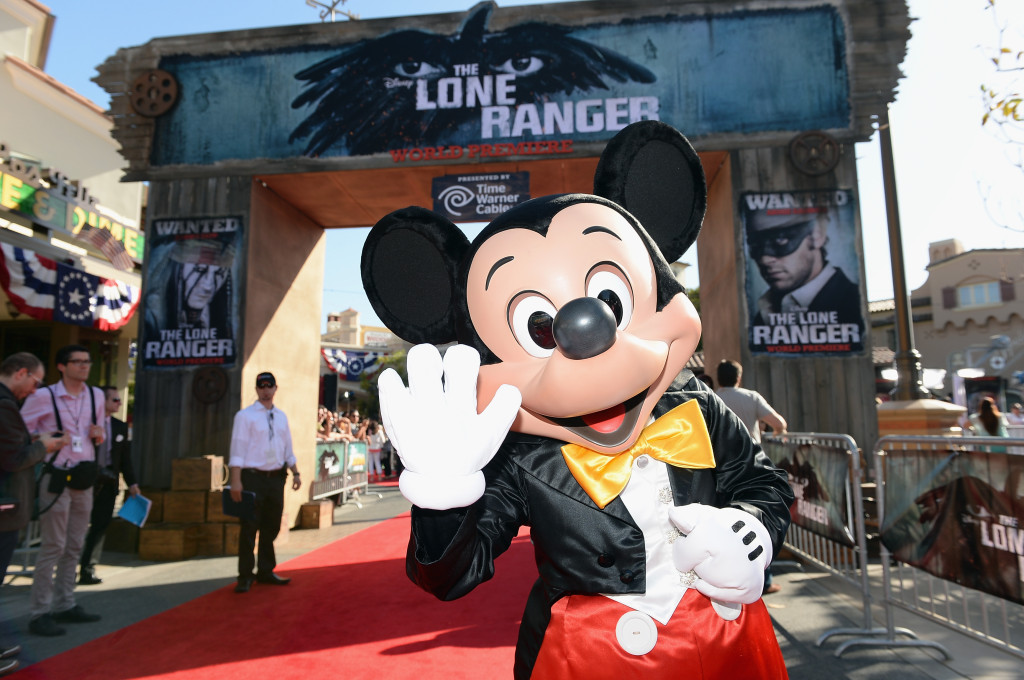 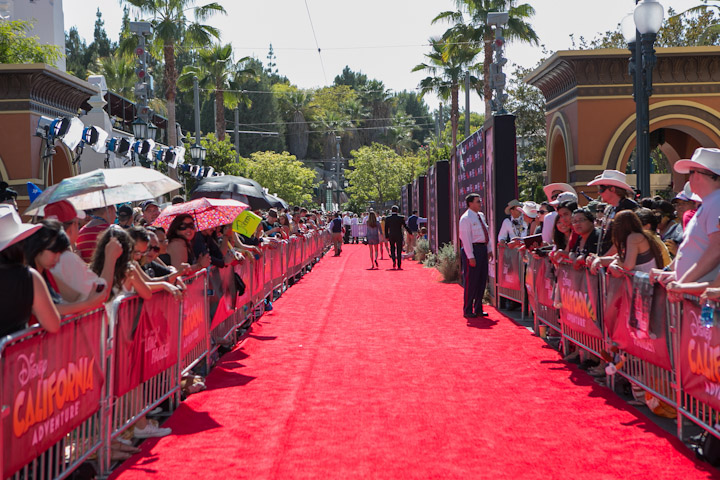 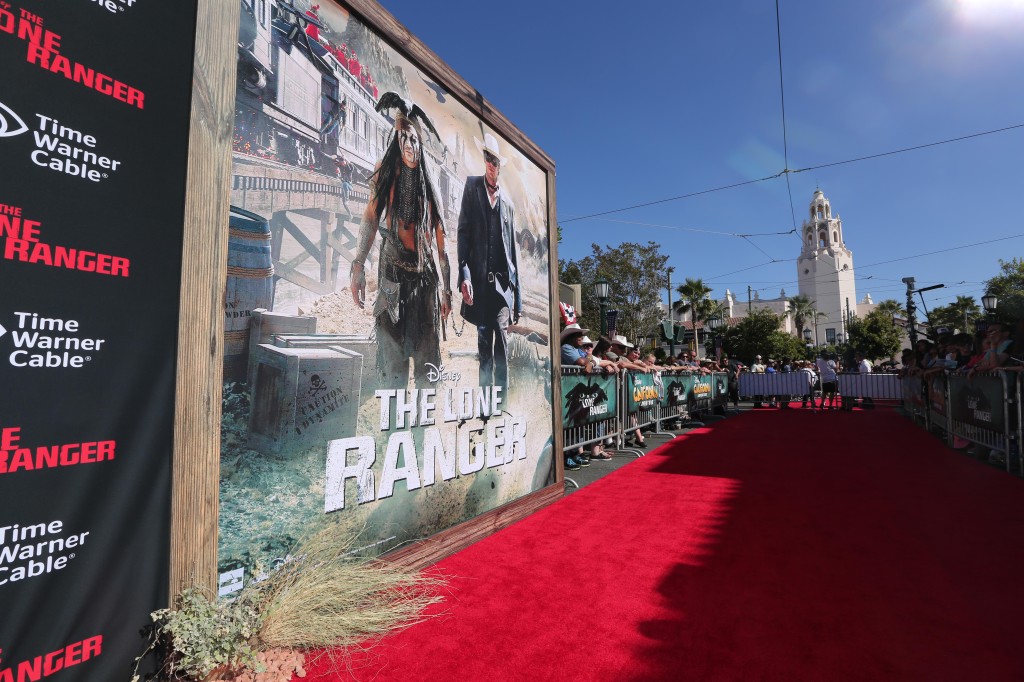 The red carpet itself made its way from the entrance of Disney California Adventure Park on Buena Vista Street, around Carthay Circle fountain, down Hollywood Blvd. in Hollywood Land and ended at the steps of the Hyperion Theater where the world premiere screening took place.

We arrived at the Resort around 2 PM where we parked at the hidden Pumbaa Parking Lot and shuttled to Disney California Adventure’s main entrance. It’s also worth mentioning that the premiere took place on the second official day of Summer and the sun was a-blazin’ on the red carpet and stayed a-blazin’ the entire time we were on the carpet. We knew it was going to be drain us, so we decided to stop by the media center in Stage 17 to grab a Subway sandwich (since Subway was a premiere sponsor), a lot of water, and the last shade we’d get for the next 4 hours. 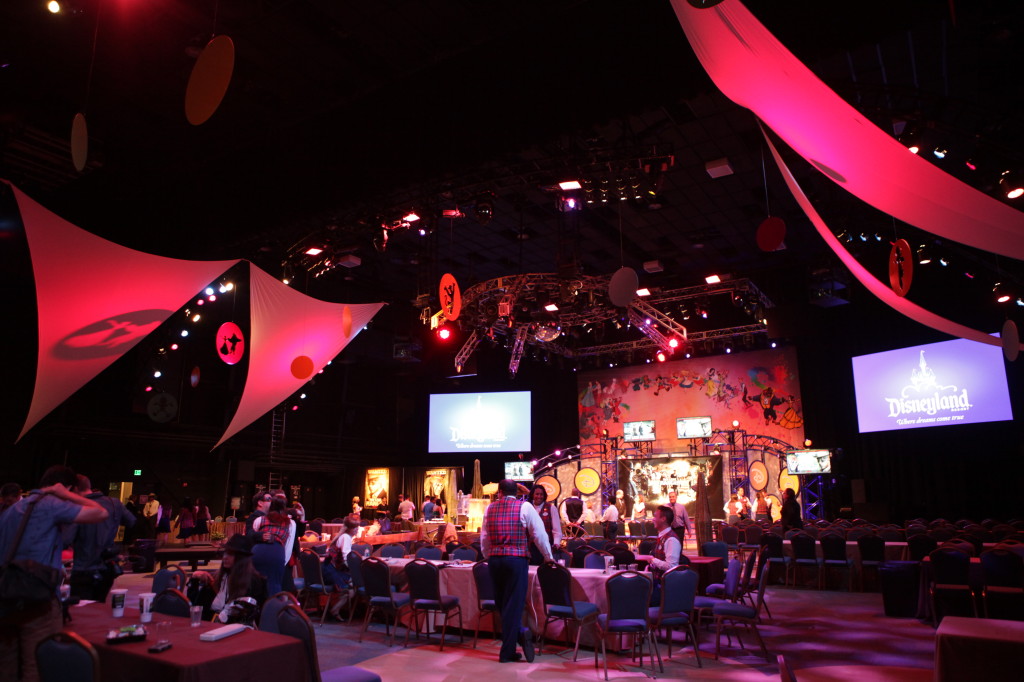 After a quick huddle, we stepped back into the sun and onto the carpet to see those stars. And at 5 PM, they started shining. And so did that sun! 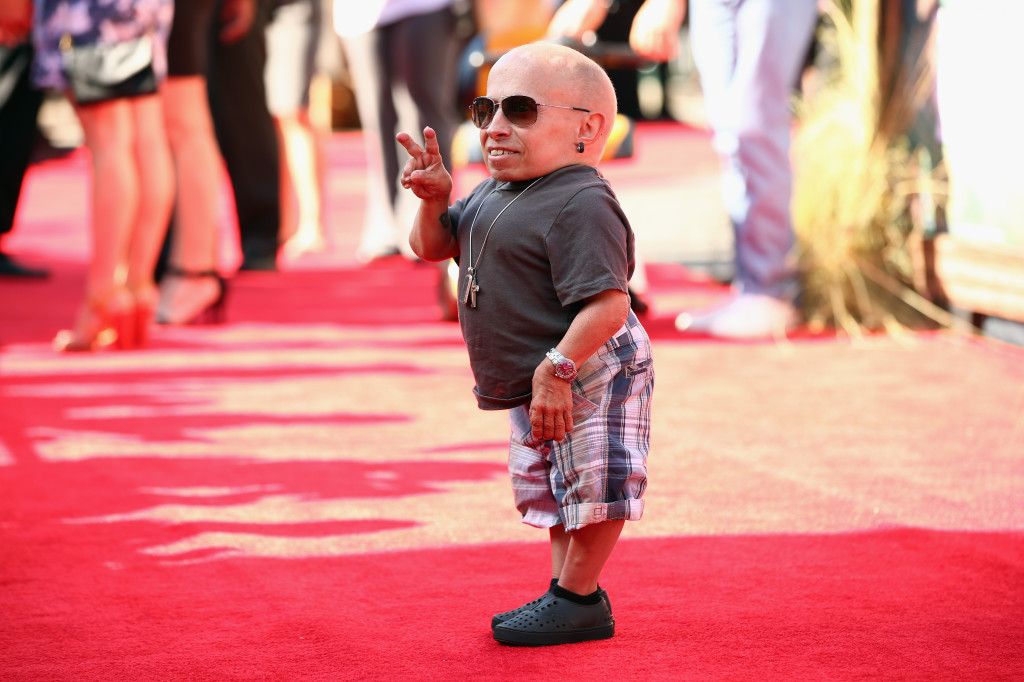 Verne Troyer (Mini-Me from the “Austin Powers” films) was one of the first ones down the carpet. 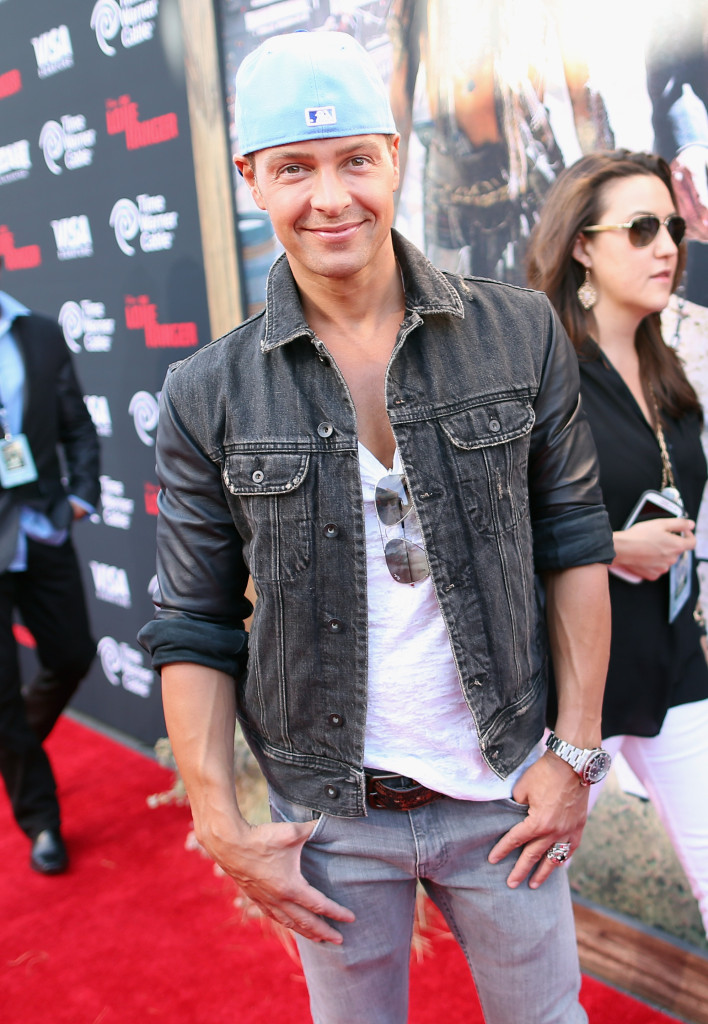 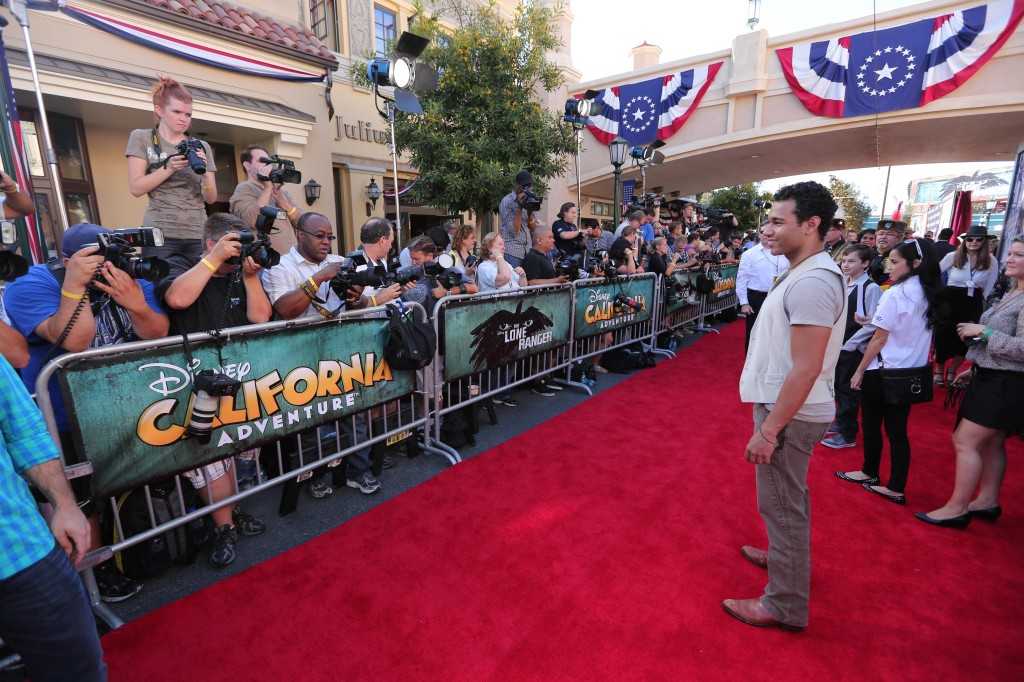 There were also a lot of Disney Channel stars who came down including Corbin Bleu was on hand with a his signature fro gone! 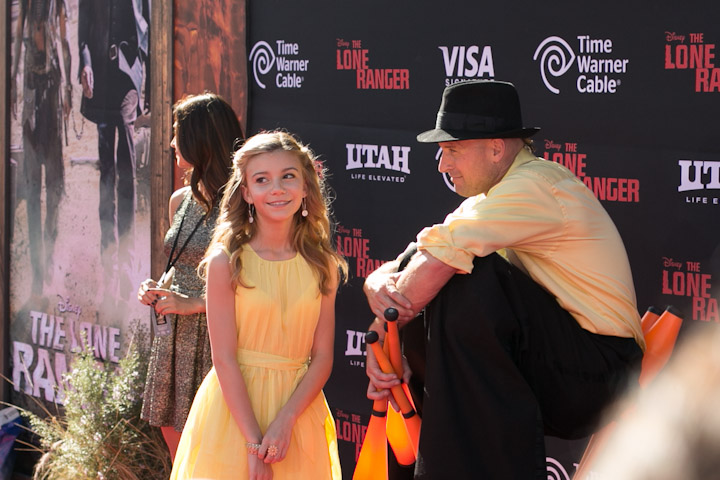 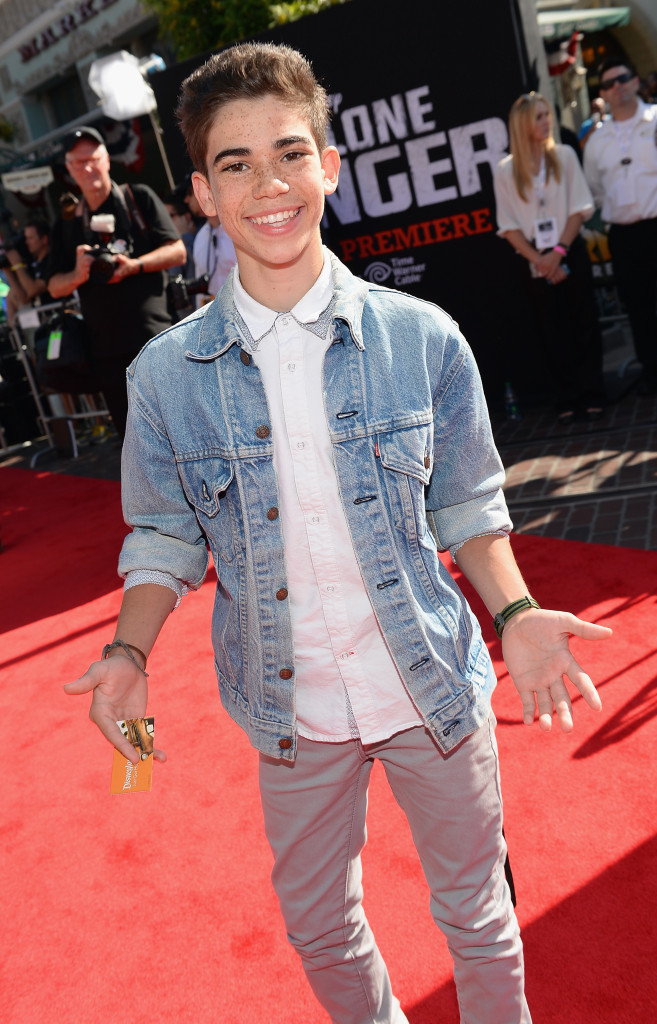 Actor Cameron Boyce (“Eagle Eye”, Disney Channel’s “Jessie”) was excited to be there.

If you’ve ever seen a red carpet before, you would know that although it looks quite spacious, it really isn’t especially when the all the celebrities, filmmakers, and VIP guests are coming in at the same time. There were many “traffic jams” on the carpet as well as personalities that didn’t want to chat with the media which all lead to missed interviews, but we did get to interview quite a few of those who were there!

Below you’ll find the videos of the people we got to chat with. They range from a baseball hall of famer to a “Jane” who was held up on a train in the movie and a lot more in between.

Sadly, Johnny Depp didn’t speak with the media too much and Armie Hammer just passed by, but we had a feeling that we’d see them again later on…

But we are more appreciative to those who did stop by and chat with us! You all are awesome.

And that was it! Those 3 hours in the blazin’ sun seemed like less than 30 minutes. It’s really a rush interviewing a whole bunch of people and it really humbles us to be able to talk to such talent. We’re glad that a majority of them enjoyed chatting with us too!

After everyone who was supposed to walk down the carpet made it down, we quickly made our way down the red carpet and toward the Hyperion Theater to see if we could chat with anybody else that we missed. And then we bumped into… 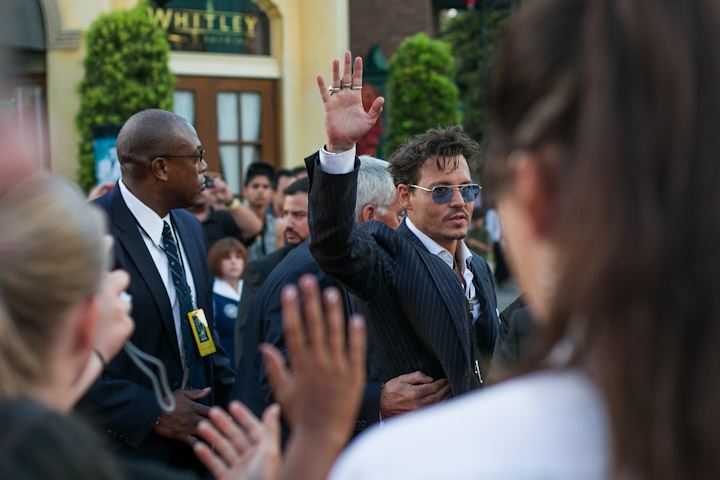 Johnny actually took his time to sign autographs, take pictures, and say hello to all the awaiting and adoring fans that waited all day to catch a glimpse of him. Nice, eh?

After they moved Tonto away, we made our way across the red carpet to say hello to another star (if not THE star of the film) Silver. Silver is the Lone Ranger/Armie Hammer’s horse and he is one nice looking steed! He wasn’t camera shy, so we ask to do an interview with him. The results were quite the “mouthful” as you’ll see in the video below.

After our chat with Silver, we were starting to feel the effects of tiredness, so we then decided to make our way back to the media center to post some photos and get some rest. Then Indian tribal music started pumping through the loudspeakers in the area.

We had no idea what it was, but as we approached the parked train that was used in the filming of the movie which was also on display that day, we saw a few cameras pointed on it as well as on the lighted stage. What could this be? 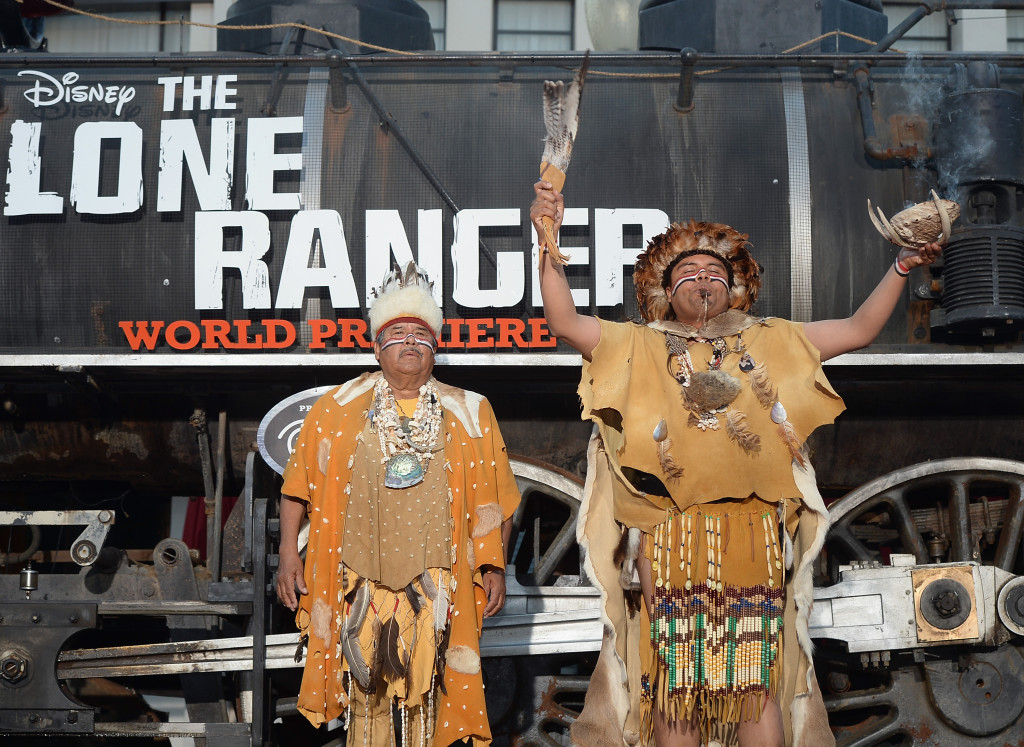 Members of an American Indian tribe walked on stage to offer up a prayer in celebration of the film and the start of the screening. 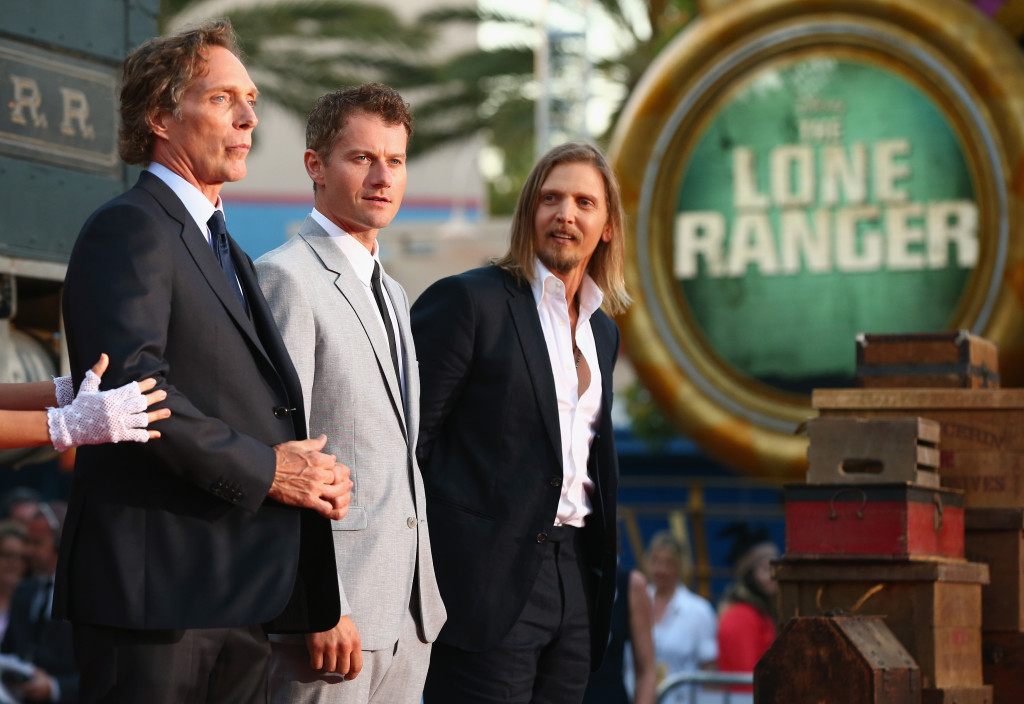 After the prayer, the stars and filmmakers made a surprise appearance on that same stage for one final photo-op. Here are (from L-R) William Fichtner [Butch Cavendish], James Badge Dale [Dan Reid], and Berry Pepper [Captain Jay Fuller] from the film. 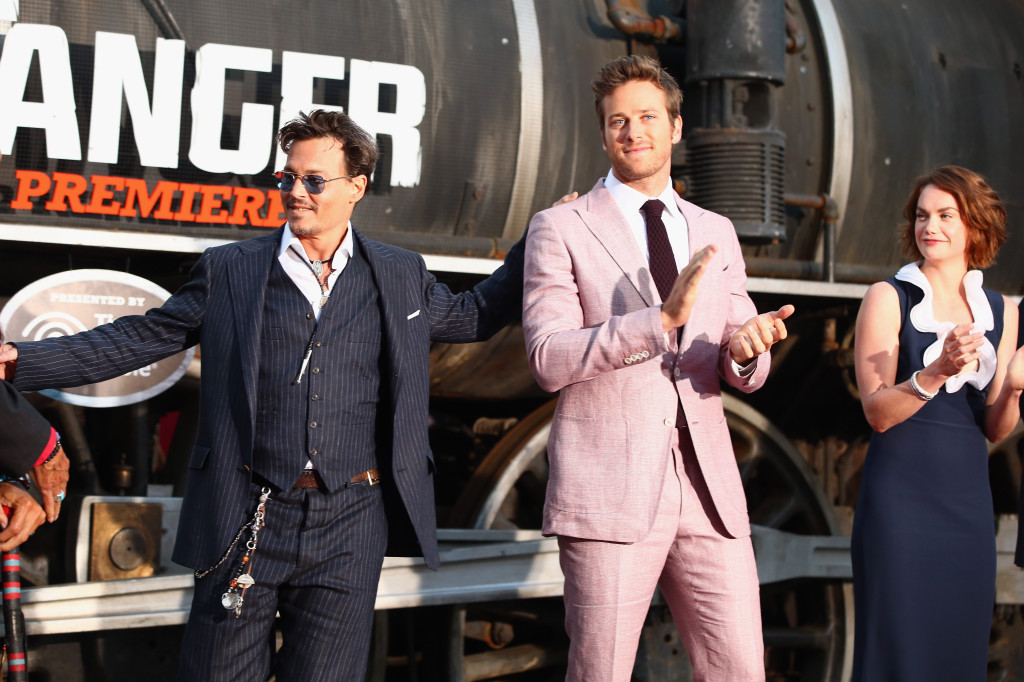 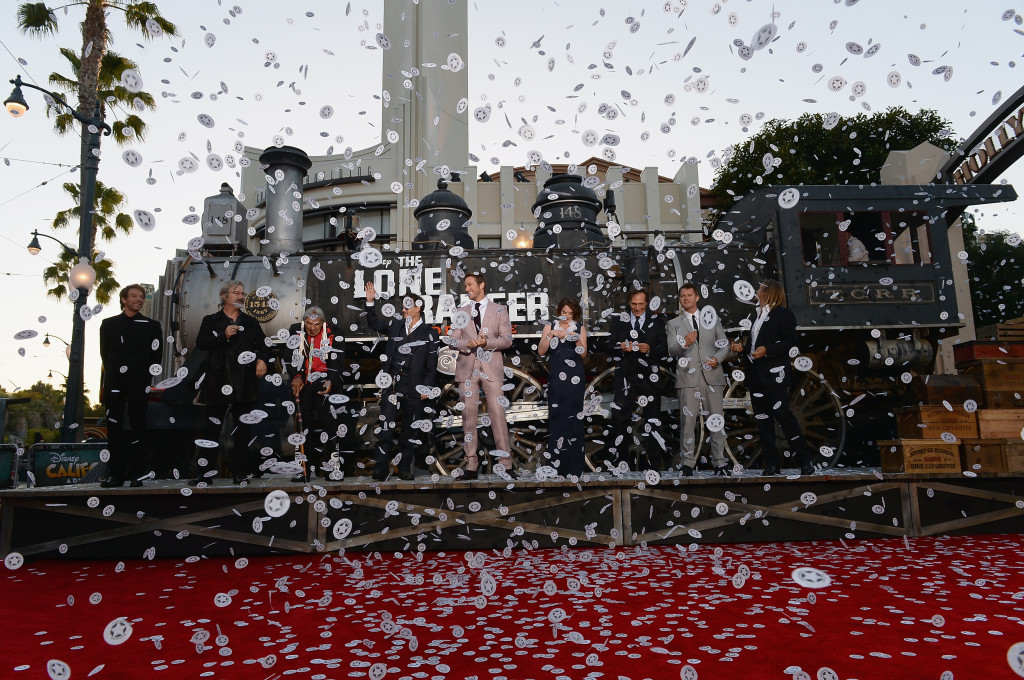 Confetti with the Texas Ranger badge on it ended the small and intimate ceremony. 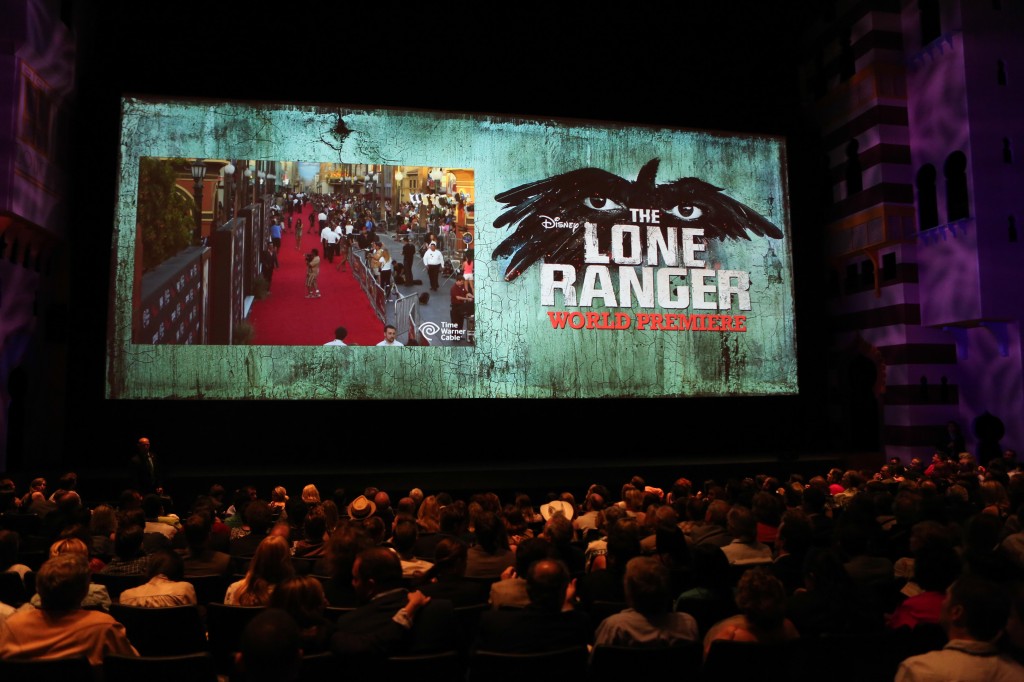 As the stars and filmmakers made their way off stage and into the theaters where the screenings were being held, we decided to call it for real this time and make our way back to the ranch/media center for some post-event work and R&R.

But that wasn’t the end of the Disney magic for the premiere attendees for the evening! They got an after party in Disney California Adventure Park that included… 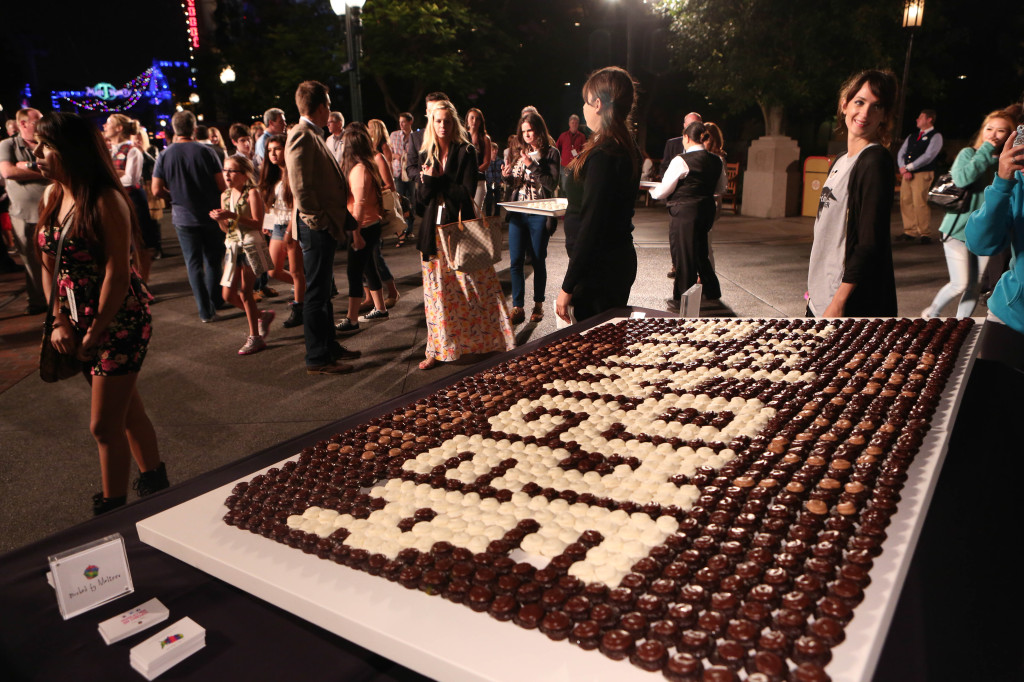 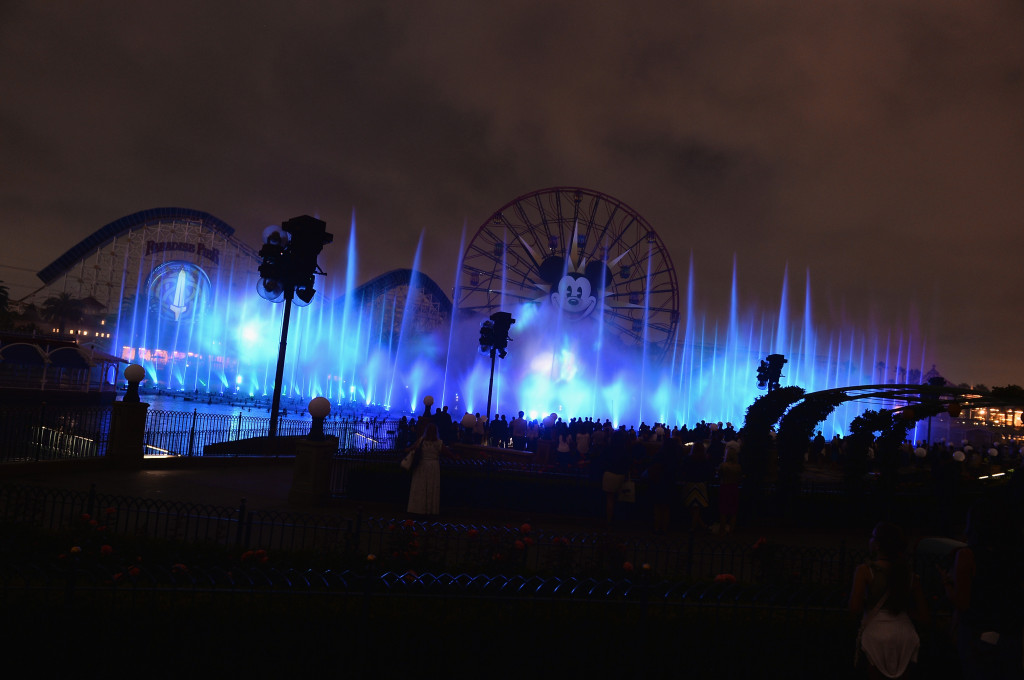 A private showing of “World of Color”… 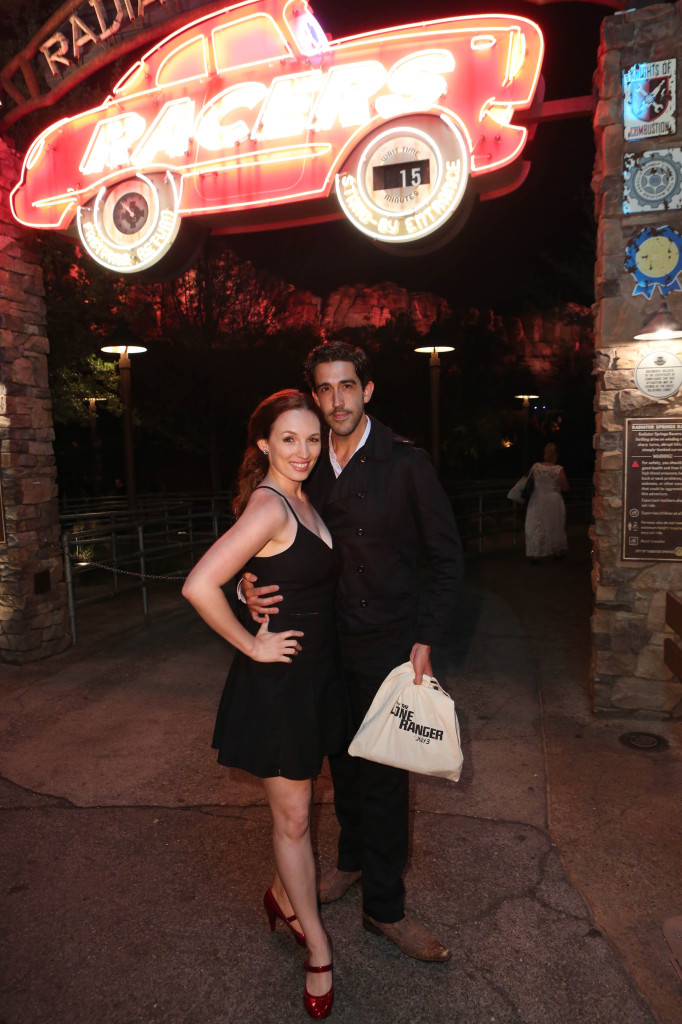 They sure do have the life, don’t they?

And that’s a wrap from Disney California Adventure Park, folks. Thanks to all of you who joined us on Facebook, Twitter, YouTube, and Instagram for our coverage of the world premiere of Disney’s “The Lone Ranger.” Be sure to check back on those social media networks for more pictures and videos from the event and see the movie when it rides its way into theaters on July 3.

We hope to be viewing the film very soon to give you all another one of our famous SPOILER-FREE reviews, so be sure to be on the lookout for that. 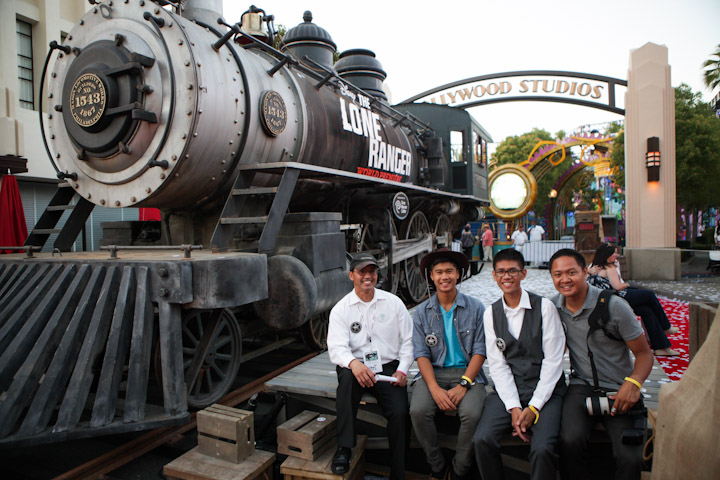 My special thanks again to the Walt Disney Studios for allowing us to be part of such a great event. It’s good to be back on the red carpet!

My thanks as well to the Disneyland Resort and Walt Disney Parks and Resorts for successfully making one of our favorite places in the world a more magical place for this premiere.

A shout-out to Rick (far left), a cast member from Disney’s Grand Californian Hotel and Spa who was our media host who treated us so well and has become a good friend. Thanks again, Rick!

And last but not least, my heartfelt thanks to Lance Cruzado and Russell Purificacion for not making me a “Lone” Ranger myself by being a talented, helpful, and encouraging group of individuals who I am also happy to call friends and family.

Thanks again for choosing DisneyExaminer for your Disney LIVE EVENTS coverage! Like our work? Your best compliment to us is your word of mouth! Please continue tell your friends and family about us…we can’t do it without you!