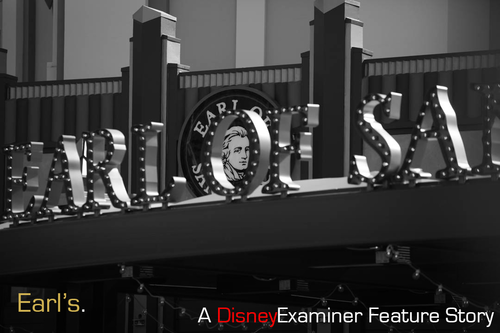 That being said, we love food.

We tend to get both right at our social gatherings, but it starts to get tricky for us once we start going outside for that food. Nevertheless, we try to find a place that brings those two “pluses” to the table.

One of those places that we’ve had a hard time trying to find such a restaurant has to be the Disneyland Resort! We do agree that food on Resort property is tasty and sometimes not even replicable, but we, just like you tourists and regulars, have always found it difficult trying to find a quality meal for a non-Resort price.

Well friends, we think we’ve found one of those hidden gems and its located in the Downtown Disney District.

That place is called Earl of Sandwich.

The quite fancy name comes from the guy who has been credited in creating the modern-day sandwich! John Montagu, the 4th Earl of Sandwich (a 17th-century title of a prominent member of a family from the town of Sandwich, Kent in England) pretty much had no time for a fancy meal because he commanded the mighty British Navy…and was a non-stop gambler!

With his hands “full”, he requested that his food (of meat) be put in between two pieces of bread and BAM. The name stuck to the man who had the idea and thus the sandwich was born.

Nearly 250 years later, the Montagu family has kept that passion for sandwiches and together with an investor who just happens to have the same last name as the family’s title, Earl of Sandwich has strived to create sandwiches and dining experiences that are worthy of its rather royal and historic roots through restaurants that are starting to appear all over the world!

The most recent location was opened up last Friday in the Downtown Disney District in California. We were honored to be one of the very few media outlets invited to celebrate the ribbon cutting and grand opening festivities. 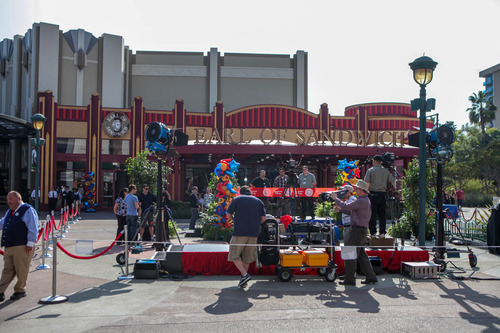 The little big media set up! 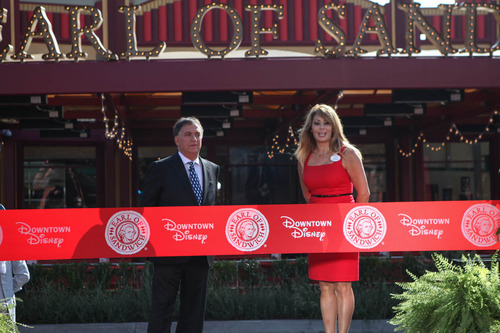 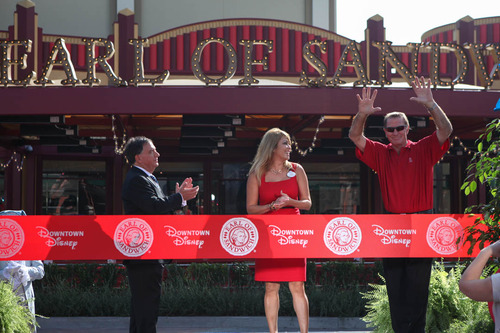 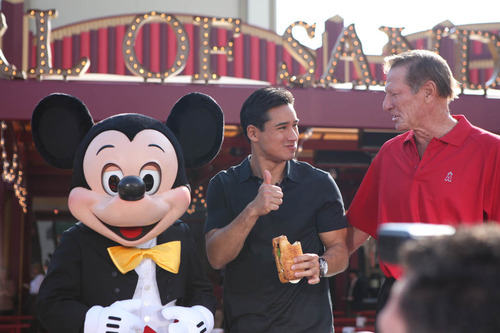 Mario Lopez from Extra TV, and of course… 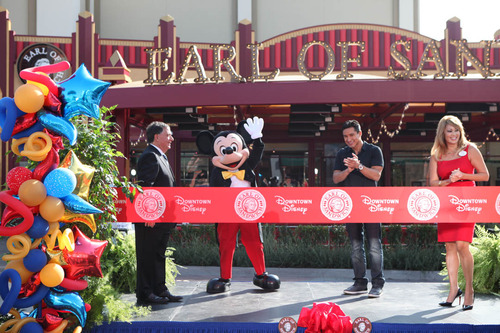 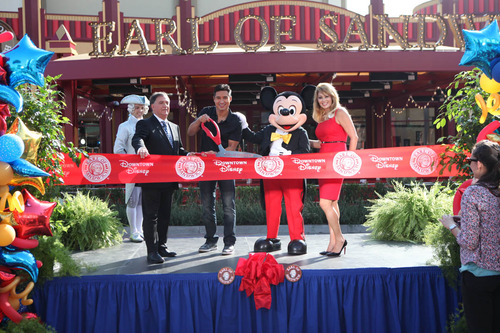 The ceremonial scissors were then presented on a REAL silver platter. Ready to cut? Only after the musical cue. 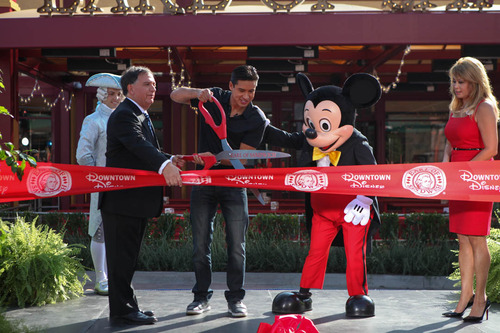 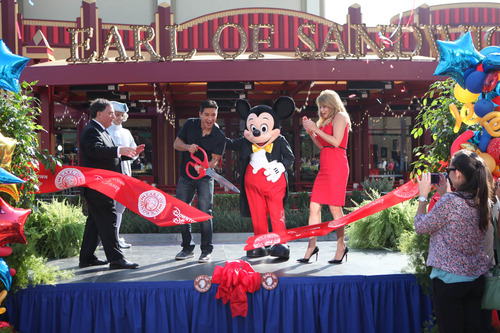 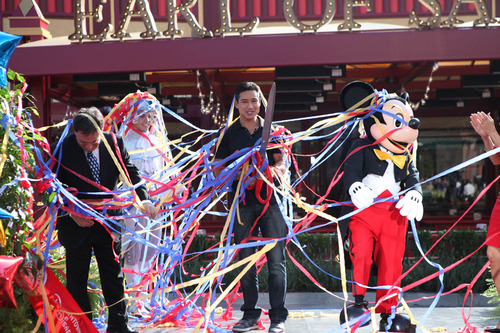 And for the 939128th time, I was frightened by the exploding pop of the confetti cannons that are at pretty much every single Disney event! All for good reason though…Earl of Sandwich was now officially open…or was it?! 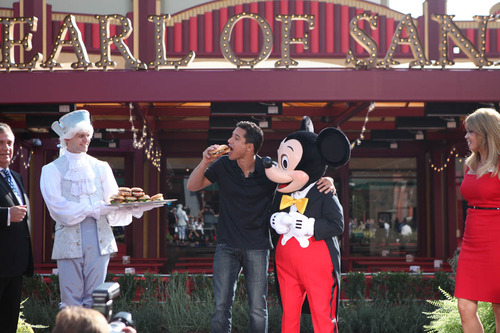 Nope. Not opened until Mario had the first bite. Literally. Robert Earl said it was a tradition they had at every opening. Tasty traditions are great, don’t you think?

Mickey, Mario, and Bobby sure think so!

After a couple photo ops, we had some time with Mr. Lopez, Mr. Earl, and Ms. Knox. 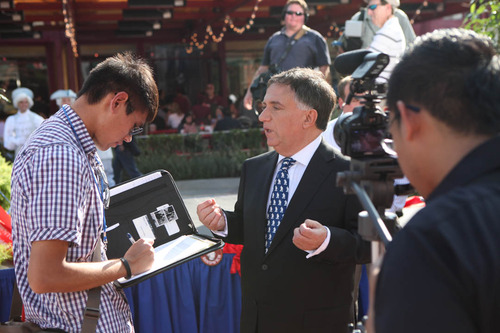 We were then invited to join on the post-event fun at the VIP reception. In the words of one employee, “Take anything you want.”

We happily obliged. And I guess this is where we’ll start our review of the restaurant and food. 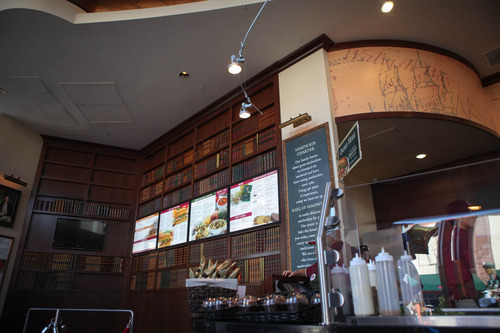 The location of the restaurant was previously a bookstore called Compass Books. Earl of Sandwich kept a momento from those days with the menu board design as you first enter.

As for the restaurant itself, it actually is quite small so far as the interior goes. It is mostly used for ordering, picking up your sides and drinks, and then paying (all in that order) which pretty much takes up the whole length of the building.

At the far end of the building, you’ll find some seating inside the rotunda, but most of the seating is located outside in the covered patio. 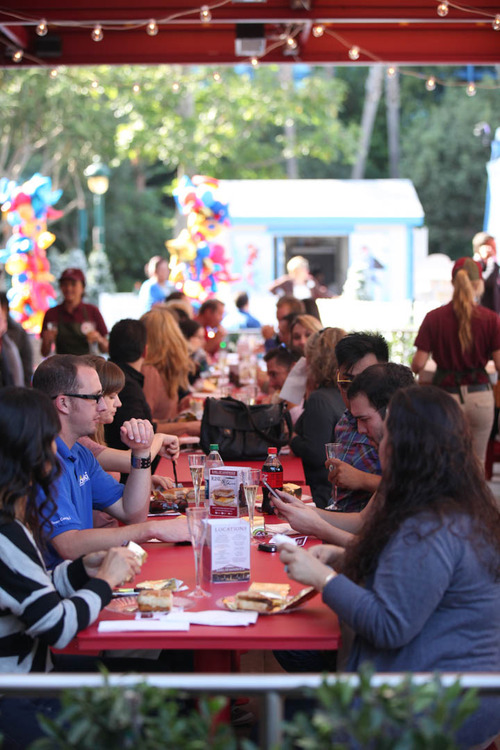 The restaurant brand prides itself in offering “Great Food, Served Fast” and that’s exactly what you’ll get at this location. Fast, friendly service. 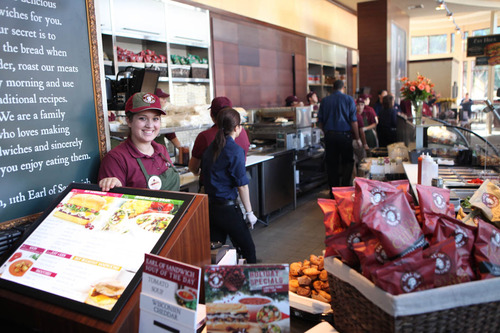 The fast and friendly part of the service is pretty much instilled in each employee! When we first visited the location on Monday the week of the grand opening, we went “undercover” so to speak without telling anyone we were with the media.

We wanted to get the true guest experience. In doing so, we overheard so many managers tell their employees to be kind and helpful to all the guests that entered or just stopped by to look around. Although the service was a bit confused and a little awkward on our first visit, it all paid off by the time we returned for the grand opening. The managers made service and friendliness restaurant culture and we’re sure appreciative of that…even anywhere we go! 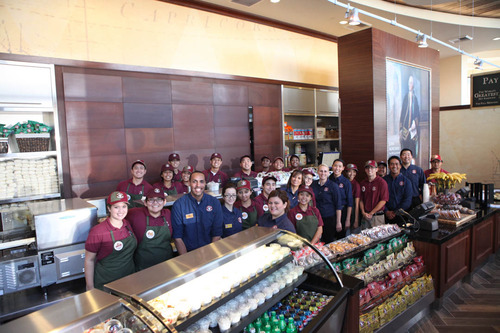 We wish all the staff of Earl of Sandwich at Downtown Disney California the very best. You all are, anyway.

In addition to the service, what also sets apart this particular food location on Resort property is…its location!

When I was speaking with both Janet and Robert, the one thing that they both hit on was that the location of this particular Earl of Sandwich is something that’s just as valuable as the food!

You really don’t have to visit the Parks or anything else for that matter at Downtown Disney if you didn’t want to. You could easily park in the Downtown Disney parking lot, walk the short distance from the parking lot to Earl of Sandwich, grab your food, and either sit on the spacious patio (which is completely heated for upcoming cold SoCal winters) or head straight back to your car for lunch at the office.

…or you could do what we tend to do and take the short walk to the Monorail station and head straight into Disneyland!

Convenience and choice make this location great for ANYONE – tourists and regulars alike.

To sum it up, we’re glad that fast, friendly service and benefits of the location are evident here because that’d give us more time to enjoy the food. That’s why we’re here in the first place, right?! 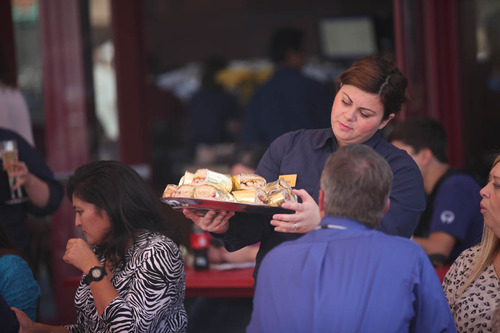 For the food review, we’d have to go back to our first tasting of the sandwiches that took place during our first visit on that Monday prior to the Friday opening.

I, Jordie, had never tried Earl of Sandwich before, but DE head writer Mike had at the location in Las Vegas. In any case, we both were looking forward to trying/re-trying “The World’s Greatest Hot Sandwich.” 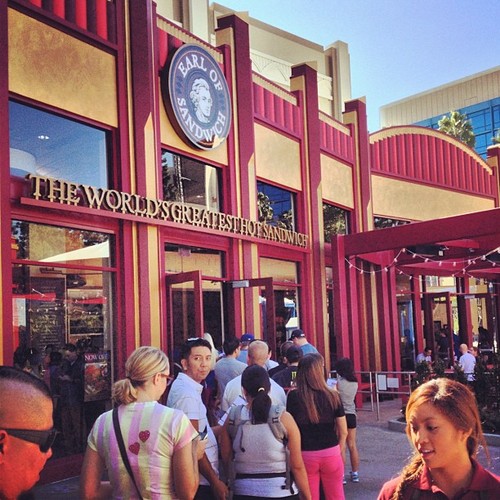 To be straight with you folks, it took us at first bite. We didn’t even speak to each other until we were half way done with our sandwiches (which were The Full Montagu, The Original 1762, and the Holiday Special [aka Thanksgiving Dinner in between bread seen in the picture below]; all of which we highly recommend!).

We aren’t kidding, folks. It’s not a Panini, nor a toasted sub sandwich that we have ever tried before. It’s its own sandwich; each one handmade with fresh bread and premium ingredients.

Bottom line: Try it. Any of them. You’ll want to.

To tempt you even more to try them all, you’ll be happy to know that each one of those sandwiches is priced at the amazing…price of $6.99!

In other words, that’s a STEAL folks! We were raving about the price ever since we heard of it. No catch here. Bottom line – $6.99 for a filling, tasty, quality portable meal.

This also happens to be the cheapest food offering that we’ve seen on Resort property…and we’re at the Resort A LOT and know it extensively. We’re mostly college students too at DisneyExaminer, so the price point is sooooooooo…helpful to our pockets. 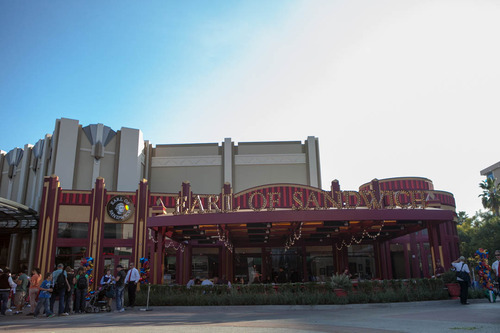 All in all, I guess that solves our dillema that we brought up at the beginning of this story – where could we find cheap, great food at the Disneyland Resort?

Sure the name has that royal “cha-ching” conotation to it, but you’ll only find that in the quality of their food. A sandwich, which is so synonomous with cultures around the world, has come in the form of a golden brick of sorts where the value of it really has to do with what’s inside and not the cost. 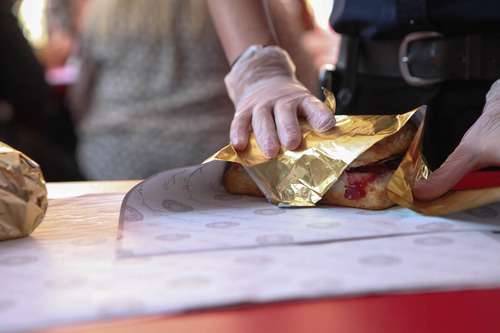 Combine that great food and great service with a great location and you’ve just found yourself the next great restaurant that is sure to be on your royal list of places to eat the next time you’re at the Resort…or if you’re just hungry.

Earl’s is there (and not just for Filipinos).

Enjoy our special video of the grand opening festivities below courtesy of our friend Ralph Corpuz from A Touch of Soul Productions!

We also wanted to note the few things that we feel we should also mention the following:

Thanks again for choosing DisneyExaminer.com for your Disney LIVE EVENTS coverage! Like our work? Your best compliment to us is your word of mouth! Please continue tell your friends and family about us…we can’t do it without you!