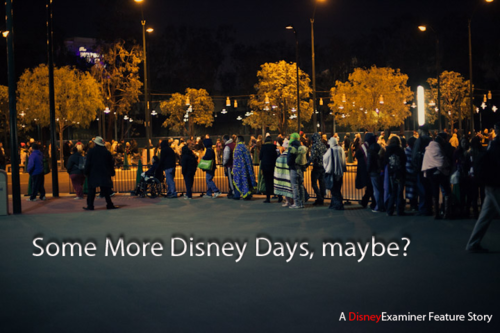 As you all know, today was One More Disney Day where guests are able to experience 24 hours of Disney magic at either Disneyland or Magic Kingdom Park at WDW. As with any firsts, there were slight problems and challenges that we had to face, but gladly took on those challenges.

So here’s a timeline with of what went down from 9:30 PM on February 28 to 8 AM on February 29 as we waited and then participated as some of the first guests for One More Disney Day at Disneyland Park.

9:30 PM – Arrived at the Pumbaa Parking Lot, the only lot available for guests waiting overnight. 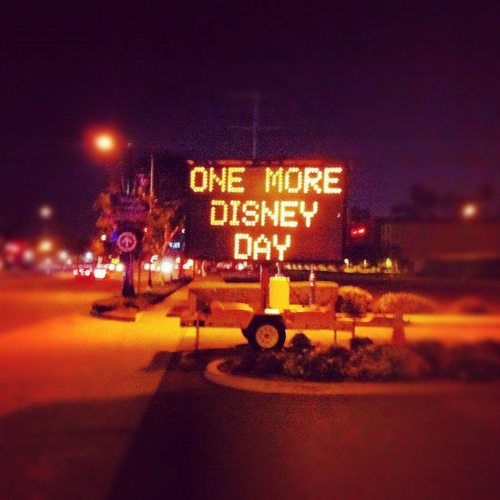 10:45 PM – We see that we are not the only ones with the same idea tonight. A rush of about 500 people joined us as we formed the official line outside in the Drop-off zone off Harbor Blvd. 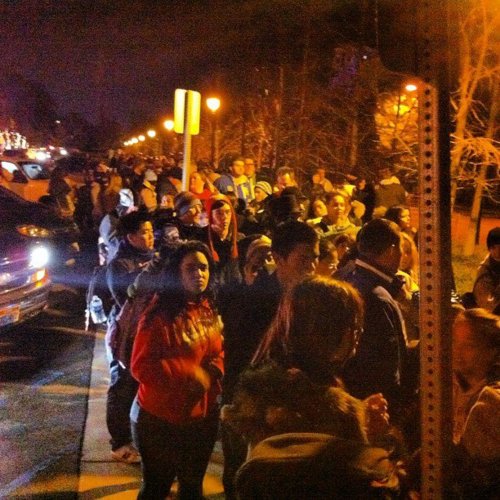 11:22 PM –  We relocate to our new waiting spot inside the Transportation Center (place with the giant cones). More people start arriving…close to 700 people now. 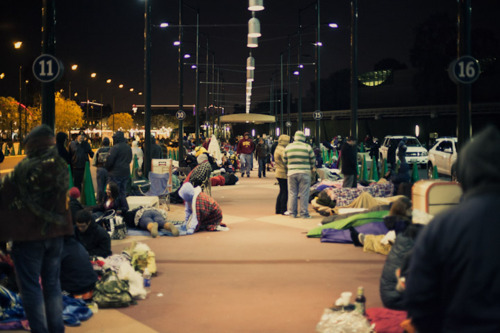 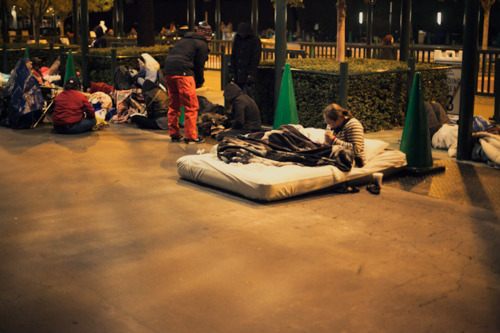 Panoramic shot of the line.

11:45 PM – Coldness and boredum kicks in for some of us…we decide to get tea and coffee all the way at the Disneyland Hotel! 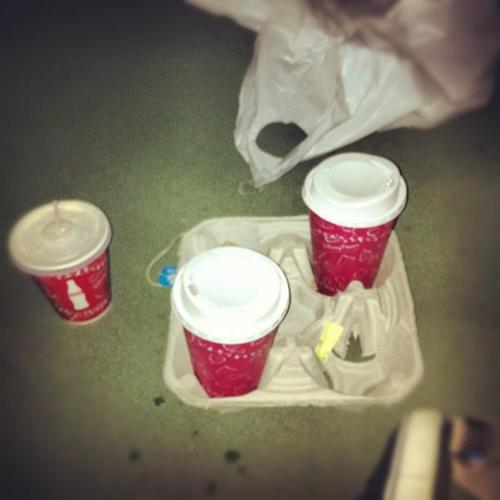 Here’s a video that we took around 12 midnight of what the crowds looked like then.

1:50 AM – We’re up and about, watching videos and checking Facebook on all our iPads. 4 of them to be exact. Starting to feel the temperature drop ten-fold. 49 degrees and dropping. 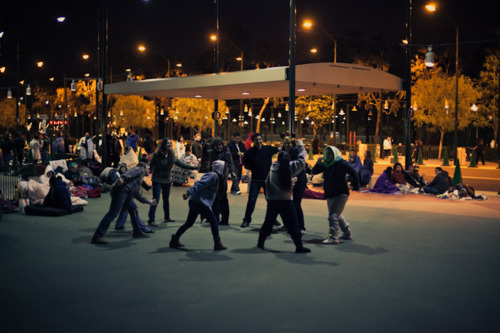 An attempt at the game Ninja.

2:20 AM – Restroom runs, knockouts on cold cement, no sleep at all, fellowship with a brother in Christ, restroom runs…

I’m going to tangent here really quickly. I must say that a lot of us were pretty much suffering outside during this time waiting outside. I wanted to go and stay in the lobby of the Grand Californian and report from a warm place. While me and Russell were walking there, we were stopped by a security guard. When we told him that we were headed to the hotel, we were impolitely told no. Now a simple “no” would do, but instead we had this security guard literally tell us “to suffer like everyone else.” Now we did not tell him we were media or showed our ID/Credential, meaning he viewed us as a regular guest.

In other words, he would have treated any regular guest this way. Both Russell and I were hurt. His way of responding to what he viewed as a regular guest was very unacceptable. Disney is known for their service and dedication to treating visitors like guests in their own homes. I wouldn’t want to be staying in that security guard’s home if I were to be treated and responded to this way.

3:28 AM – Urge to go to iHop or Denny’s for more warmth and breakfast. Temperature reaches a low of 43 degrees…the coldest it’ll be during our morning there. 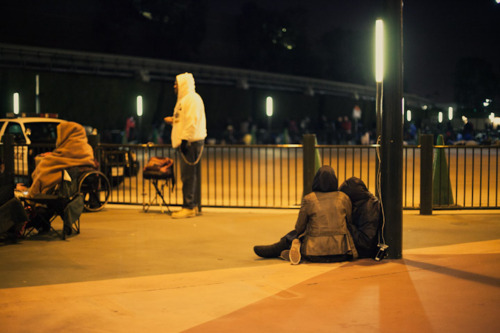 The connected age – got to charge your iPhone!

4:14 AM – We end up satisfying our desire of eating a yummy breakfast at Denny’s that included a ham and egg sandwich and tea. Less than 2 hours to go till opening! Morning couldn’t come faster.

5:00 AM – Camera lights begin to turn on signifying people to rise from their sleep and put their air beds and tents away. Local TV news crews started showing up and filmed our lovely 5AM faces. 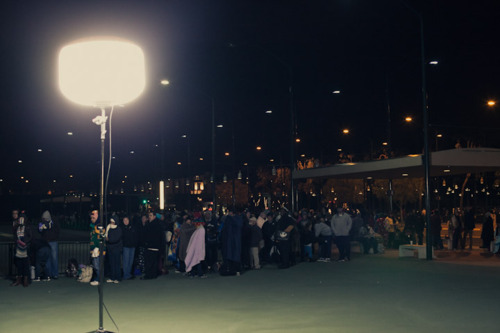 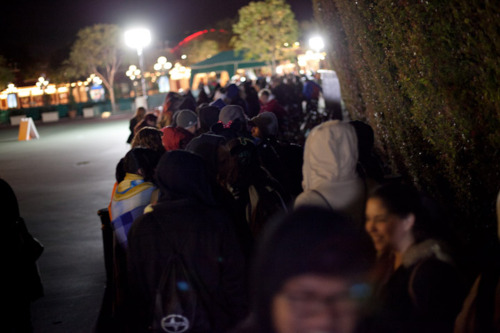 5:30 AM – We begin moving through security into the Esplanade. We’re greeted by a nice surprise. One of only 2,000 Ear hats made with the One More Disney Day logo on it! 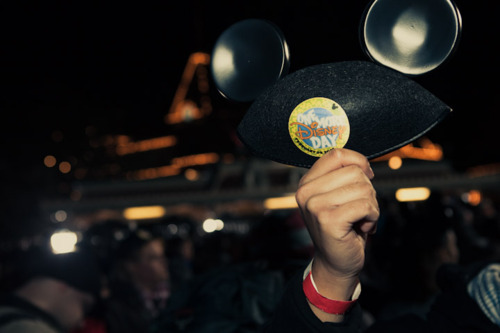 5:39 AM – More TV crews swarm the area. Disneyland Band comes out and plays some of our favorite Disney tunes to wake up to. 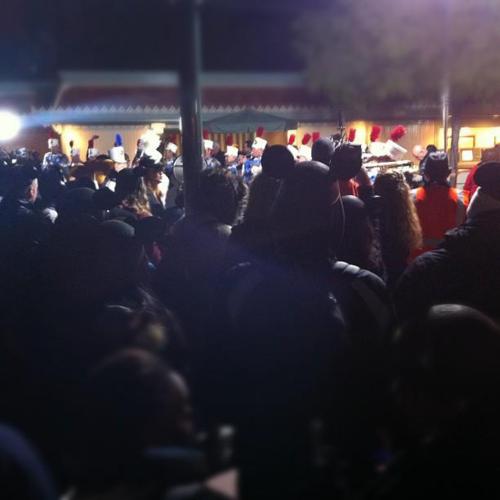 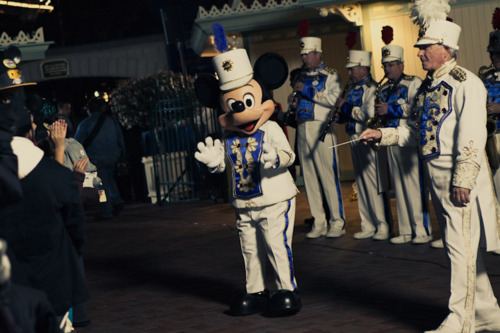 5:54 AM – We get duped. Fake countdown to opening makes us all laugh quite a bit. Still feeling physically dead. Can barely text as my hands were freezing. Literally. Temperature was around 40 degrees.

6:03 AM – 3 minutes late. One More Disney Day was not a really important date, I guess. We have the official countdown. We flip out our passes and then… 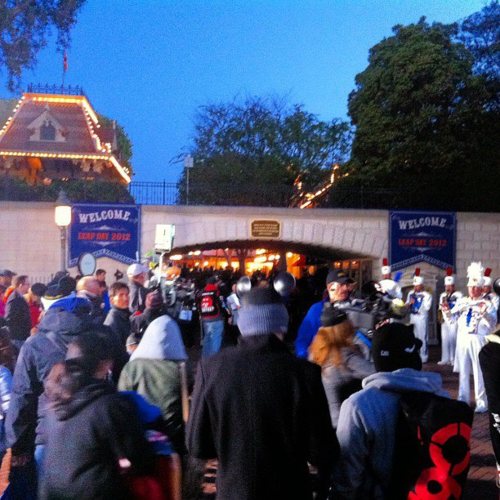 Disney Cast Members were out in full force greeting us all the way down Main Street by giving us high fives with their warm Mickey gloves. Awesome touch. 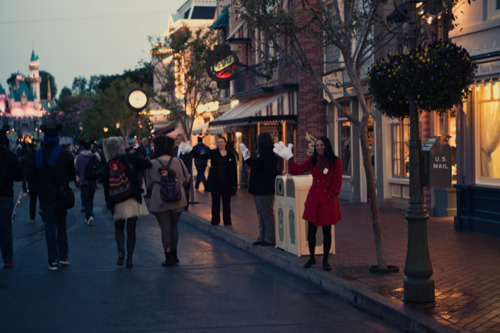 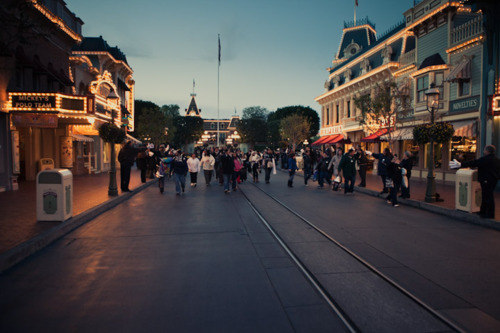 The lighting at Disneyland that morning was just gorgeous. 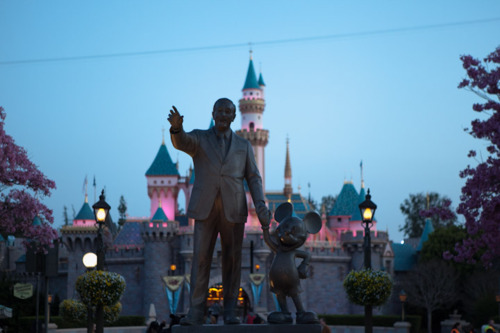 6:15 AM – Time to catch the sunrise! This, folks, is the real reason why we came and waited in the first place. This is the first sunrise that the regular public got to see from within Disneyland! Pretty special. 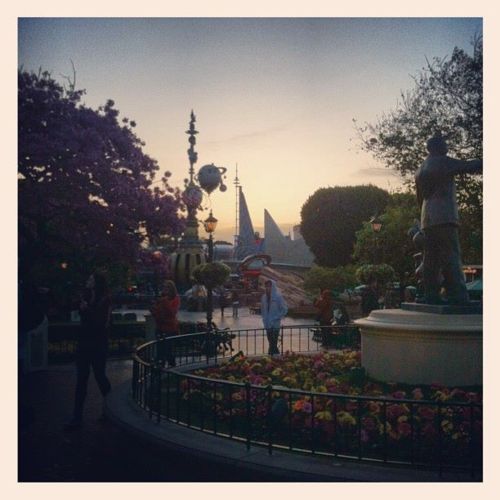 See some awesome sunrise shots taken by Russell below. They turned out gorgeous. God’s creation always looks beautiful…even from Disneyland. 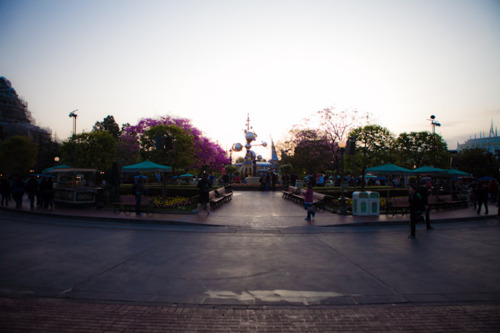 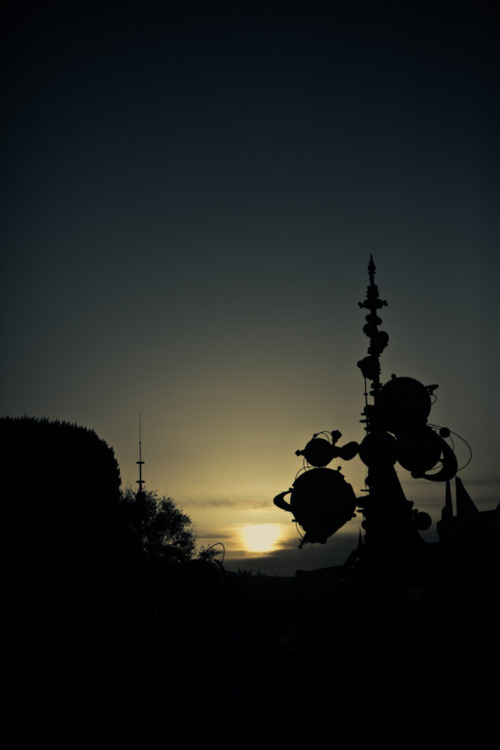 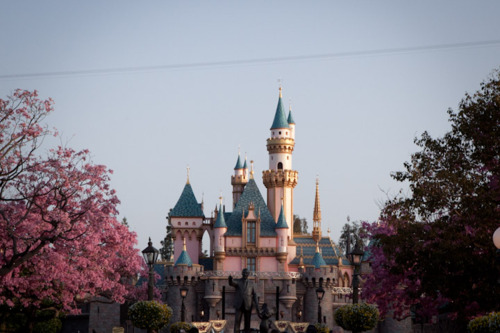 7:00 AM – We head to the Emporium to pick up our one day only special One More Disney Day merchandise. As you can see below, the Park was already bustling. 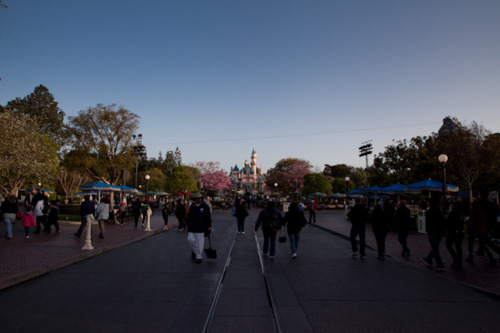 7:32 AM – We decide to ride at least one ride. Turns out that other guests started to arrive right at opening. Disneyland looked pretty busy already (i.e. – line for Space Mountain were already 65 minutes).

7:55 AM – We didn’t end up riding anything and called our morning quits. It was time to head home. Another type of magic and dreams awaited. In my house. In my warm bed. 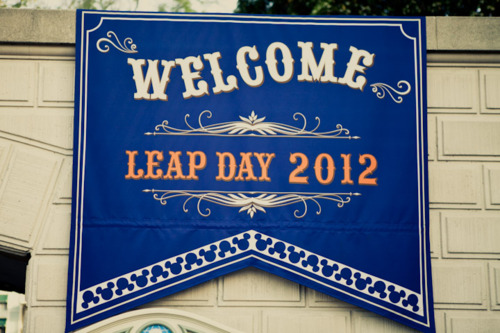 A sweet goodnight morning. The Disney characters wave goodbye as Disneyland closes at 6AM on Thursday, March 1 marking the end of One More Disney Day.

And that was it friends. The aftermath of all that ended up being quite worse than I ever expected. As I am writing this report from the lobby of the Fantasyland Tower at the Disneyland Hotel at 1:34 AM, we see that Disneyland closely reached its 65,000 person capacity a few hours earlier, which meant all Resort parking structures were full and no longer letting cars enter and that people were being turned away from entering Disneyland for most of the night.

Traffic around the Resort area was also a nightmare as there was no way to relay to cars and visitors wanting to enter the parking areas that they were filled. The I-5 Southbound swelled with traffic a few miles down. The surrounding streets around the Resort were gridlocked. It actually took us about 2 hours for me an Russell to get to Downtown Disney where we could park. Not to mention that the Park was understaffed and food was selling out.

In the end to sum it all up, One More Disney Day reminded me what the Resort looks like during New Years Eve….crowded. As this was a first for Disney and for guests, it was certainly worth the trouble. Our adventure waiting in line the night prior and seeing awesome things like the sunrise were things I enjoyed doing. Amazingly, the mood inside the Park was positive. Everyone just loved the fact they were part were part of Disney History. Period. 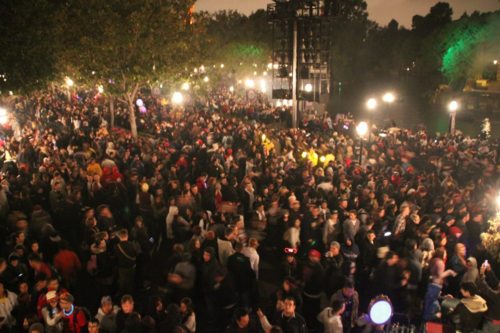 The amount of people that watched the special 1 AM showing of Fantasmic! (Photo copyright Disney).

If there was one thing that I could really critique it would probably be the lack of “special activities”. Maybe at the next event (if they decide to do one) would be to create special guest experiences inside the Park itself, like the Disney Parks Blog event and open it up to more people. That’s all. Really, that’s all I have to say about negatives, if you even want to call it that.

In the end, it was all good for Disney business. According to our sources, here are some of the numbers that paint a vivid picture on what exactly went down during One More Disney Day:

This all leads to one question: Should there be some more (One) More Disney Days?

Those are indeed “magic” numbers. Can we expect these crowds for the relaunch of DCA and Opening of Cars Land? Only time will tell… and maybe after guests get some well deserved rest.