Well, we didn’t know it at first, but the previously released title of an upcoming Disney movie wasn’t its real title.

As we previously posted, Disney’s “1952” had an official title change today. It is now being called “Tomorrowland.”

The film will still star George Clooney and will be produced by Damon Lindelof (ABC’s “Lost”) and Brad Bird (“The Incredibles”). But what is more of the important issue for us at the moment is obvious.

What will this film be about?! From what we have been able to gather, we are certain that it has to be about the Disney Park’s land of the same name.

Well, possibly. 1952 was the year that WED (Walter Elias Disney – Walt’s full name) Enterprises (now Walt Disney Imagineering) was founded for the sole purpose of creating experiences for guests coming to Disneyland and now the rest of the Walt Disney Parks.

In addition to all of that, producer Brad Bird tweeted one image (seen above) that could probably give us the biggest clues. The image of a box with a label that said “1952” contained many items, including pictures of what appears to be of Walt Disney in his early years. Could Clooney be playing Walt?*

A whole can of worms has indeed been opened and now only time (according to when Disney sees best) will tell what this movie will be all about.

Disney’s “Tomorrowland” is slated for release on . 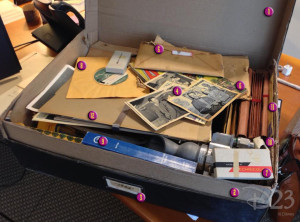 UPDATE 2/6/13 – Our friends at D23 have released more information on the contents of the box as uncovered by Walt Disney Archives Director Becky Cline. Take a look at the numbers above with the corresponding number below to see what Becky was able to uncover. –

What do YOU think this movie will be about? Are you thinking what we’re thinking? Comment with your ideas!