Editor’s note: In addition to its live action and animated films, the Walt Disney Studios also releases their version of nature films under the banner Disneynature. Each of the Disneynature films does indeed show various things in nature, but doesn’t leave it at that like your 6th grade science videos. With previous films like “African Cats”, “Oceans”, and now “Bears”, they each tell a fluid story that keeps you engaged and entertained. By taking nature for what it is (or in this case just taping the grizzly bears in the wild) as the actors, these films still bring together the emotional storytelling that Disney is known for. Read on to see what we thought of “Bears”!

In an epic story of breathtaking scale, Disneynature’s new True Life Adventure “Bears” showcases a year in the life of a bear family as two impressionable young cubs are taught life’s most important lessons. Set against a majestic Alaskan backdrop teeming with life, their journey begins as winter comes to an end and the bears emerge from hibernation to face the bitter cold. The world outside is exciting—but risky—as the cubs’ playful descent down the mountain carries with it a looming threat of avalanches. As the season changes from spring to summer, the brown bears must work hard to find food—ultimately feasting at a plentiful salmon run—while staying safe from rival male bears and predators, including an ever-present wolf. “Bears” captures the fast-moving action and suspense of life in one of the planet’s last great wildernesses—Alaska!

What comes to mind when you think of ‘Bears’? Is it the ferocity of their claws and teeth, or is it the way the ground shakes as they walk? When I personally think of bears, I never thought much of them. But as I watched this movie, not only did it change my view, it educated it. It opened me to a whole new world, a world of bears.

Disneynature “Bears” tells the story of a family of bears consisting of a mother (Sky) and her two new born impressionable bear cubs (Amber and Scout) whose journey begins when winter ends, finding themselves experiencing the world for the first time, as well as discovering its perils. The film takes place in Alaska where Sky struggles to find food for her baby cubs to last through the next hibernation. The whole movie focuses on the hardships a mother will endure for its child’s survival. 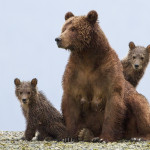 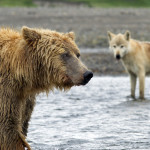 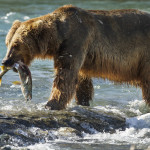 I was very surprised with “Bears” as it came to be a very heart warming film. I’m not very well acquainted with nature documentaries, given the traumatic experiences I’ve had with the genre, but this film had me rethink it again. I was blown away by how this story was told. It didn’t just have bears walk around while some guy (err…Morgan Freeman) narrated their actions, but instead told it in a way that related to us by expressing it in a way we are used to hearing – through plain and simple storytelling (as told with the voice of John C. Reilly).

And just like real live action films (with humans), the film also establishes a deep connection with the characters and makes the viewer actually sympathize for them, leaving them wanting the bears to persevere…and how awesome is that?! Being able to relate to something real that isn’t human is something that is quite unique in this realm of movies.

Altogether, “Bears” is THE perfect movie to see with the kids. It’s given an opportunity for them to experience more certain parts of the world, listen to the significance of family, and most importantly: to learn more about bears! This movie was ‘BEARY’ adorable, and is a movie worth getting together for.

Be sure to watch “Bears” this weekend to help preserve our U.S. National Parks which is the home to many of the wildlife (including the bears) that you see in the film! To learn more about Disneynature and see the other nature films that Disney has released and some great educational materials, click HERE.

These films have been screened prior to the release date for review purposes and therefore are viewed without charge through The Walt Disney Studios.