Last year at the D23 Expo, we were introduced to the new slate of films that would be releasing this year from our friends at the Walt Disney Studios. One of those films particularly caught our interest as it did with the rest of our audience members as we heard two things that we thought we’d never hear together: Marvel comics and Disney animation. 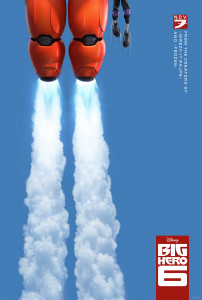 But we did hear it right and that fusion of these Disney-owned elements has given Walt Disney Animation Studios their next film. “Big Hero 6” will be the 54th film from the 90+ year old animation studio and will certainly herald a new era for the studio as well with incorporating another piece of intellectual property that isn’t originally their own.

The title of the film stems from the long-lost Marvel comic book series of the same name. The story of the film, which is based very loosely on the original comic, chronicles the life of a boy robotics prodigy, his “huggable” robot sidekick, and his group of high-tech heroes as they team up to save the day in what Disney is calling a “comedy-adventure”.

The full trailer is above and we’ve included the official synopsis below:

With all the heart and humor audiences expect from Walt Disney Animation Studios, “Big Hero 6” is an action-packed comedy-adventure about robotics prodigy Hiro Hamada, who learns to harness his genius—thanks to his brilliant brother Tadashi and their like-minded friends: adrenaline junkie Go Go Tamago, neatnik Wasabi, chemistry whiz Honey Lemon and fanboy Fred. When a devastating turn of events catapults them into the midst of a dangerous plot unfolding in the streets of San Fransokyo, Hiro turns to his closest companion—a robot named Baymax—and transforms the group into a band of high-tech heroes determined to solve the mystery.

Will you be watching “Big Hero 6”? Does the trailer give you the impression that this movie will be a hit (if not more) like “Frozen”? Would you like it if Disney did more male-centric films like this? Comment below!