Marvel is no stranger to transformations.

It’s an integral part of the culture; someone stepping out of their comfort zone to become something bigger than themselves. People love believing in their greater potential and proving the naysayers wrong. Not only does this theme apply to the comics, but as we’ve seen throughout the Marvel cinematic universe, these transformations have also been proven through the actors that stepped up to become the heroes we know and love.

Marvel’s newest contribution to the cinematic universe is Ant-Man, and it stars Paul Rudd, Michael Douglas, Evangeline Lilly, and Corey Stoll. This all-star cast happened to be at the global press conference held at the Walt Disney Studios last Saturday and it seems a few of them understood the gravity of the roles they took on and the expectation that came with it. Paul Rudd, who plays our protagonist, acknowledged the initial doubt that not only audiences had, but he had as well, when he accepted the role, saying, “…I enjoyed the fact that when I was cast people went, huh, really – that you wouldn’t necessarily think that, and I think that Marvel likes to do that and I was thrilled to have the opportunity.” 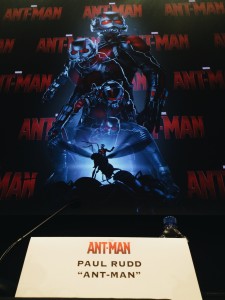 Paul Rudd, who is known to be the funny man in most films, seamlessly transitions to leading man status in the film, finding the balance between comic relief and sincerity. There seems to be a pattern in Disney and Marvel’s Cinematic Universe with these comic actors stepping out of their comfort zone to become these unlikely heroes that we look up to; we’ve seen this with Chris Pratt becoming Star-Lord and even Chris Evans becoming the first Avenger, Captain America. I think something can be said about the brilliant casting within these series of films, how they found potential in people that most would initially discard.

However, the transformation is not only in the type of characters these actors play, but also in the new audiences they are appealing to. The legendary actor, Michael Douglas referred to that truth, recalling his kid’s opinion on this new
role as Hank Pym, “my 14 year old’s reaction was like an agent. He said, ‘You know, Dad, this could
be a whole new audience for you.’ So I took that to heart and here I am.”

David Dastmalchian, who is typically a serious actor and has appeared in darker movies, offers much of the comic relief alongside T.I. Harris and Michael Pena. When asked how it felt to take on a lighter, comical role, he expressed his fears saying, “terrifying at first for me, ‘cause that’s not the zone that I’m the most comfortable playing in, and then you get to show up and you’re with these guys.” Luckily for us, he took the plunge into the role, because the chemistry between these three definitely add to the appeal of the film.

Marvel Studios has done a good job at creating transformations we can believe in on the screen and off. What is incredible to witness is that the belief isn’t in single characters, but in the cast and teams they put together. Kevin Feige, Marvel Studios president, acknowledged the significance in the expansion, “it’s incredible to look down the line and the table keeps getting bigger and bigger.” And with another film down, we add another vital piece to the Marvel Cinematic Universe.