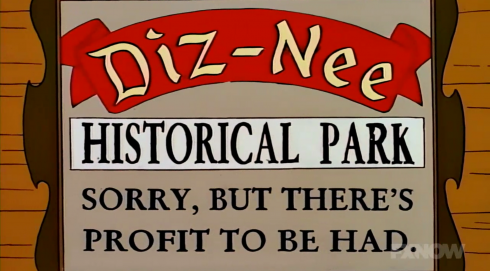 Banksy’s Dismaland isn’t anything new when it comes to poking fun at Disney’s theme parks. In fact, many “artists” over the years have satirized or parodied the Happiest Place on Earth.

Here’s a few of my favorites! 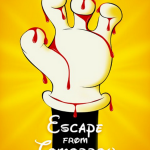 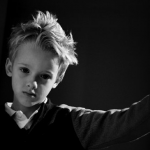 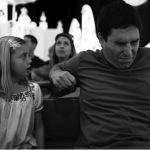 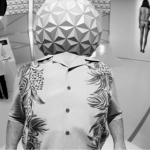 “Escape from Tomorrow” is an independent film set in Walt Disney World, filmed without Disney’s permission. It goes without saying that the content of the movie is also not Disney-esque; IMDB rates the movie R for various reasons.

The film follows a father on vacation with his wife and two children. The audience follows his descent into madness, helped along by the spread of what the characters call “cat flu”. With this, the movie makes an effort to contrast the child-like innocence associated with Disney with progressively more and more disturbing ideas and visuals. The supposed tension between the Disney we know and the Disney behind the production is made very clear in this film.

The movie was filmed inside various Disney Parks without permission, but in an interesting twist Disney has declined to comment on the film to an extent. As the Hollywood Reporter notes, “Escape from Tomorrow”‘s provocative style may have backfired due to Disney’s dismissal. Still, the film is an interesting take on the corruption and exploitation of Disney innocence. 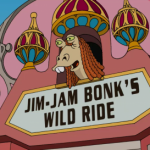 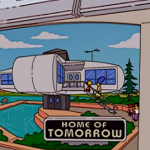 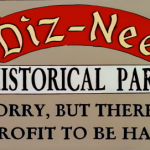 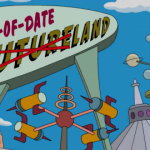 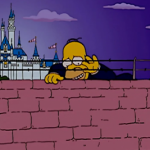 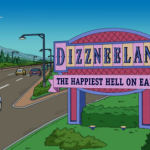 America’s favorite animated TV family has also traveled to a version of the Disneyland. In fact, The Simpsons have visited many Diz-Nee parks! Diz-Nee Historical Park is shown in one episode where Springfield Elementary students can only afford a field trip to the parody park (and not to the fabled theme park).

A few seasons later, Homer, Marge, and the family made their way to a very similar “EFCOT”-like park where they got to experience real-life past attractions like the Home of Tomorrow at Disneyland. Little do they know that they are in an illegitimate park, in which Homer decides to climb a prison-like wall to enter the real Walt Disney World nearby (and celebrating by happily buying a $14 churro).

Those weren’t the Disney-like vacations the Springfield family took! They eventually visited Dizzneeland, which was very much a parody of the California theme park – from how long it takes to get from the parking structure to the main gates, all the way to riding an attraction called Jim-Jam Bonk’s Wild Ride. The whole episode is an exaggerated look at a “normal” visit to Disneyland, giving audiences a more lighthearted parody of Disney experiences in comparison to “Escape from Tomorrow”‘s satire. While the Simpsons isn’t afraid to point out flaws, it does so with tongue in cheek humor. 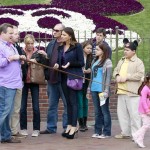 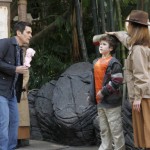 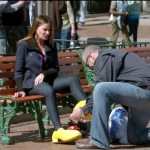 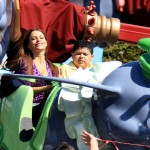 Of course, the Disney-owned ABC’s #1 family sitcom had to have a Disneyland reference and back in 2012, it sure did with an entire episode dedicated to satirizing the theme park with an original story. The Pritchetts and Dunphys decide to go to the Happiest Place on Earth, but like every other episode, things begin to get a little “goofy”.

Creator Steve Levitan and the cast spoke about what those “goofy” things would be like to deliver the story. Many of the things featured in the episode are exaggerated Disney park ideas, like Lily on a child leash or Gloria wearing comfortable Minnie Mouse shoes. These were, in fact, taken from real-life experience they had while they visited on their own. It helped that the cast also reiterated their magical experiences at Disneyland when we interviewed them a few years later!

Modern Family’s take on Disney parks is again lighthearted. While it does poke fun at normal Disney parks experiences, it does so in order to emphasize ideas about family and togetherness. 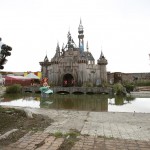 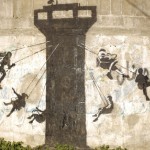 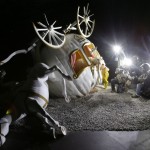 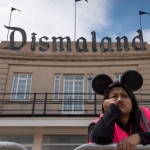 With exhibitions ranging from the highly political to seemingly simply artistic, Banksy’s Dismaland has baffled Disney fans and critics alike. As CNN reports, Dismaland is actually a collection of work by over 50 artists, including Banksy himself. Featuring both exhibits and rides, Dismaland aims to be a “bemusement park“.

Like “Escape from Tomorrow”, Dismaland takes advantage of the stark contrast between Disney’s claim to innocence and controversial political messages. By pitting childhood memories against the political, Banksy and other artists seem to be aiming to communicate specific social ideas – though of course the artists have left the meaning of the park open to interpretation.

I don’t know about you all, but after seeing those examples alone, I’ll take Walt’s Disneyland any day.

Tami Orendain contributed to this story.