The secrecy behind the forthcoming Star Wars film is intense. That’s very much obvious given the little information we’ve gotten from the trailers and Disney’s internal “hush-hush” mandate given from Disney’s CEO Bob Iger. All of this hasn’t stopped Star Wars fans to use their own Jedi powers to get hints at what’s to come.

We’ve made it a commitment here at DisneyExaminer to not be part of those fans who want to find out more about the film. However, our attempts have not entirely been successful. We recently received a box filled with Ep. 7 die casts featuring the vehicles that will be used in The Force Awakens.

In our recent unboxing video that we did live via Periscope a few nights ago, we revealed things like the First Order Snowspeeder and a Resistance X-Wing Fighter. What we weren’t expecting is to learn more about the film via the short descriptions written on the back of each of the die casts’ boxes!

First Order TIE Fighter: “Following the tradition of the Galactic Empire, the First Order has kept the TIE Fighter design in service, but has updated the craft to modern combat standards.

Resistance X-Wing Fighter: The modern incarnation of a classic design. The Incom T-70 X-Wing Fighter is the signature combat craft of the Resistance forces in their fight against the First Order. 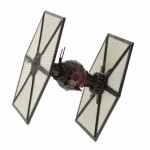 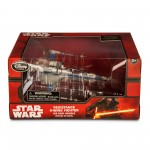 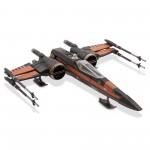 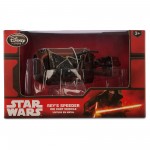 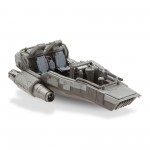 While these descriptions don’t give anything away in regards to the story of the film, they do offer up more pieces of information that’s keeping us wanting more…which is what Iger, J.J. Abrams, Lucasfilm, and Disney want!

But just in case you spent all your money on tickets for seeing the film multiple times, we’re having a giveaway of some of those die casts exclusively for you, our DisneyExaminer Jedi.

Head on over to our Giveaways page for more details.