As Spielberg’s first Disney film, “The BFG” marks a unique intertwining of the minds of Spielberg, Dahl, and Disney. Just earlier this week were were lucky enough to join director Steven Spielberg with actors Penelope Wilton, Mark Rylance, and Ruby Barnhill to talk more about how this children’s favorite made it onto the big screen.

Wilton had much to say about the many creators behind the film, specifically Dahl and Spielberg: “with BFG you get one great story writer meeting one great film story teller.” Wilton also praised writer Melissa Mathison’s script and commended her for the way that, “she keeps very closely to the book.”

Yet there are major differences between Dahl’s novel and Spielberg’s film. Primarily, the film downplays the darker, more violent aspects of the story, especially in terms of the giants eating children (an element of the film that most studios weren’t very enthusiastic about). It took Mathison years to find a studio due to the darkness of the original script, but happily Steven Spielberg’s own studio eventually took interest. While initially Spielberg had little to do with the film, a vacation spent reading the script encouraged him to actually take it on as the director: “My company was going to make it, and I read it, and I just said ‘I feel this in my bones. I just deeply feel this story, I just feel like this is a story I could do a good job with, and I should tell this story'” Spielberg shared. 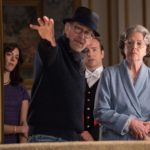 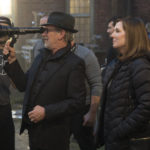 Rylance speculated on Spielberg’s interest in the story: “probably subconsciously he’s very attached to the loneliness of The BFG.” Already good friends with the director from their time working together on “Bridge of Spies”, Rylance commented that as a child he must have, “got through by making, mixing dreams, mixing stories. In that way it’s almost sort of biographical.”

The connection between Spielberg and Dahl may reach even farther than biography. “I think that Steven’s attitude to life is one where he’s very fresh and there’s a part of him which actually enjoys being a child, he works terribly well with children,” commented Wilton. “He has an imagination, and a freshness of imagination, which is what makes him a real brilliant filmmaker.” It’s no surprise that Spielberg found himself attracted to Dahl’s writing – both seem to be masters of imagination. 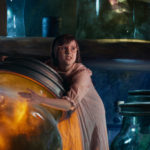 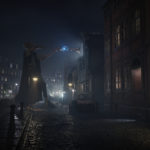 A third mind, however, was added to the already magical mix of “The BFG” – Walt Disney’s. Spielberg, in fact, commented how affected his film making was by Disney himself, even before the outset of this project:

“One of the attractions was that I was really influenced as a kid growing up with Walt Disney, and Walt Disney did two things for me: for one thing he scared me more than anybody else, then he rescued me from the fear he instilled in me five minutes after he terrified me.”

Aside from lighthearted jokes about Disney’s intense presence, Spielberg also shared his affect on his perception of female characters: “the other thing Walt Disney did was he extolled the virtues of strong women characters, and he did that throughout his entire career…and one of the things that attracted me to this story was the true grit of the character of Sophie.” 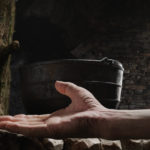 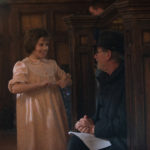 Sophie is indeed a major character of the novel and of the film, and Barnhill had much to say on her character. “It’s always nice to play someone as bossy [as Sophie],” she commented. “She’s very independent and very strong-minded, but behind it all she’s got a very big heart, and she’s quite sensitive. So it was really nice to play her because it was a mix of different emotions.” Sophie, in fact, can be seen as a combination of the great minds behind “The BFG” – she’s based on Dahl’s character, embodies Disney’s strength, and is realized in Spielberg’s vision.

While the film has roots in all three of these creative imaginations, Spielberg insisted that in the end, the message of the film is up to interpretation. “The theme of the movie is something that everybody can kind of determine for themselves, because I found after years of experience talking about my films, you know, my defining my intentions limits the imagination of those who haven’t seen the film yet.”

“The BFG” is as wonderful as the three creative minds who made the film happen. Be sure to catch it on or after July 1st so that you yourself can determine the message of this instant classic!