Today’s special review comes from Mercedes Bull, who traveled all the way to the U.K. and got to see the incredibly popular “Aladdin” show on stage! In her review she takes us through different aspects of the show, highlighting why, despite small flaws, this show is definitely a must-see.

Special thanks to Mercedes and her willingness to share her thoughts on “Aladdin” with us! You can learn more about her on Instagram and Twitter @mercedeslois.

Two years after its Broadway debut, Disney’s Aladdin has finally made the voyage overseas and landed with a bang in London’s West End. Fortunately, I received tickets to the show as a birthday present which I was hugely excited about and such, here is my review of the show. 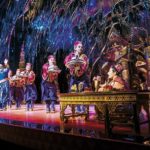 Whilst the overture played and the curtain was raised to the popular sounds of Arabian Nights, Friend Like Me and Prince Ali, I was immediately reminded of the grandeur that Alan Menken’s score inhibits. Shivers were sent down my spine. It was a reminder of why Disney is just so popular. The music alone is testament to the fact that Disney storytelling goes above and beyond the norm expected from a ‘children’s’ animated movie. Sitting there I felt this music was meant to be performed on stage by this incredibly talented, all-star cast of performers and musicians. We were minutes in and, already, I was gripped. 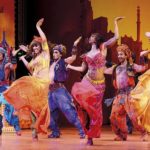 My personal favorite aspect of the show? The costumes and sets by far. It was a real spectacle. I think that Charles Isherwood of The New York Journal put it perfectly when he said that the show had “enough baubles, bangles and beading to keep a whole season of RuPaul’s Drag Race contestants in runway attire.” The show was honestly the glitziest, most sparkly, wondrous creation I have ever seen. I particularly loved Jasmine’s costumes, Prince Ali, and the incredible Cave of Wonders set, which was mesmerizing. 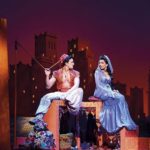 As the musical progressed we were introduced to our main protagonists; Aladdin portrayed by Dean John-Wilson, The Genie played by Trevor Dion Nicholas and my favorite character, Princess Jasmine, played by ex-Sugababes star, Jade Ewen. The cast was perfectly formed and brilliantly selected, however, Dion Nicholas’ Genie was by far the stand out performance for me as I felt some of the others vocals were a little weak at times… although I’m pretty sure my boyfriend would disagree and say that the girls’ in The Swing stole the show!

The only slightly negative aspects of the show for me were the Jafar and Iago scenes, which felt a little ‘pantomime’ at times. In places, you could argue that The Genie was also a little ‘panto’ as he broke the metaphorical fourth wall by addressing the audience directly and burst into contemporary song. However, I felt that in order to bring together the zany, kooky, cartoon-like performance brought by the late, great Robin Williams in the film, these moments of wackiness and pop culture references were not only appropriate but necessary. 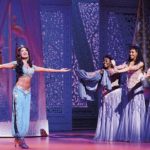 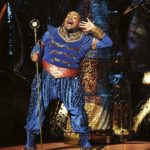 Other differences between the movie and the show included the absence of Rajah, Jasmine’s pet tiger, and Abu, who was replaced by three friends for Aladdin: Omar, Kassim, and Babkak, who actually turned out to be some of my favorite characters in the show. A very welcome addition.

Finally, I must touch upon probably the most famous aspect of Aladdin: The Magic Carpet. All I will say without spoiling it too much is that it was present in the show and it was as amazing as I had hoped. Seriously, A Whole New World brought a tear to my eye – I am a softy!

You can purchase tickets to Aladdin by phone, online and in person; more information is available on the official website. Currently tickets are available until February 11th 2017 however, the show will probably be extended given to it’s huge success thus far.

Overall, Aladdin as a musical was, in my opinion, a great adaptation of the popular 1992 movie. I would give it a solid 4 out of 5 and definitely recommend that you get tickets to a performance if you can! You won’t be disappointed.