A look inside a Dolby Cinema theater

You’ve heard of Dolby before.

It was most likely something you saw in on an audio device with that iconic Dolby logo and the words “stereo sound” next to it or saw the same logo on movie posters at your local theater.

The company itself has been around for over 50 years and has specialized in pioneering audio enhancements for consumer devices and movie theaters. Those enhancements included more robust audio outputs and the use of those outputs like the idea of “surround sound.” It was these advances that ultimately lead Disney to approach the company.

“We’ve had a very long relationship with Disney,” said Stuart Bowling, the director of content and creative relations at Dolby. “The conversations we’ve had with them ever since have revolved around the idea of enhancing the moviegoing experience.”

Those discussions included chats with creative leaders at the Disney included John Lasseter at Pixar who wanted to get creative with sound for “Toy Story 3.” “He told us he wanted to do things like have sound effects for objects in the scene to travel all around the audience, like sound above a scene. This type of thinking was right up our alley in terms of being able to begin building these audio enhancements.”

While it wasn’t ready early enough to launch with the film, Dolby ultimately came up with one of their most innovative audio products ever: Dolby Atmos. In effect, it did what Lasseter was wanting to have done and added to surround sound where it lacked – sound on top of the audience. Dolby added “smart speakers” above audience’s seats in what was the Kodak Theatre (now the Dolby Theatre – not kidding) for the world premiere of Pixar’s “Brave” back in 2012. The audience so well to the experience with the new audio that Dolby decided to spread the technology to other spaces that were willing to retrofit their theaters with the additional speakers.

But the innovations didn’t stop there according to Bowling. More discussions came up with filmmakers to be able to enhance the visuals of the movie itself.

“It wasn’t something that we specialized in,” Bowling continued. “But we are an innovative technology company, so we explored what we could do to satisfy the wants of the filmmakers.” Through those meetings with filmmakers, Dolby Vision was born. It was a technology that first debuted for in-home TVs that made all the imagery shown even more enjoyable with crystal clear detail, brighter colors, “true” blacks, and crisp contrasts. Dolby technicians were eventually able to scale the perfected picture tech to cinema screens. 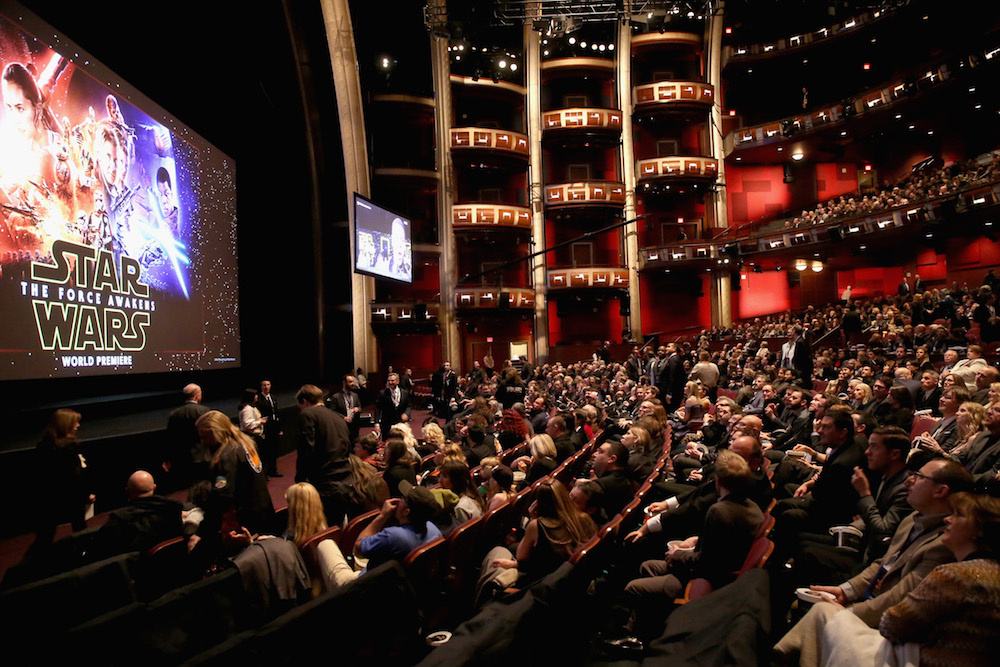 Both Dolby Vision and Atmos were used for the world premiere of “Star Wars: The Force Awakens” inside the Dolby Theatre in Hollywood in 2015.

But it quickly became apparent to Dolby the biggest hinderances in being able to enjoy both Vision and Atmos – the actual theater space itself. It was actually one of the biggest disappoints I had when watching “Pirates of the Caribbean: Dead Men Tell No Tales” at Dolby Theatre for the Hollywood premiere which was being presented in Atmos and Vision. The sound and picture quality were heavily uneven and didn’t match up to the standards that Dolby had touted.

But I was reminded that the Dolby Theatre isn’t a space that Dolby designed, nor was a place to play movies with its tall walls and no projection technology. Dolby had partnered with many studios to present their films using the technology for premieres, which required teams to retrofit each space with the technology. It’s something that they began to do for chain movie houses with Atmos, but was enjoyed to varying degrees since some theater owners weren’t always capable or willing to maintain the systems.

“What good is our technology if they can’t be enjoyed to their fullest potential?,” said Bowling. “We needed to put Atmos and Vision together the way we believe they must be enjoyed.”

That desire to house their pioneering technologies led them to create what is called Dolby Cinema. It’s name describes what it is – an entire theatre designed and crafted with precise specifications and then quality tested by Dolby technicians and designers. Everything in the theater had the purpose of limiting distractions and pointing the attention to the movie itself, from the black colored walls to the curvature in the arrangement of the seats.

While the first Disney movie that debuted that was formatted specifically for Dolby Cinema was “Tomorrowland” in 2015, I just recently had the opportunity to experience a Dolby Cinema at my local AMC Theatre (one of only a handful of movie chains that Dolby has partnered with to create their theaters) and like many audiences who’ve seen a movie in them, was simply amazed throughout the whole experience.

Nothing took my focus off the movie (which wasn’t even a Disney movie, but “Wonder Woman” to prevent any bias)! The sound traveled around me and even beneath me since the leather backed seats were also equipped with a subwoofer that rumbled with some of the more “explosive” moments on the screen. The picture quality of the movie was so beautiful it made even an ugly war zone great to look at (in picture quality only, obviously). I was so immersed in the movie that I didn’t even notice the people around me. 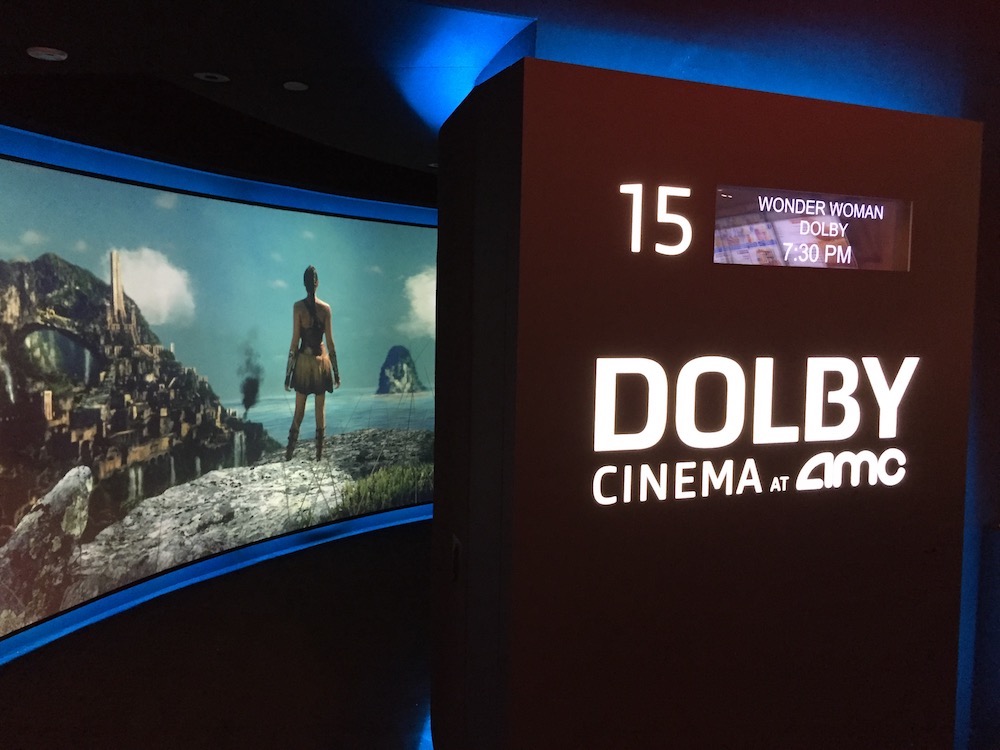 That idea of giving full control to Dolby to design the perfect theater to play other’s perfectly enhanced movies worked. It worked so much so that I probably will be watching nearly every movie in a Dolby Cinema for the remainder of my life.

This past weekend, I had the opportunity to watch the world premiere of “Cars 3” which was presented in Dolby Vision and Atmos again. But instead of comparing the experience to the fifth Disney Pirates film, I was reminded of how long Dolby has come from those initial discussions with John Lasseter and the filmmakers at Pixar.

What was going to be a conversation about how they could make enhance how sound is used in its movies ultimately has revolutionized and bettered the overarching idea of going to the movies in the first place. Bowling continued, “We’ve always wanted to aid people in fully believing that they are in the story they are seeing. And based on what people on social media are saying, they’re very much doing that.”

In many ways, that’s something that The Walt Disney Company wants you to do whenever you experience any of their theme parks or movies. Getting lost in the story is everything and if experiences like Dolby Cinema can help do that, that’s something to note. While there is a slight premium price to watching your movies in their theaters, you won’t be thinking about that once you exit the theater.

It’s all only going to get better from there, too. While Bowling didn’t mention what new innovations that the Dolby team is working on, he did assure us that they are “always talking to filmmakers, including at Disney,” to better the experience and use it to heighten the stories.

While Disney can’t publicly endorse you to watch any of their movies in Dolby Cinema (since they work with many movie theater partners to get their movies to the public), I can highly recommend seeing both Disney live-action and animated films in Dolby Cinema. While I might have spent the length of this story to explain the why these theaters are great, Dolby hopes that you don’t actually need to learn why you’re paying a little more and going out of your way to see a movie presented their way.

“You don’t need to know what technology makes this all work,” Bowling concluded. “If you fully enjoyed your Disney movie or any movie for that matter, we’re just happy you did. We know you’ll be back for more.”

Our special thanks to Stuart Bowling and Dolby for inviting us to watch our first of many movies in Dolby Cinema to help with this story!