Editor’s note: We’re excited to have Angela Reyes as a new contributor to DisneyExaminer. Enjoy her first story below recapping the highlights from the global press conference for Disney’s “Ralph Breaks The Internet.” Read her spoiler-free review of the movie HERE.

Two of the main things that impressed me about “Ralph Breaks the Internet” were the genuine, intense emotion in the film and how topics such as friendships and the negative aspects of the internet were handled in such a mature manner for a film meant for children. In a recent press junket in Los Angeles, some of the voice actors and filmmakers made their thoughts on these subjects known,

The relationship between Ralph and Vanellope is our main focus in this film, and voice actors – John C. Reilly and Sarah Silverman, respectively – explained that the friendship and connection they shared continued off-screen, as well. “We did it together,” Silverman fondly expressed, garnering many “awws” from those of us in attendance.

She explained how most of the voice actors recorded together (aside from Gal Gadot, who was said to be filming for Wonder Woman). She said that they were given a lot of time to improvise and collaborate, and often spent a little too much time doing so, “I think they always book about maybe an extra hour of time that they need because we get real chatty.” Since the friendship between Reilly and Silverman is real behind the scenes, it is no wonder their chemistry is so vivid on-screen as Ralph and Vanellope.

John C. Reilly chimed in with enthusiasm, saying how “it was a real treat to get into the studio again with Sarah” and how their “friendship has aged five years since the last film, so it tracks in a way with Ralph and Vanellope.” He was quick to admit, albeit jokingly, that Silverman is not his only friend, unlike Ralph’s situation with Vanellope. Reilly went on to describe how “starting in a place of intimacy” from the first film allowed the entire cast, not just himself and Silverman, to be able to work together much more closely and at a higher level for “Ralph Breaks the Internet.” He agreed with Silverman about the improvisation, thanking directors Phil Johnston and Rich Moore for letting them “explore things every day.”

Reilly then touched on what I had experienced while watching both “Wreck-It Ralph” and “Ralph Breaks the Internet.” He said, “I think that’s what sets both of these movies apart, is that feeling of heart and real emotion. It’s because we’re looking into each other’s eyes [ . . . ] it gives the film a soul.” He credited the genuine emotion to being able to record with his fellow castmates, and to me, this emotion is what gave the movie heart and made it so much more than a simple animated film for children. 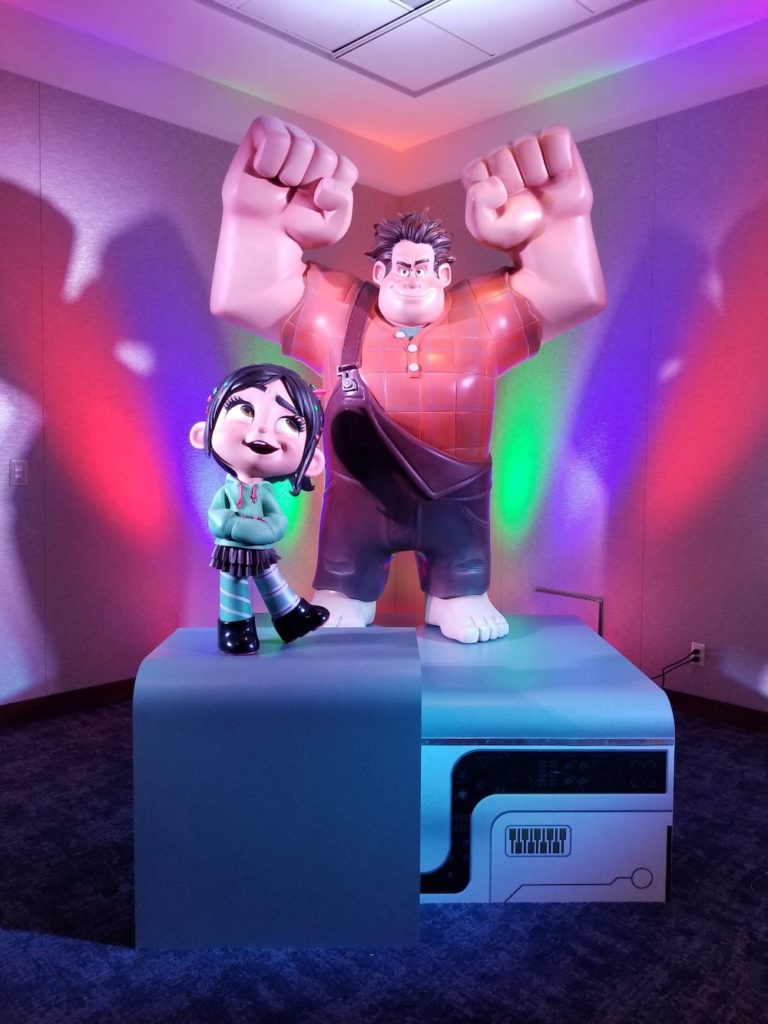 The themes that the filmmakers and voice actors mentioned and wanted both children and adults to take away from this film involved either friendships or the use of the internet. Screenwriter and voice of Snow White, Pamela Ribon, discussed the themes of friendship in relation to Vanellope and Ralph, and how the film directly mirrors real life in that “no matter how old you get, you move into a new place and you meet new friends and that you don’t have to lose your old ones.”

Silverman started on the topic of the internet, as well, saying how her generation had to “learn how to navigate it and how to protect [themselves]” but children in today’s society basically have grown up with it. She said it was complicated, because for her it was a “great place for trying out jokes” as a comedian but at the same time it has impacted her in a more serious ways. For example, she said that the internet had a hand in her, “waking up to [her] own white privilege.” She also said that with the internet, “there can be way too much of it. It’s nice as a treat,” which seems to coincide partly with Ralph’s viewpoint of the internet.

Reilly also discussed the internet as being such a big issue in the film and in our society, where popularity and acceptance is constantly sought after. He posed the question, “Why do we crave the anonymous acceptance of people we don’t know? [ . . . ] You come away from the film thinking about some of the most important issues of our time.” He expressed his hope that the story is entertaining to children, but at the same time helps to shed light on unhealthy behaviors in regards to “chasing after anonymous love” online in the form of likes or hearts and makes us ask, “Why do I do that?”

To fully understand the questions and themes these voice actors and filmmakers bring to light, and to truly feel the emotions and love between their characters, be sure to check out the film for yourself.

“Ralph Breaks the Internet” is now in theaters.