Disney and musicals go hand in hand, and few Disney films are intertwined with music more than “Beauty and the Beast.” From the 1991 film’s opening, the story and the emotion are told through song and dance. As the villagers go about their days from the very beginning of “Belle,” we are introduced to a musical performed through animation.

This June, the La Mirada Theatre for the Performing Arts—a theatre located on the border or Orange County and Los Angeles—is presenting a lively, engaging performance of “Beauty and the Beast.”

This show embodies everything we love about the classic Disney film. The songs are sung and played beautifully by the on-stage cast and orchestra. The choreography is particularly captivating, taking advantage of the smaller space and props to keep the music going. Of particular note are the special effects: on a small stage, they were able to capture the darkness of the forest, the elegance of the ballroom, and the magic of beast’s transformation. 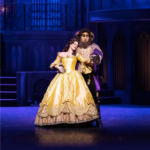 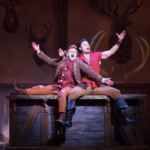 A Magical Performance of “Beauty and the Beast”

But this show is more than a genuine adaptation of “Beauty and the Beast.” There’s a particular magic about La Mirada Theatre’s performance that keeps the audience engaged and entertained.

Laurie Veldheer as Belle and Todd Adamson as the Beast blended humor with drama, and felt like real reflections of the movie’s main characters. Matthew Ragas as Gaston and Justin Charles Cowden as Lefou kept the audience laughing, along with Josh Grisetti as Lumiere and Phillip Taratula as Cogsworth, all of whom got many real belly laughs from the audience. The Ensemble as a whole created a beautifully harmonious show, while the size of the theatre made it easy to see the unique features of each and every cast member. 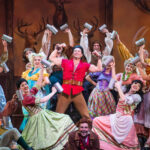 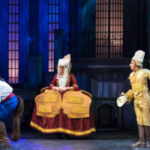 But what stands out about this show is that it makes musical theatre accessible to all. The show is diverse in both its cast and its audience. People of all ages were sitting in the audience together, sharing laughs, admiring the music and crying during the famous “I love you,” scene.

The theatre also seems to be committed to making this show, and all their shows, accessible. The building is so central to Southern California and is located in an easy-to-find plaza. The show is much more affordable, especially for those who may be interested in bringing their children or friends. Parking is even free! In addition, the theatre is offering American Sign Language-interpreted and open captioned performances as well as behind-the-scenes experiences for all who are interested.

The theatre and the show encourage community, bringing people together to experience an excellent re-telling of a favorite Disney movie.

Get your tickets for “Beauty and the Beast” at the La Mirada Theatre for the Performing Arts here! The show will only be playing during the rest of June, so be sure to buy your tickets soon.