Elle Fanning is Aurora, Angelina Jolie is Maleficent and Sam Riley is Diaval in Disney’s live-action MALEFICENT: MISTRESS OF EVIL

Editor’s note: In “Maleficent: Mistress of Evil,” Disney not only presents a sequel to a beloved Disney classic – they also morph the characters into more complex versions of their cartoon selves. It becomes harder and harder to put them into boxes labeled “hero” and “villain.”

Guest contributor Mary King reviews this new film from the perspective of a fan: one that both loved the classic “Sleeping Beauty” animated film and the recent “Maleficent” live-action movie.

When I found out that Disney’s Maleficent was going to have a sequel, I was thrilled. Like
many others, I loved the first film because it offered a unique perspective on the classic
Sleeping Beauty fairytale.

Despite my excitement, I was also a little nervous. Sequels aren’t always great, and I was worried that a second film wouldn’t do this unique story and its characters justice.

I am pleased to report, however, that as a fan of the first film, I thoroughly enjoyed
Maleficent: Mistress of Evil.

It was delightful to return to this magical world, which, in this second film, is just as visually stunning as the first. Everything had the most beautiful detail, from the landscapes and castles, to the magical creatures and intricate costumes. It was enchanting from beginning to end, just like a fairytale should be. 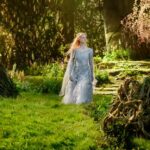 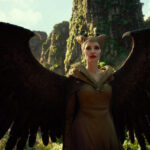 Angelina Jolie is Maleficent in Disney’s MALEFICENT: MISTRESS OF EVIL.

And yet, this fairytale also felt very modern. Aurora (Elle Fanning) and Maleficent (Angelina Jolie) with problems viewers can easily identify with. Aurora is now a young woman, stronger in her sense of self and grasping newfound independence. Maleficent still loves Aurora as her own child, but harbors some of that parental fear that as her child grows up, they might grow apart. And as the plot progresses, Aurora and Maleficent are indeed pulled apart. For a time, they go on their own separate journeys that force them to question who they really are and where they belong.

What resonated with me was the underlying message: instead of trying to fit other people’s expectations of you, it is more worthwhile to be yourself. When you are your authentic self, you will find people who love you for just that. At least, that seems to be what the main characters ultimately learn. 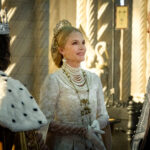 But what pulls apart Aurora and Maleficent in the first place? A conniving new character
named Queen Ingrith (Michelle Pfeiffer), the mother of Prince Phillip (Harris Dickinson) When Prince Phillip proposes to Aurora, Queen Ingrith becomes Aurora’s potential mother-in-law. Getting along with in-laws can be tough, but Queen Ingrith seems determined to undermine Maleficent from the very beginning. She’s incredibly strategic, and I enjoyed watching this brilliant new villain’s evil plans unfold.

On top of these incredible characters, I am also impressed by how the story itself
has a lot of action and unexpected twists. By the end of the film, I was absolutely enthralled.

Angelina Jolie is Maleficent in Disney’s MALEFICENT: MISTRESS OF EVIL.

At first, I didn’t know what to expect from Maleficent: Mistress of Evil. But in the end, it
continued the story down a new path excellently. I hope other Maleficent fans will enjoy the sequel’s complex characters and engaging plot as well.

This enchanting film is in theaters October 18th, 2019.