Co-director and writer Kemp Powers told us in a virtual press conference that he wanted to tell a Black story. “It was intentional,” he said. “And there was so much that we needed to get right in telling a great story using the frame of the Black experience.”

Powers was tasked with infusing a lot of that experience into the main character, Joe’s (who is Black), life. He and the Pixar team researched the culture by visiting many places where African-American people do life, like in barber shops, New York City public schools, and Soul food restaurants.

“These places and things aren’t stereotypical in my mind. And they needed to be seen in our film because they are Black,” Powers iterated.

One of the other places that the Pixar team visited were NYC jazz clubs. With jazz (“Black improvisational music,” says Powers) being another central storytelling element with Joe and his passion to play music, the team wanted to infuse the film with authentic jazz music. 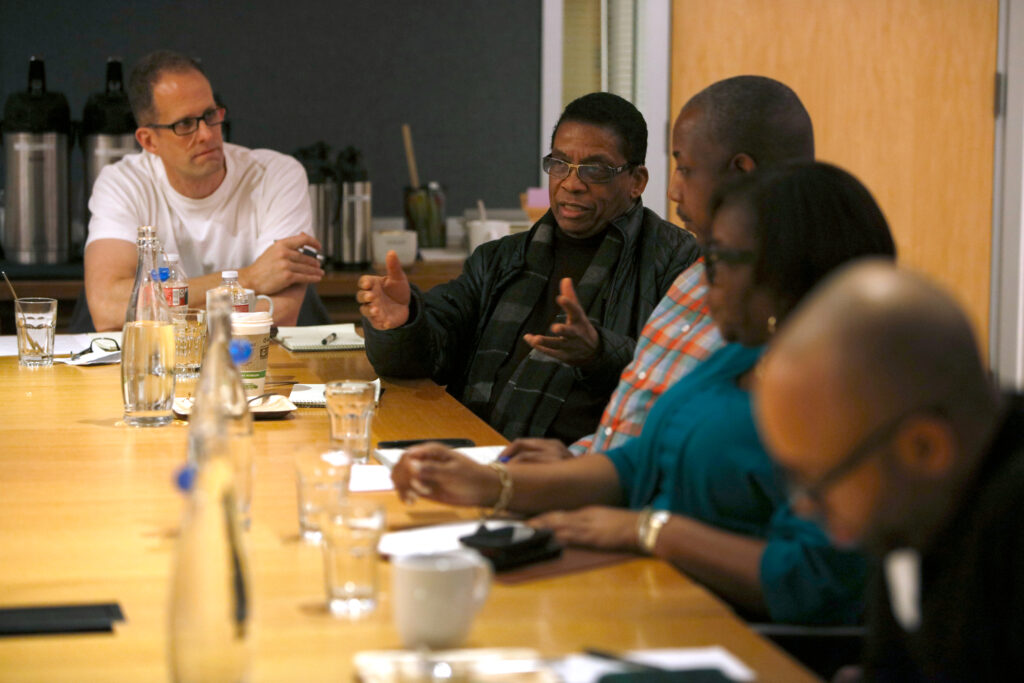 A group of music consultants, including (second from left) Herbie Hancock, meet with the “Soul” filmmakers to give feedback about the film, as seen on December 20, 2018 at Pixar Animation Studios in Emeryville, Calif. (Photo by Deborah Coleman / Pixar)

They quickly turned to Jon Batiste, a jazz virtuoso, Juilliard graduate and bandleader for The Late Show with Stephen Colbert to bring it.

“I wanted to channel the jazz greats like Thelonious Monk, Ella Fitzgerald, Louis Armstrong, and more,” said Batiste via video. “They all were great because they all did jazz in their own way.”

Batiste came up with all the jazz compositions for the film that he made sure were “accessible” and “enjoyable” for all audiences, across ages and cultures. But the most interesting thing he did was make sure the jazz spoke to the soul.

Batiste said, “There’s a life-force energy that gives jazz its spiritual and ethereal tone. Can’t think of a more appropriate way of expressing the meanings of life than with its equally appropriate tunes.”