It has been over 70 years since the first film has been released and Harmonix, developer of Rock Band and Dance Central, have been tasked with creating the latest incarnation of this classic film franchise. However, does Disney Fantasia: Music Evolved  live up to it predecessor?

In Disney Fantasia: Music Evolved, you are an apprentice of Yen Sid, the wizard from “Sorcerer’s Apprentice.” Players of this game must use motion controls via the Xbox 360 or Xbox One’s Kinect sensor to conduct music to song that they are playing. What makes this game unique from other music games is that you have to power to remix a song and even compose your own melodies/rhythms that are immediately inserted into the game. These factors can allow each gameplay of a song to stay fresh and unique each time you play it.  If you want to see a taste of the gameplay then check out this video of me playing Mozart’s “Eine Kleine Nachtmusik” on the demo version on my Xbox One.

Music is an essential part of “Fantasia” and the game’s track list does not disappoint. This game features musicians from a wide variety of genres with artists ranging from Jimi Hendrix and Lorde, to J.S Bach. It even features a song from the original movie such as “The Nutcracker Suite” by Tchaikovsky. I found that I had the most fun whenever I played classical music. It was invigorating to hear a string orchestra juxtaposed to modern instruments such as synthesizers, electric guitars, and drum kits. The game does a wonderful job in making you feel like you are a part of the song. I truly felt that I had total control of the song that I was playing.

One thing that I found puzzling was that there are no Disney songs included within the game. To be fair, the game includes a download code with three additional tracks and one of the songs included is Demi Lovato’s version of “Let it Go.” However, I feel that this game would have been the prefect opportunity to have a few songs from the massive library of Disney music. It would have been amazing to hear a song like “I Will Make a Man Out of You” from Mulan and to have the chance to remix that song.

When I heard that this game was a Kinect based game it worried me because my experiences with Xbox 360’s Kinect sensor have been shaky at best. The Xbox 360’s Kinect sensor requires a great deal of space to adequately read your body movements. When I played this game on my Xbox 360 I was presently surprised on how well it was able to read my movements in the cramped space of my room. When I was playing the game I found out that you were given the option to play seated. I tested out this mode and it worked like a charm! Playing standing up provides you with a better experience but if you are tired or in a wheelchair then you can still enjoy what this game has to offer. My experiences with the Xbox One’s Kinect were even better! I had no trouble at all having a system register my gestures. Harmonix did great job making sure that Kinect worked perfect with the game!

The music game genre is generally not known to have strong narrative driven games but I feel if you are using the Fantasia name, storytelling must be as important as the music. That is what made the original Fantasia movie so impactful. The movie masterfully fused music and storytelling. Sadly, strong storytelling is not found in this game. The basic premise of this game is that Yen Sid disappeared because this external threat called “The Noise” is wreaking havoc across the universe. You and Yen Sid’s other apprentice, Scout, must defeat “The Noise” by traveling to other realms and unlocking composition spells. Whenever I visited a realm, I felt that they were pretty to look at but world was dull and lifeless. As you complete songs in the game you have the opportunity to add life into these realms but even then I felt that these add-ons were not meaningful. In the gallery below,you can see that there some cool creatures that appeared in these worlds but I felt they did not do much to enhance the world. 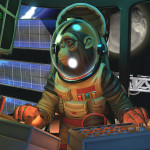 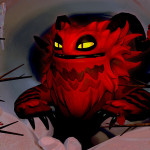 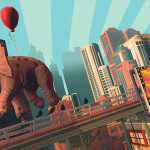 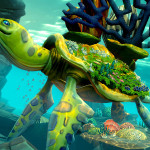 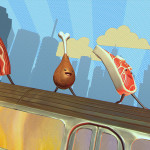 My biggest gripe with the game is its pacing. In the beginning of the game the tutorial was extremely long and a bit redundant. The games slowly guides you through each facets of the mechanics of the game and makes you repeat the process twice! After the first time I went through the tutorial I felt prepared enough to play the game. In regards with progress with the main game, it took to long to unlock each remix in every song. Every song has three mixes, the original mix and two other mixes. Each mix you unlocked is stylistically different from the original song. You have to reach a certain point thresholds to unlock each mix. However, the game only lets you unlock one mix per playthrough. It is extremely easy to blow through both thresholds in one playthrough. I did not particularly like playing a song that I did not like twice just to unlock a new mix for it. I prefer to unlock everything at once.

Yes, this game has a multiplayer mode included with it. It is a somewhat competitive mode where you and your friend both conduct a song. The game divides and assigns the gesture you have to perform. I did have fun with this mode but I had a some issues with the Xbox 360’s Kinect reading both of our body movements simultaneously. I believe that the issue was due to the insufficient amount of space that I have in my house. When we did get the Kinect to acknowledge both of our presence I felt that it struggled to register our gestures at various times.

Overall, I enjoyed playing Disney Fantasia: Music Evolved. Harmonix did an excellent job with this game. This game is a very unique music game with a wide variety of music for you to enjoy.  If you are looking a game to use with your Xbox 360 or Xbox One’s Kinect sensor then I highly recommend that you pick this one up. It is one of the best Kinect games that I have played. Disney Fantasia: Music Evolved is a great way for you to get off the couch and lead a more active lifestyle!

This game is available now on for download on Xbox Live or at your nearest retailer that sells game. You can purchase this game for $59.99 on Xbox One or $49.99 on Xbox 360.

For this review, I played the Xbox 360 version of the game provided free of charge from Disney Interactive. To read our first impression story, click HERE.

Have you tried your hand at conducting yet? What do you love about the game? Would you give Disney Fantasia: Music Evolved as a gift this Christmas season? Comment and tell us below!